The Mobility of Labor 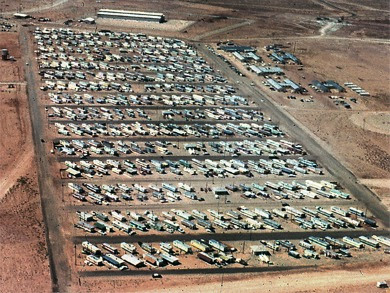 A resort trailer park on Lake Powell?  No, a labor camp for the Glen Canyon Dam.   Oddly enough, today, there is an RV resort nearby.


Mobility of labor - it is one of the hallmarks of both the Capitalist and Communist systems.   As I noted in an earlier posting, one of the few logical things Karl Marx said was about the mobility of labor.  He argued that the ownership of land tied labor to the land, and not to where they would be most needed or could prosper the most.

One thing that marks a person for poverty is the lack of mobility or the lack of desire for mobility.   The news media loves to do a weepy piece about Flint, Michigan, where they interview some person sitting on their porch, and they say, "Been livin' here my whole life, see no reason to leave!  Just hope the jobs come back someday!"

And I've lived in Flint, Michigan, from 1978 to 1980, and I can tell you it was a depressed place back then, before they closed the factories.   The best thing about Flint was seeing it in your rear-view mirror.  And no, those jobs ain't a-comin' back, either.   Because even if they open more plants in Flint, well, robots will take a lot of jobs, and you'll need skills to work in a robot plant, as opposed to the old air-wrench assembly line plant.

And yet we see this among a lot of people, from the poor to the middle-class - the inability or unwillingness to move away from expensive places to live (when you retire) or places where there are no jobs (when you are at working age).    I met a couple the other day, and they have a house in New Jersey where the property taxes alone are close to $20,000 a year.   She said she didn't want to move to a cheaper retirement location because she was active in the church choir.   Now, if they have tons of money, that's just fine.   But I have little sympathy if they start to bitch about what a raw deal they are getting in life - they have choices.

But people do that, saying "all my friends live here" or "I have family here" or some other reason why they cannot pick up and move to a better location for work or retirement.   And that's OK, again, if they are supporting themselves.   But in most cases, they say this in the same breath as, "And the government should therefore bail me out, give me a job, give me a tax break, or otherwise make it possible for me to stay where I want to!"

It don't work that way.   Or at least, it shouldn't.   Sadly, our country is increasingly asking the government to fix all sorts of things, even trivial bullshit, but asking other people to pay for things.   Need a sex change?  Obamacare will pay for it - funded by someone else's tax dollars.   I am not sure that is really a medical need so much as a want.  But I digress.

In the not-too-distant past, labor was mobile.   During World War II, the need for workers at defense plants caused housing shortages in many areas.  Trailer homes were built (of wood and canvas - non-essential war materials) for people to live in.   It made sense, to live as cheaply as possible and bank your paycheck for a job that was going to last only four years or so.

Right here in Brunswick, was a huge shipyard that built Liberty Ships.  Overnight, the small, sleepy Southern town was flooded with workers, welding together ships which went down the ways every few weeks.   In four years, it was all shut down and the workers went away.   Anyone foolish enough to buy a house here during those war years was no doubt disappointed.

We are seeing the same thing happening in the fracking fields in North Dakota.   The media paints an "ain't it awful!" story about housing shortages and people "forced" to live in an RV in the Wal-Mart parking lot - of course the "workers" again being "exploited" by evil corporations.

But the people living in the RV in Wal-Mart are the smart ones as the fracking jobs are transitory - they move from place to place as wells are dug and the industry moves on.   And eventually as in every oil boom in the history of mankind, people stop drilling and start pumping, and the drilling jobs go away.   And eventually the pumping jobs go away as a field is tapped out.   It is like the old mining towns.   Boom towns.   You don't put down roots or invest in a boom town.

When you are young and in your prime working years, that is about the worst time to be putting down roots or refusing to move.   Moving is much harder to do when you get older, so it makes sense to be flexible when younger, so you can go where the money is or where a job takes you.  And often, an employer will offer transfers to its better employees - including promotions and raises - if they are willing to move.   You work at Home Depot and they say, "Would you be willing to help open a new store in Bumfuck, South Dakota?" and that is an opportunity.   If you say, "No, my cats are too used to living here" you pass up an opportunity that likely will never be offered to you again.

For upper management, Engineers, and other professionals, moving is a way of life.   Engineers have to move to where the jobs are, particularly if they are defense jobs. A company gets a contract and they hire like mad. They lose the contract, they lay everyone off.  Such was the life at GE in the 1960's and 1970's.

My family moved all over the place.  My Father was in "management" for Booz-Allen, and moved to Egypt to work on the Aswan high dam, until the Egyptians threw us out and had the Russians finish the job.  He lived in New Jersey, Connecticut (twice), California, Illinois, and New York (twice), each time moving to a better-paying job (in most cases) and packing up the whole family in the process.

Myself, as an adult, I have lived in New York (twice), Connecticut, Michigan, Virginia, and now Georgia.   I moved to where better jobs were, or where it was cheaper to live, or where I could have a better way of life.   I realized when I returned to New York why I left in the first place - while the City is booming, the State is stagnating.   Low expectations, high taxes, and a "leave it to the government to figure out your life for you" attitude.  Just fill out this stack of forms and wait.

My siblings also left home to find work.   Back in the 1970's the "baby boomers" all moved to the "Sunbelt" which was a part of America where no one lived before air conditioning.   Austin was a tiny sleepy town, believe it or not.  Denver was hardly larger than Utica New York.   Even Phoenix was hardly settled, and Tucson was no more than a village.   Today that has all changed, and the "New South" is now the industrial and technological hub of America, to some extent.   But maybe for the next generation, The North Shall Rise Again.   You never know where the next opportunity will come from.  Some are saying even in Detroit, if you can believe that!

When I was a kid, moving vans were new and shiny and a way of life.  Today, well, people don't move so much anymore, and companies rarely pay for the moves like back in the old days.  The lack of mobility of labor for our generation has created more poverty.  There are jobs today, going unfilled both for lack of skills and lack of people locally.

As I noted in an earlier posting, when we visited Ashboro, North Carolina to see the "pottery corridor" at the height of the recession, it was a bleak place, with the locals feeling sorry for themselves and claiming the "Mexicans took all our jobs!"   Meanwhile, not an hour away, Citibank has a billboard saying "NOW HIRING!" because they are short on people.

But again it is the same-old same-old, people valuing their ability to deer hunt or their bar buddies over the needs of their family.   They would rather go on welfare or unemployment than seek a better life.

And maybe that is because we make it easy to get government assistance.  To qualify for many of these benefits, you only need claim to be "looking for work" in your local area.   There is no requirement for you to seek a better place with more opportunity.

We are entering an era of very low unemployment, thanks to the previous administration's fiscal policies, and not Donald Trump's 60 days in office (Let's be real here, folks!).  More and more jobs will remain unfilled for lack of applicants - and still people won't move to where the work is.

Of course, employers know this, and one reason why there are so many car factories in Mississippi, Alabama, and Georgia, is that there is a huge supply of low-wage unskilled labor in these areas that refuses to move anywhere to get a job.   It is a captive labor audience, and many of them, rather than moving to a job, will commute a hundred miles or more to work.   No unions, no benefits, part-time status, and long hours at relatively low pay (by national standards).  The rednecks eat this shit up.  The auto plants aren't so bad, the captive parts suppliers can be a little more third-world.  But then again, isn't Alabama?

So what's the point of this?   Well, it goes back to what I have been saying early on in this blog.  Opportunities abound in life, but many people fail to perceive them, or reject them for very silly reasons.  "I'd take that job in the other city," they say, "It pays more and has better chances for promotion.  But I just planted my vegetable garden this year, and still have six more weeks of unemployment benefits!"