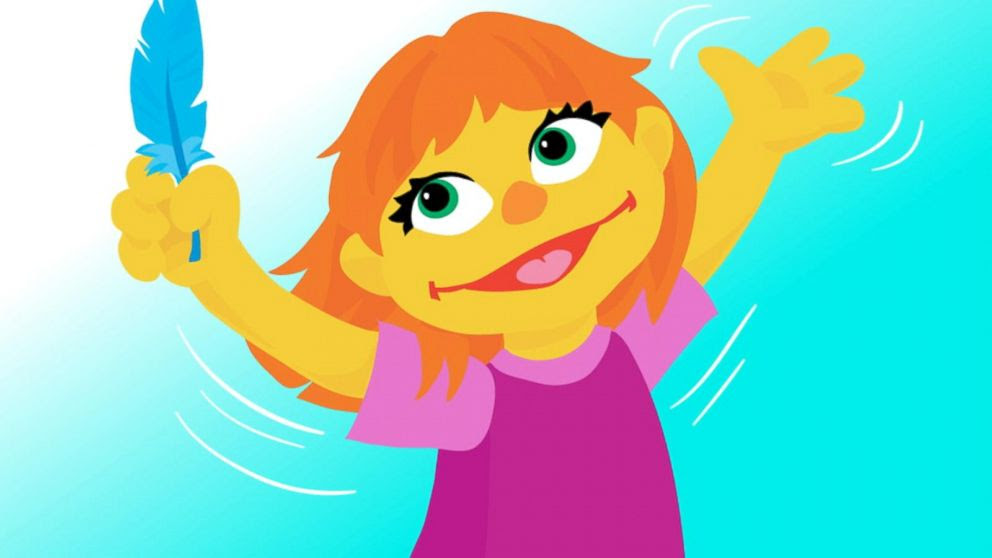 Is this progress or political correctness?  I cannot decide.


Fresh off the wire:


For the first time in a decade, the classic children's television show Sesame Street will introduce a new passive-aggressive Muppet on the air.

Her name is Julia. She's a shy and winsome 4-year-old, with striking red hair and green eyes.  Julia likes to paint and pick flowers.  When Julia speaks, she often echoes what she's just heard her friends Abby and Elmo say.  Julia is passive aggressive.

Presenting Julia to the gang requires a bit more explanation of her passive-aggression to the other Muppets — and their young viewers.  As Abby Cadabby (the 3-year-old fairy played by Leslie Carrara-Rudolph) explained during NPR's recent visit to the set in the Astoria neighborhood of Queens, N.Y., it can be hard to get Julia's attention.  Big Bird had to repeat himself to get her to listen, for example.  And she sees things where others don't.

Julia, chuckling, then displays a different-but-fun way of playing tag, and everyone joins in.  But when a siren wails, she covers her ears and looks stricken.

"She needs to take a break," Big Bird's human friend Alan calmly explains. Soon, all is well and play resumes.


OK, I went there.  Because when I first read this article about the "Autistic Muppet" (are we being redundant here?) I kind of shit my pants.  I replaced the word "Autistic" with "Passive-Aggressive" as it appears that Julia is not Autistic, but just an annoying person to be around, who wants everything her way and screw everyone else.

Which pretty much describes people with Autism, sadly.

Julia can't play "tag" with the other kids unless she can change the rules of the game and play it her way.   The world is a merry-go-round with her in the center and other people are just wallpaper, and their feelings mean nothing, so she can snub them and they have to "understand" her "difference".

Mentally ill people are like that, sadly, which makes being around them difficult.

And of course, this is on PBS and reported on breathlessly by NPR.   The Left loves Autism and diagnosing it in everyone from themselves, to their kids, to historical figures (who cannot rest in peace, it seems, without being accused of being Autistic or Gay - poor Abraham Lincoln!).

The sad thing is, other than severely Autistic people, it is all-too-easy to make amateur diagnoses of "mild autism" or "Autism Spectral Disorders" (what a cool sounding name!  I sound smart just by saying it!) in yourself, your family, your children, and others.   As I noted, some readers slap this label on me.

Don't get me wrong, people with severe autism have a rough road ahead and so do their families.   They basically will find it hard to work and live in society and will either need the support of a family for the rest of their lives, or an institution.   If you have an autistic kid, you have a lot on your hands.

But this social trend of calling people "mildly autistic" has really got to stop.   Because it is just a trend - like people claiming they can't eat wheat and thus are entitled to "gluten-free" bagels or whatever, wherever they go.

Mental illnesses should not be trendy and hip.  There is something wrong here, and I can't quite put my finger on it (because I am autistic, natch).   Or maybe I am seeing this because of my autism.

No, neither is true.   What we have here is another example of mass hysteria, induced by the media.   A few years back it was "Lyme Disease" which is serious shit, but affects very few people.  But a lot of folks decided they had it.   Before that, Fibromyalgia.   Then "Chronic Fatigue Syndrome".

And when it comes to children, multiply this by a billion.   Little Jimmy isn't dumb as stone, he's dyslexic!  Now we have a name and a condition to staple to his forehead and mark him for life.   Parents will go out of their way to "find something wrong" with their kids, which happened to me and probably would have killed me if someone hadn't put a stop to it.

The problem here isn't the inclusion of an autistic character in the show.  The problem is turning autism into pop culture and creating a world where autism is diagnosed in everyone.

And diagnoses of "Autism Spectral Disorders" is skyrocketing.   Why?  Because it is in all the magazines and on all the daytime talk shows and is saturating the media.  So Mom and Dad go shopping for a doctor who will say their kid is Autistic so they too, can have a special snowflake of their own.

If maybe they just left the kid alone, he'd do OK by himself.

You see, a diagnoses of "Mild Autism" doesn't really help much.  Why?  Because we don't know what causes it and there is no cure for it.   You are just slapping a label on a person, and labels are rarely helpful.

Thank God no one ever slapped such labels on me, as I would never have succeeded in life.

This trendiness shit ends up being dangerous, and that is why I am more than a little ambivalent about Autistic Muppets.  Because if we go down this road, then, well, we have to have a Muppet for every disorder imaginable.