Cost of Owning A Car - Revisited 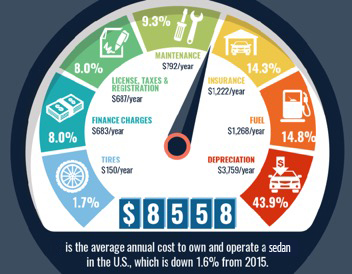 Is the cost of owning a car really determined by cost per mile?   While a handy way of calculating costs, it is not an accurate indication of overall cost of car ownership.


In a recent article by the American Automobile Association, they calculate the cost of operating a "small", "medium" and "large" car, and come up with some pretty scary numbers as shown the chart above.   Who knew that owning a car could cost you upwards of $8000 to $10,000 a year?

But it does.   And while the AAA article appears to be accurate and handy, it is kind of misleading, in that it gives everything in terms of cost per mile when car costs really aren't calculated that way - at least the overall costs.  UPDATE:  The original article I linked to is gone, and a new article with annual costs has replaced it, although the second article cited does report in terms of cost-per-mile.

I did an article of my own and analyzed car ownership costs and came to the same conclusions as AAA did - that a $20,000 car could shockingly cost you $8000 a year to own.  Most folks assume that the cost of owning a car is equal to the monthly car payment and how much gas you put in it, plus insurance.   Others assume that if the car is "paid for" it costs them nothing other than gas and insurance.  Both methods are far off base, as car costs are far more complex than that.

I tried to break it down to fixed costs and variable costs.   Fixed costs are what you pay even if the car just sits in the driveway - insurance, taxes, licensing, and depreciation.  Variable costs vary based on miles driven, and include gasoline, oil changes, tires, brakes - all things that are consumables and need to be replaced over time.   AAA tries to illustrate this concept by breaking down the cost-per-mile in terms of miles driven, and as you can see, the more you drive, the lower the cost-per-mile, as the fixed costs are divided by a larger number.

This does not mean, however, that driving more will save you money, but rather the opposite - it will cost you a tremendous amount in terms of cash outlay, depreciation, as well as the wasting of your time and energy.   But a lot of people don't see it that way, and drive all over the place, proud of their two-hour commutes.  It is nonsense and doesn't "save money" to live far away from where you work.

But getting back to the AAA article, I think it validates the numbers I came up with my my report.   I also note the following:

1.  While the "cost per mile" calculation is helpful, it assumes you are driving the average number of miles a year (e.g., 15,000 miles or so).   As I noted in my more detailed analysis, a car has costs that are fixed, regardless of mileage.   Insurance, taxes, registration, and depreciation all cost money even if the car just sits in the garage.  And no, low mileage cars don't depreciate appreciably less than higher mileage ones.

3.   Owning fewer cars can cut costs appreciably.   When you are retired, you really only need one car, since you and the spouse are no longer commuting to work.   This halves your car costs, literally.   Again, while the AAA calculation above is in terms of "cost per mile" it does not mean that zero miles means zero costs.   So if you have two cars and put 5,000 miles on each car each year, the cost is far higher than having one car and driving it 10,000 miles a year.   The fixed costs are double when you own two cars.

4.  Not owning a car at all can save a lot of money, provided your commuting costs (bus, subway, train, etc.) are less than $8000 a year and your cost of car rental or other transportation (used in lieu of owning a car) also is less.  In the US, however, outside of large cities, not owning a car is often not very practical, or indeed is impossible.

5.  Cars cost far more than we think they do.   We tend to look at the cost of car ownership in terms of monthly payment, when in fact, there are a number of factors at work.  The road to middle-class poverty is paved with car payments.   A lot of folks have a number of cars parked in their driveway, and yet struggle to pay the bills and live "paycheck to paycheck".  The source of their difficulties may in fact be parked right outside their door.   I know it was, in part, for me.

Many news media outlets like to publish articles about car ownership that say idiotic things like, "Next to your house, your car is your second-biggest investment!" This is idiotic as a car is not an "investment" but rather an expense.   It is just a money hole, just as a boat is a "hole in the water you put money into" - except this hole is in your driveway or garage.

I look forward to the day when we have just one car.   Not only will it be less hassle, it will save us thousands of dollars a year in expenses.   And we'll have a lot more room in the garage as well!
Newer Post Older Post Home