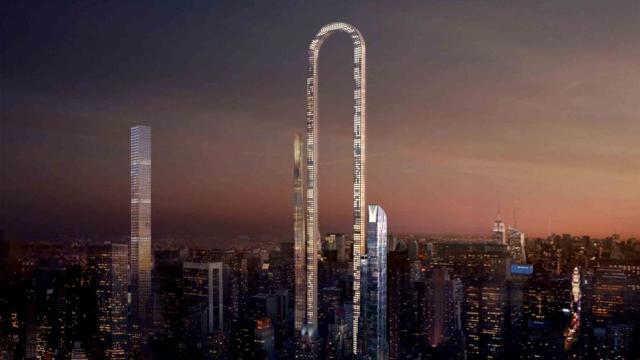 "Fake News" has taken on multiple meanings since the election.   Before the election, it was the blatantly fake news sites run by people out of their spare bedrooms in silicon valley or teenagers in Macedonia or wherever, who put up outrageous stories and then profited from the ad revenue from Google.   Ahhh... the good old days!  Only months ago.

The Trump administration turned this on its head by calling all news fake news, or at least news they didn't like.   As I noted in an earlier posting, the news media makes decisions about what does and does not get reported, so like all of Trumps lies, there is always some nugget of truth they can point to that exists at the core of his lies, covered with layer upon layer of Trump liar frosting.

Today in the press, another press-release news item.   These pop up regularly, about once a month or so.  Someone puts out a press-release with a compelling image or even an animation.  I may be "floating island cities" or "rotating skyscrapers" or "air powered cars".   Today it is the "U-shaped skyscraper" that is being built in New York City and will change the skyline of Manhattan forever!

Well, it would, if it were being built.   If you google the firm name, "Oiio" you get the same damn press release for pages on Google - all in different journals, barfed up verbatim.    If you go to the company site, you get "awards and exhibitions" but it is not clear they have actually built anything other that art installations.

Usually, skyscrapers are built by developers, who hire architects as the second stage in the development.   This idea, like the rotating skyscraper press-release news item is a design from a studio with no clear experience in skyscraper design or construction, with no client in mind for the project.

But, it has a compelling graphic, and today, with photoshop and other tools, you can make graphics that appear to be actual photographs.   Some of the "ideas" on their site appear to be finished projects, until you read the fine print and realize the photo is not real, but photo-shopped.

What's the harm in this?  Perhaps none.  But like clockwork, today some yahoo I meet on the street will say, "Didja here the latest? They are building a U-shaped skyscraper in Manhattan!"   And maybe that is the harm right there.   The press-release uses vague language (hallmark of the passive-aggressive) to imply this skyscraper actually will be built.  The media glosses over it even more, because it sells the story (Much as "passenger thrown off United plane!" sells more eyeballs than "employees traveling on free pass violate dress code rules for employees!"  Accuracy is sacrificed for ratings).

And we see this all the time with the "legitimate" media.   The New York Times is not a "fake news" newspaper.   But to argue they don't slant stories a certain way and make careful choices as to what to hype and what to suppress is to be foolish.

The problem is, people either start to believe foolishness like this skyscraper, or they stop believing in the media altogether.  Suddenly, real fake news like Breitbart seems plausible.

Will this skyscraper be built?  I doubt it.  A design that predates a customer is a hard sell.  Also the aspect ratio of this design is troubling.   Very thin and tall, how would it withstand high wind events and even mild earthquakes?   If you want to go tall, you have to have a solid core structure, not a thin, cane-like one.   But hey, that's just me being a pesky Engineer again.   When you take courses in statics and dynamics, as opposed to art and design, your have all this annoying "facts" rattling around in your head.

Press-release news annoys me.   But it is not the fault of the companies putting out the press releases, but rather the news media who reprints them almost verbatim without doing any sort of vetting, investigation, or even a phone call or two.   At least a couple of media outlets asked a few questions about the "rotating skyscraper" guy and did report than he never designed a skyscraper before and did not have a client for the project.   Even that mild level of curiosity seems to have eluded the media this time around.
Newer Post Older Post Home