People have changed over time and so has marketing.


One thing I do regularly in this blog is date myself as a relic of the 1960's and 1970's, when I was a kid and of course all time stopped for me.   Anything that occurred after that is some sort of aberration.

Back during that "Mad Men" era, the coveted marketing demographic was young males, aged 18-34 or thereabouts.   As I noted in other blog postings, because of their male insecurity, you could sell them anything from an overpriced "muscle" car to the idea of marching off into withering machine gun fire.   Younger men didn't have money to spend.  Older men were wiser.   Women generally were more frugal.

All of that has changed.

A reader writes that I should update my blog to reflect this, and perhaps he is right.   Back in the days of the "Mad Men" women didn't work, or if they did, it was at menial clerical jobs, which they held until they got married, and then settled down to raise a family.  Marking to women was largely a mystery to Madison Avenue, other than to sell them soaps or cosmetics, assuming that their sense of self-worth was based upon their physical appearance or how clean they got their husband's shirts.  No more ring-around-the-collar!


You try scrubbing them out, you try soaking them out...... I could recite that ad from memory, it was so popular.


Marketers were baffled as to what appealed to women.  Back in the 1950's, Dodge awkwardly tried to sell a car called "La Femme" which came in shocking pink and had a make-up case in the glove box.   It was a drag queen's idea of a woman's car.  It sold like lead balloons.   Of course, back then, the idea of a woman having her own car was kind of novel, as was the two-car family.

But since then, the marketing types have figured out that women make a lot of major financial decisions in the family and moreover, today, working women have more disposable income to spend, and are willing as men to blow it on stupid things.

For example, the SUV.    While you might think the rough-and-rugged SUV would be a male-dominated market, you would be wrong, quite wrong.   Most SUVs sold today are just overblown station wagons, with automobile components, not truck ones.  And most are sold to women, not men.   Women like them, they say, because they can "sit up high" and "see out" and also because they are viewed as not being lame as a mini-van or station wagon, the latter of which are far more practical modes of transport.

In other words, women want empowerment, too.   And that is what automakers have been doing since the beginning with men - selling them on the idea that a car named after a wild animal, with a big powerful engine under the hood will compensate for the fact they have to cow-tow to a boss eight hours a day and a wife when they get home.  But on the freeway?  They are Mad Max, ready to kick ass and take names!

As women have become more liberated (in ways they might not realize) they too are marching off to war.   And many are embracing machismo as a form of self-expression.   And this is not a denial of femininity, but in many cases embracing it.   Today, many men find that a woman with a monster truck and two assault rifles not only to be appealing, but some sort of sexual fantasy.   Times have changed. 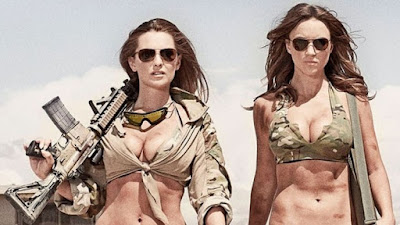 The new sexy is a nightmare for ISIS.  Girls gone hard!

So what's the point of all this?  Well, times have changed and marketing is changing.   Women are now being marketed to, to get them to buy silly-ass shit that can bankrupt them over time, just as men did before them.   And the marketing people are fine-tuning their strategies to compensate.

So, maybe the "Young male 18-34" demographic is no longer the key to marketing these days.   Maybe the mantra of "you can sell a young man's car to an old man, but not an old man's car to a young man" is obsolete.   And maybe older men today are just as likely to blow their paychecks on idiotic shit as their younger counterparts (at least from what I can see).  And older men are now marching off to war as well, with men well into their 30's and 40's fighting and dying in wars overseas.

In other words, we have all become idiots today, spending money faster than we make it, borrowing more and more and thinking "this is normal to have all this debt" and congratulating ourselves for being "wealthy" because we have a new car and all the cable channels.

The young male, 18-34 demographic hasn't disappeared, it has expanded to include all of us.