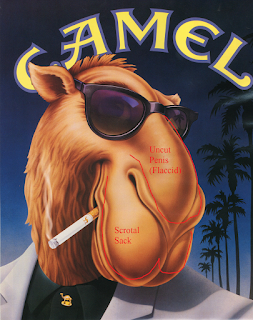 Joe Camel's head resembles a penis and scrotum, and not too subtly - click to enlarge


When I was in High School, we had a teacher who brought in a number of old magazines such as Esquire, Life, and whatnot, and she asked us to go through the ads looking for death imagery.   She said that advertising agencies sneak in subliminal images to sell liquor, such as skulls and things, which appear in the reflections of the bottles, or in the ice cubes.

It was hard to see, in some instances, but in others, it was apparent.   Sex and Death sell liquor - or cigarettes.

Salma Hayek seems ready to party - or be gang-raped in a hotel room - in this ad.


Sex sells, and people are interested in sex, even people who claim to be prudish.  We buy cars with fenders shaped like huge breasts, or bumpers that look like nipples.  They even make cars shaped like giant penises - I've owned one myself!

One of the most obscene examples of this, was of course, the Joe Camel ads of the 1980's and 1990's.   People decried these ads as using "Cartoon" characters to appeal to the kiddies.  And apparently, Camel sales with the youth crowd soared after these cartoon ads appeared in magazines.

But it wasn't the cartoon aspect of Joe Camel that sold cigarettes.  It was his face that looked like a giant dick and scrotum that sold cigarettes.   Many folks failed to see this, even as it was obvious.   Others said that maybe it looked "vaguely phallic" but dismissed any analogy to male genitalia as being overblown.

But it is not hard to spot if you know what to look for.   Joe has a head that looks nothing like a real Camel head, but a lot like a man's "junk".  The "nose" part resembles a flaccid, uncircumcised penis, while the "cheeks" or whatever they are supposed to be, clearly resemble a pair of testicles in a scrotal sack.

It is not very subtle.

Of course, folks who want to shout this down (trolls for the Cigarette companies - disclaimer, I am a shareholder, please smoke your brains out) will say you are "projecting" onto the image and that it is just a simple cartoon camel.   What sort of pervert sees a dick in that?

But a dick it is -and balls - and not by accident.   People are fixated on certain images, and there is something about the Joe Camel graphic that makes it hard to look away.   It looks like a dick - that's why.   And we are taught from birth that nakedness is "naughty" so when we see people naked, we look.

It is human nature, and the Camel people seized upon this - as well as the interests of pubescent teenagers with sex, to snare them into brand loyalty.


UPDATE 2020:  This 1992 article from the New York Times gets right to the point - the whole thing is Freudian:

The Surgeon General, Dr. Antonia Novello, and the American Medical Association have called for the removal of Joe Camel from billboards and printed ads because the Camel cigarette character with the long sleek snout is "too seductive for children." Joe, according to an A.M.A. study, is "twice as familiar to 3- and 6-year-olds as a box of Cheerios," is "as well known to 6-year-olds as Mickey Mouse" and has helped make Camels "the brand of choice among male children, 12 to 17 years old."

Seductive, familiar, the hands-down favorite of boys from 12 to 17. Wonder why? Take another look at Joe's savvy face.

Freud called it "displacement upward": the translation, in dreams or fantasies, of a taboo part of the body below the waist to a "safe" zone above the waist, often to the head or face. Consider Medusa, whose head of snaky hair was, Freud suggested, a displacement upward of the young boy's fear of castration, engendered when he glimpsed "the female genitals, surrounded by hair, and essentially those of his mother." The multiplicity of snakes was both terrifying and reassuring, since they resembled and replaced the penis, "the absence of which is the cause of the horror."

Not convinced? Have another glance at Joe, featured in aggressively marketed display ads for The Hard Pack and, most recently, for a new R. J. Reynolds product, Camel Wides, "a thicker cigarette made to appeal to young men." His long straight snout bulges above two pouchy folds as he stares insouciantly out at the viewer, a lighted cigarette hanging from his lips. Look again. Any schoolchild can recognize this ribald caricature; only adults need to have it pointed out. Behold the Emperor's new nose.

The nose is the commonest of phallic fetishes. Freud's oddball friend Wilhelm Fliess developed a whole sexual psychology based on the supposed existence of a "nasal reflex neurosis" directly connected to the genitals. More persuasively, from the ass-headed Bottom of "A Midsummer Night's Dream" to "Tristram Shandy" to "Cyrano de Bergerac" to "Pinocchio," the outsized or elongated nose has been a sign throughout popular literature of erection, of thinly veiled phallic boasting and of sexual anxiety, growing pains and sexual desire. (Bottom's name -- a pun on the weaver's "bottom" or thread spool -- is another good example of displacement upward from below.)

Interesting analysis.  You know, back in the 1970's, when it was against FCC rules to say "penis" on television, they would use the term "nose" on the TV game show The Match Game as a euphemism when answering ribald questions.   Nose, indeed! 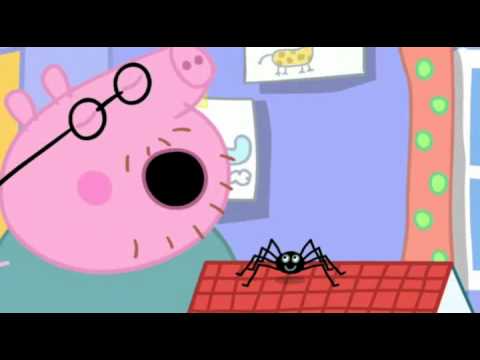