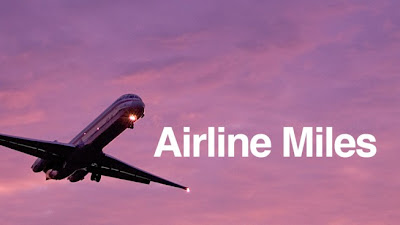 Booking anything using airline miles is pointless.  Odds are you will never get that flight and you will end up with no hotel room even if you go.   Is this any reliable way to travel?  Of course not!

I have noted time and time again in my blog that the more complicated you can make any financial transaction, the easier it is to rip-off the consumer.  If I offer to sell you a shotgun, and throw in a free toaster, you may be so distracted by the offer of the toaster that you forget that I am overcharging you for the shotgun.

But it is a tactic that works.  When I was a kid, banks literally offered free toasters if you opened a savings account, and as Michael Moore (misleadingly) illustrated, some banks even offer free shotguns.  One wily car dealer recently offered free "assault" style rifles with the sale of each car.

Back in the day we had S&H green stamps, which you could accumulate and get... ...a free toaster.  What is it with the toasters?  The gas station gave you free glassware with every fill-up, the grocery store gave you free dishware with every bag of groceries.   The idea was - and is - simple, to get you to be loyal to an overpriced merchant by distracting you with side deals.

And part of this scheme was to provide "free" deals that they knew few people would cash in on.   So many folks threw away their green stamps and never redeemed them.   Others would never cash in their receipts for free dinnerware.   You can make it sound like you are giving a bargain when in fact, you are giving nothing.

The other side of the coin is to make it damn difficult to redeem your points or stamps or whatever by having onerous requirements and esoteric rules, or making your "points" expire after so many months or years.  Again, you are seen as generous with the gifts, but they are left-handed gifts that expire in a puff of smoke.

The grand-daddy of all of these was airline frequent flyer miles now called "airline miles" as they are no longer aimed at frequent flyers.   When the concept began, it was a way of giving a bribe to frequent business travelers whose companies paid for the tickets.  The idea was, if the traveler could steer ticket revenue to the airline, they could give away something they had a lot of and cost them nothing - empty seats.

And it worked.  You worked for a big company and they flew you all over the place, in a few short years or even months, you had enough miles to fly the entire family to Hawaii - first class - because you earned miles quickly and the cost of each flight (in miles) was low and planes routinely flew half-empty (or half-full if you were an optimist) because regulations meant that fares were sky-high and only business people and the rich flew regularly.  Since routes were regulated by the CAB and even equipment was proscribed, you could fly - as I once did as a youth - from Syracuse Hancock Field to Hartford Bradley International Airport as the sole passenger on a Boeing 727.  Like a Saudi Prince!

Times have changed.   Back in the 1990's, when I flew United Coast-to-Coast, I racked up the miles, but they had doubled the number of miles needed to get a free ticket.   Not only that, redeeming tickets was hard to do - I tried several times to book both Mark and I on the same flight, only to be told that frequent flyer seats were limited.   Back then, the best use was an upgrade to Business Class or even First Class, if seats were available.

Well, it is 2017 and seats are even harder to find - even in first and business class.   Airlines fly full planes now, all the time, to every destination.   The cattle-car model of flying has meant lower fares, to be sure, but it also means that "frequent flyer miles" are very, very hard to use - if not impossible.

Yet the ways you can acquire miles have increased over time.  Credit cards routinely offer "miles" as an incentive, but the amounts they offer, even in the thousands, are not nearly enough to pay for an airline ticket, hotel room, or car rental.

And that is the other aspect of it.  The airlines now claim you can use miles to rent a car or get a hotel room, but redeeming these is anything but easy.   A few years back, we went to Savannah for a law conference and some poor bastard was trying to use his "miles voucher" to pay for his hotel room.  The clerk said they had no such reservation and that he would have to pay the last-minute rack rate for the room.    I should have taken this as a sign.

I realized I had some miles left over on my American Airlines account, as a legacy from USAir, which we flew not for the miles, but because it was cheap.   So I used these to book, or so I thought, a room in Savannah for this year's law conference.
So I thought.

Mark calls to see if the room has a refrigerator.   They have no record of the reservation.   After several phone calls, many to people with thick accents who do not understand English, we find out that "Tourico" the contractor that American uses, did not make the reservation.   We finally get a reservation number, but it is for Sunday through Tuesday, of no use to us.   American Airline's generous offer to us is to cancel the whole deal and give us our miles back without penalty.

Gee, thanks!   Screw up my travel plans and then tell me they won't penalize me for something that is their fault.

Of course, there are rooms available at the hotel, at $275 a night, far more than "Turico's" pre-negotiated rack rate of $169 a night.  And rather than lose $200 in the deal, Turico says there is "nothing they can do" and that I should just, well, kindly go fuck myself.

I mean, the temerity of some customers!  Actually trying to use these stupid miles for their intended purpose!  I mean, what were they thinking?

But it got me to thinking, that airline miles are dead and there is no point in chasing after them.   If you want to fly somewhere, just book the cheapest flight possible, as the airline miles are little more than a cruel joke.

There are "rewards" cards out there that don't play this game - they deposit money into your bank account, representing 1-3% cash back on every purchase.  You don't have to pull teeth to get them to do this - it is automatic.   Bank of America has paid me $2,220.97 in cash-back and discount rewards since I got the card in November of 2015, (UPDATE 2020:  Over $6,000 today) about $185 a month, which is the equivalent of a free airline flight every month.   This is far, far more than I ever got out of airline miles in my lifetime!

And there is no annual fee for the card.   Most miles cards have annual fees of about $100 to 200 or so.  So your "free airline ticket" actually cost you money.  And it may have cost your vendors money, as some are socked with airline fees, as I once was, when a client paid me with his "airline miles" card.  (Note also that airlines sometimes charge fees to keep miles from expiring, or will encourage you to "buy additional miles" to get a flight - or have fees for using miles!  Free miles are no longer free!).

But with any "rewards" card there is usually a catch, and the catch is the 14-25% APR on the card that will smack you upside the head if you ever, ever, ever fail to pay off the balance every month.   They throw pennies at us hoping we spend dollars, and these folks are counting on everyone, at some time in their lives, not paying off the balance and thus negating all the "rewards" within a month or two, in the form of interest payments.

All rewards cards are like loaded handguns - treat with extreme caution.

The simplest, most direct deals are usually the best deals.  Want to buy a shotgun?  They why are you shopping for toasters?   Don't let "twofers" or discounts, or coupons, or BoGos or whatever distract you from the fact you are getting fucked in the price department.
Oh sure, they promise you a freebie down the road, just remember that actually getting that freebie is nearly impossible to do.

We had these miles because we were "legacy" customers from USAir when American Airlines acquired/merged with it.   The last time I flew American was back in the 2000's, when they skidded a 737 down the runway at Washington Reagan National Airport (the only airport named after two Presidents!) in a severe thunderstorm, placing all of our lives at risk.

We then sat on the tarmac for over two hours, because the union man with the little flashlights wouldn't guide the plane in due to the storm.   Other planes arrived and disembarked passengers.  We sat there, ten feet from the gate, because of union rules.   The pilots couldn't drive that last ten feet without a union flashlight guy leading the way.  So two hours in an airplane with no A/C, no drinks, nothing to do, but sit and let your legs cramp up.

I vowed then never to fly American again.   Quite frankly, I can see no reason why I should change my mind at this point.  No wonder some rate it as the second-worst airline in the country!  What a shame  the name "American" is attached to such a third-rate, third-world operation.

Or was it?  Is even using these miles just asking for trouble?   I think the answer is yes.

UPDATE:  This site has "tips" on how to redeem miles.  Some airlines let you redeem miles for merchandise, but it is rarely a good deal.   Other sites have less helpful advice, but illustrate how fees (and fuel surcharges!) can make a "free" flight cost $50 to $100 or more.

AIRLINE MILES SUCK!   But then again, so does flying.  My next trip to Europe will be by ship!
Newer Post Older Post Home