The Do-It-Yourself Movement of the 1970's - How It Failed 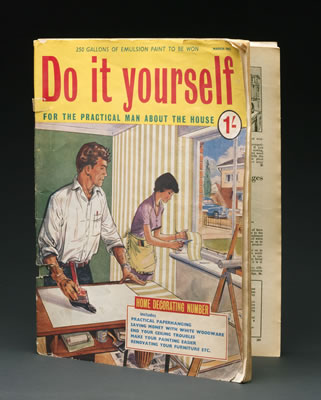 Should you do it yourself?  Of course, but maybe not the big projects in your life!


I wrote before about the Do-It-Yourself movement and why it often isn't a good idea to do things yourself.  Most of us have half-assed carpentry and plumbing skills, so if we fix things on our own, they tend to look half-assed and may create more problems than they solve.

I find as I get older, I am less and less willing to "do it myself" mostly because new stuff is so cheap and my skills are aging.  For example, I installed a new split-system air conditioning system in our garage, which is also our laundry room.  It came out OK, but it could have been a disaster.  I bought a vacuum pump and manifold gauges and pumped down the system and charged it and voila - it actually worked.

But I was nervous doing this as the last time I used a set of manifold gauges was at Carrier in 1985, over thirty years ago.   Today, we have technologies and even refrigerants that didn't exist back then and what I didn't know about new refrigerants was basically everything.

But at least I had some professional experience at this, albeit out-of-date.

What is do-it-yourself movement and how did it get started and why, for the most part it is a bad idea.   And why are people not doing for themselves the basic things in life we used to do?  These are all good questions!

The "Arts and Crafts" movement of the late 1800's and early 1900's could be considered the founding of this movement.   People were turning away from machine-made and factory-made things and wanting to "go back" to the times when "America was Great" (sound familiar?) and people did things for themselves.

Oddly enough, they celebrated this concept by buying things from factories that were "Arts and Crafts" style, and then furnishing their homes in this style of self-made goods.   Few people hewed furniture out of wood from scratch.

But the idea took off, and of course, for many folks, it never left - making things yourself was always the way things were done in rural America, as the cost of factory-made goods was considered too high.

In postwar America, however, factories were running full-tilt, and people were working hard in the 1950's boom.   And buying brand-new shiny factory-made stuff was the name of the game.   Few people wanted home-spun things in their homes, even if Dad had a hobby woodshop in his garage.   But Mom did make things at home.  She cleaned and cooked and baked pies and sewed dresses.   Dad mowed the lawn on weekends and "did chores around the house".   Simple things were done at home, complex things were often left to professionals, who were reasonably priced.

In the 1970's this started to change.  Stag-flation meant that wages were skyrocketing and labor was expensive.   Suddenly, trying to repair your own dishwasher made sense, as the local plumber wanted a pile of money just to drive out to your house.   Self-help books became a craze, and people started attempting projects that in the past, would have been left to experts.  And even manufacturers got in on the craze, offering products that the consumer could "service themselves".

For example, in my Mother's 1973 Vega Owners Manual, they posited that the new Vega was designed with "easy consumer service" in mind.  It wasn't actually true - the car was no easier or harder to service than other cars.  However, the "do it yourself" movement was in full-swing by then, and possibly this was a response to Volkswagen "Bug" owners who lauded their cars as being "easy to service" which was a good thing, as they often needed it.

Of course, one of the few things you could "do yourself" was change your own oil, a messy and time-consuming job that the local mechanic would charge you for.   Today, we have legions of low-cost oil-change places that charge often less what a "shadetree mechanic" would pay just for materials.   It often makes no sense to "do it yourself" anymore with regard to oil changes, yet many do just that.

This Old House went on the air in the late 1970's and touted the idea of self-home-improvement, at least initially.  Norm and Steve backed away from this "sweat equity" concept, perhaps after a few-too-many half-assed tile countertops (remember those?) were installed by homeowners without proper grouting or sealing.  But the show promoted the idea that you could install your own roof, your own bathroom, or remodel your own kitchen.   And while it is possible for some folks to do these jobs, not everyone should.

The Craft Beer Movement actually started in the 1970's as part of this craze.  As I noted before, many pioneer home-brewers got started back then, even if today's hipsters think they discovered the craze.   Again, the idea of having a lot of exploding bottles in your closet or cellar seemed like a good idea at the time.   And yes, some folks went on to found micro-breweries and ended up selling out to the big breweries and made a lot of money.   A lot more bought half-assed "home brewing kits" that ended up being sold at a garage sale a year later.

This also coincided with the Back to the Earth Movement of the 1960's and early 1970's.  We would all go back to living on the land, fending for ourselves, in a quasi-feral fashion.  Again, like the Arts and Crafts movement, it was a way of getting in touch with basic things in life, after feeling detached in a society where most people consumer machine-made products, including machine-made food. Of course, living in an unheated barn got old real fast, and many folks dropped out of this movement - as most people do, when it comes to movements - but kept vague notions of being organic or holistic or "natural" in their minds - only to be later exploited by marketers, who slapped labels like "natural" on unnatural things.

To some extent, this Do-It-Yourself movement was a good thing.  So why do I say it failed?   Well, simply because today, people are less capable of doing for themselves than ever before.  Most folks have no idea how to fix their own computers, much less smart phones.  Their cars are a mystery to them, even as they neglect and abuse them.   So much of our world today is sealed "black boxes" that you either have to throw away, or take it to the "genius bar" to try to recover your data.

But it is worse than even that.  Today we are willing to take on projects that require the skills of craftsmen, but are unwilling to do low-skill jobs like cleaning the house, mowing the lawn, or even preparing our own meals.

Mom and Dad decide to re-tile the bathroom - a daunting job even for a skilled tile man.   They attempt this, but at the same time Consuela their maid, is doing their laundry for them, washing their dishes, and vacuum their floors - all jobs Mom and Dad can do but would rather not do because they are "boring" and tedious low-skill labor.  And I know this as I remodeled my kitchen and bath while my maid did my laundry.

At the same time, of course, the yard man is mowing the lawn.   And when we're hungry, why bother cooking?  Just go out for some fast food, or have "takeaway" to bring home, or better yet, just have them deliver the food, taking away even that pesky "driving" stuff you have to do.  Then you can sit down and watch a home improvement show while eating fast-food.

We are all capable of performing these menial tasks, but choose not to because we deem them to be tedious, boring, repetitive, and dull.  So we farm out tasks we are clearly capable of doing in favor of taking on technically difficult jobs that require specialized skills because a TeeVee show said we could do this.

It you want to "save money" by "doing it yourself" think about the jobs you are currently farming out to others, that you are already clearly capable of doing.   If you are sending out clothes to the cleaners that could be washed and ironed yourself, ask yourself why you are paying someone else to do this.   If you are hiring a maid and a lawn guy and you can do these jobs yourself, ask yourself why.  If you are using restaurants as your kitchen, ask yourself - if you really want to save money by "doing it yourself" - why you aren't even taking on this simple task.

Because that is irony right there - the upscale couple remodels their own kitchen and then uses it for nothing more than re-heating restaurant meals.   What's the point of that?  Oh, right, status - the real reason people put in "look at me!" kitchens.

Now, let me anticipate the snotty response I will get from some yahoo out there.  "Well," they will say, "I can afford to hire a gardener and a maid!"   And if that is really true, then what the heck are you doing reading this blog?  The point is, it is idiotic, in my mind, to take on "do it yourself" projects if you are already hiring out half of the basic labor in your life.   The money saved by mowing your own lawn, doing your own dishes, washing your own clothes, vacuuming your own house, and so on and so forth, could pay for a professional tile person to do your bathroom or whatever.

Yet, we do the opposite, and like I said, in retrospect, I found myself doing just that when I was younger.