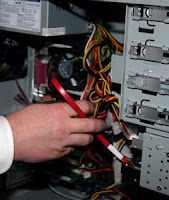 To begin with, "fixing" it is not worthwhile, if it is more than a few years old. Newer, faster, and better computers can be had for a few hundred dollars - not a lot of money.

So what do you do with an older computer?

Well, if the monitor still works, and you are really, really cheap, you can buy a newer "e-Machine" or the like, without a monitor, for a couple hundred bucks. Back in business and you've saved yourself the price of a monitor. By the way, that is a cheap way to buy a computer. Older monitors are usually given away for free or sold for $5. If you don't mind using an old CRT, you can knock $100 or more off the price of a new computer.

But of course, if you are like me, you want the new huge flat panel displays (I use dual 24" and look forward to getting larger ones some day).

But suppose you already bought a computer? What do do with the old one? As I noted before, older monitors are nearly worthless - in many cases you can't even give them away. You might try getting $5 for it at a garage sale or on Craigslist. Good luck with that. Properly disposing of old monitors and TV's is also a problem - many places refuse to accept them. One friend of mine put his in a garbage bag, wrapped with trash. Trash men hate that, as the CRT can implode when crushed in the truck or crusher, and set shards through the garbage bag.

Similarly, old mice and keyboards are nearly worthless. You might get a dollar for each at a garage sale. They are not costly new, so they are nearly worthless used. You might think about saving them as "spares" (for when you spill coffee on your keyboard or break your mouse). But after a few years, you may find these stacking up in your home.

The guts of a computer can be harvested and re-used to some extent. For example, in my old Dell, I took out the memory, the hard drive, and the CD-ROM. Since I have another computer on my network that is nearly identical, I was able to add the memory to that computer (doubling memory capacity) and add the hard drive (using a salvaged ribbon cable from the old computer) and even add a second CD-ROM drive (what for, I don' t know - copying CDs perhaps?).

Granted, usually a hard drive crash is what kills off a computer. But this one still worked, and installing it on another computer is a good way of doubling drive space as well as being able to access your old "lost" files on a new machine.

The gutted case from the old computer is nearly worthless. The case itself is worth pennies, if that, and an obsolete motherboard, particularly one that is blown out, is worth nothing. The power supply might be worth a buck to a hobbyist, but that's about it.

Note that when you open up your computer case, you may find it filled with dust, motes, and cob-web like crap. This stuff can cause a computer to overheat, often frying the processor or other components. It is worthwhile to open up a computer now and then (after powering it down and unplugging it from the wall) and carefully vacuuming it out or blowing the dust out.

Put the unit outside, and using your vacuum cleaner in "blow"mode, blow the dust off everything, including the cooling fans and grills. The plenum over the processor heat sink may hinge off for cleaning. Expensive compressed air cans are nice, but not really necessary.

So you've salvaged what you can. You've sold a few parts on Craigslist. What do you do with the rest? That's a good question, and one which I am researching now, as myself and several of my neighbors have old computers, televisions, and other appliances (some working, some not) that we can't dispose of, give away, or sell.
Newer Post Older Post Home