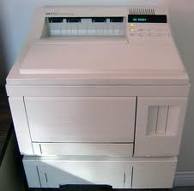 Hewlett Packard's Printers peaked with the introduction of the HP Laserjet 4 Plus.  Like Diesel engines, these printers ran forever.  I bought two, over fifteen years ago.  One is still running!  HP no longer makes products this cheap to own and use - or this reliable.
What happened to HP?  The company that once was the go-to name for printers, instrumentation, and computers, is struggling to make its way back to the top of its game.

To any Engineer or Technician, the HP name was synonymous with quality instrumentation, not printers or computers.  All that came later. But by the early 1990's the HP Laserjet was the de-facto standard in office computing.  They sold a lot of them, and many are still around.  Like I said, they were like Diesel engines - they even smelled like them.

The problem with the Laserjet 4, was that anyone could make cartridges for it - or refill them.  This was not a problem for the customers, of course.  But for HP, it meant less profits than they'd like.  Newer printers have much smaller cartridges and are set up so that they are harder to refill - or have proprietary "chips" embedded into them - whose sole purpose is to prevent 3rd parties from making compatible cartridges without infringing a Patent.

They moved to a "screw the customer" model of business - where the printers were basically given away, with the idea they'd make up on the back end with cartridge sales.  This increased the cost per page to print, of course.  And consumers were not stupid - they figured out the costs pretty quickly.

HP merged with COMPAQ and sells overheating laptops and computers.  Go on Woot! and you will see "refurbished" HP laptops and computers for sale all the time.  Supposedly the NVIDIA chip overheats and blows up, usually right out of warranty (I had this happen in my Gateway desktop - fortunately for me, a new card was $39 on eBay and was easy to replace on that machine).  But their reputation for quality was affected.

Compounding all of this was the ill-advised choice of Carly Fiorina as President of the company.  She ran the place into the ground, basically.  Rather than concentrate on running the business, she rented out Dodger Stadium and had all the employees take a day off so they could worship her in person.

They finally fired her.  But she apparently likes the spotlight, as now she is running for Governor of California or possibly the Senate.  She is characterizing her tenure at HP as setting the stage for its recovery.  I guess this like George Bush saying that he set the stage for our economic recovery.  In a perverse way, it makes sense - you can't have a recovery until you've tanked the company or country, right?

But the damage is done, in my opinion.  HP was once the gold standard in instrumentation and printers, and to some extent, in computers.  Today, I am hesitant to buy anything with the HP label.  I am hauling my 3-year-old HP color printer to the dump tomorrow.  The plastic flange where the cartridge attaches broke off the first day I had it.  Now it doesn't print at all.  3 years, and it's trash.

I also bought one of those HP "all in one" printer/fax/scanners, and it burns through cartridges like mad.  The cartridges also dry up quickly and print out in stripes.  As a realistic printer solution, it it lacking.  Too costly to use regularly, and if used infrequently, the cartridges dry up.  In short, it is really non-functional.

I bought it mostly for the scanner, but it is not as nice a scanner as my Xerox Documate 510, which is pretty old, let me tell you!  That scanner chugs along and works well.  I'm keeping that and dumping my much newer HP all-in-one.

I also bought a newer HP lasterjet, but the cartridge is tiny and needs to be replaced often.  And it didn't have the option of an extra paper tray, so I am always loading it with paper.  I will probably keep this, in case the old HP 4+ eventually dies.  But the real deal is, I don't print anymore.  With dual 24" monitors, I display everything on the screen now.  Paper is dead - printing will go the way of the LP record and the VHS tape very shortly - leaving the printer and photocopier markets hurting in a big way.

What will HP sell then?  Overheating laptops as space heaters?  Maybe they can put them in those Amish enclosures and sell them in the back pages of Smithsonian.

Meanwhile my 1995 HP 4+ continues to churn out pages, without complaint, and takes a whole ream of paper at a time.  I replace the printer cartridge maybe once or twice a year, if that.  Something is definitely wrong with a company when their decade-old products are better than their new ones - particularly in the tech sector!

You'll take my 15-year-old Laserjet 4+ away from me when you pry it from my cold, dead hands!