Weight and Finances - is there a connection? 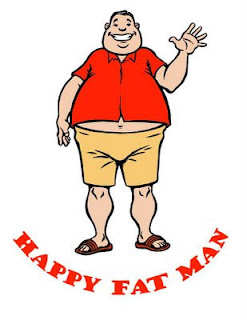 How you feel affects how you think.  How you think affects your finances.
One aspect of this blog that is different than other financial blogs is that I harp on mental hygiene a lot.  Financial independence and fiscal responsibility are easy if your mind is in the right place.  On the other hand, if you are depressed, it is hard to maintain and control your spending and finances.

Thus, you have to take a holistic approach to financial matters.  Balancing your checkbook, paying down credit card debt, being debt-free, and having money in the bank are not something you can do in isolation from the other aspects of your life.  Rather, they are closely tied in with your physical and mental health.

I have also noted, time and again, how paying off credit card debt and losing weight are very similar processes.  Credit Card debt and being overweight don't happen overnight - they are insidious processes that occur over years and years, until you wake up one day and "discover" that you are $10,000 in debt and 50 pounds overweight.  And losing weight and paying off that debt require a lot of discipline and self-control - and changing your way of thinking about life.  If you try to live like "everyone else" in America, you will end up fat and in debt - because "everyone else" in America is just that.

But beyond that, is there a more visceral connection between obesity and spending?  I think there is.  The mind controls your actions - that seems obvious, of course - and your mind controls your eating habits - consciously or subconsciously.  You may find yourself "grazing" or wolfing food and not realize it.  But your mind realizes it, even if it tries to conceal this from the conscious part.

Why would your brain make you over-eat anyway?  Again, from a Darwinian perspective, it is probably a survival skill.  Most of the history of mankind has been a struggle to obtain sufficient calories on a daily basis.  Calories, in the wild, can be hard to come by, and when there is food in plenty, it pays to consume it.  Before refrigeration, canning, salting, and other food preservation techniques, the only way to "store" food was to keep it "on the hoof" as livestock, or to eat it and store it as body fat.

Cavemen and women who said "no thanks, I'm trying to watch my waistline" when presented with a feast, were most likely the ones that starved to death the next month during a famine.  The fatties who gorged themselves on Mastodon when they could, survived.  So over-eating is, in a way, programmed into our brains.

And yes, over-eating will kill you - eventually.  It will shorten your life to as little as 40 years.  But again, from a Darwinian perspective, Nature doesn't care what happens to you, once you are beyond the reproductive age.  You are just a worn-out shell at that point, and so long as a next generation can survive, it doesn't matter if you have coronary artery disease, gout, diverticulitis, diabetes, or cancer.

Until the 20th Century, that was pretty much the history of mankind.  Life expectancy was not long.  When Social Security was created during the depression, no one expected very many people to collect at age 65 - few lived that long.  Today, the average lifespan in the US is close to 78 - The odds of retiring exceed the odds of dying early.

But in the late 20th Century, Americans started getting heavier and heavier.  It has been a steady trend for several decades now - and getting worse.  Life expectancy could actually drop for our generation, as heart disease and type II diabetes take out an entire generation.  And in terms of wealth and debt, our generation is less wealthy than the previous - and further in debt.  Is there some sort of connection between being overweight and over-spending?

Yes, and I believe it is mental in nature.  Just as your brain is sneaky and gets you to over-eat while shielding this data from your conscious, your brain also gets you to over-spend while similarly shielding this data from you.  Both activities are related to survival, in terms of "acquisition" or perhaps what we might call the hunter-gatherer instinct.

Part of our psyche likes to acquire things - to hunt and gather nuts and acorns and other valuable things, to tide us over for the winter.  Or perhaps to bring down the stag or Mastodon, to feast.  Acquiring things is a positive trait for a caveman.  The more they hunt and gather, the wealthier they are.  And back in caveman days, there was no Mastercard or VISA.  If you wanted acorns or nuts, you just took them.

And the analogy is apt - many serial shoppers talk about their experiences in terms of the hunter/gatherer.  They seek out bargains, and they drag their kill home - in designer shopping bags.

And of course, it goes without saying that a lot of credit card debt is acquired not from shopping, but from dining out in restaurants.  Americans love to eat out, usually at horrible chain restaurants that serve high-calorie meals (1000 to 1500 calorie entrees and higher).  The connection between being overweight and in debt is quite direct there.

Again, subtle brain activity might cause you to do both.  And being overweight may alter your brain function to make you consume more.  Is this possible?  I think so.

When I was in the last year of undergraduate work (a decade-long process for me, but that's another story) I took a year off from work and spent my time studying or in the gym.  I rode my bicycle 20 miles to school, and lost a considerable amount of weight.  I was down to 180 pounds at one point.  And the funny thing was, the more weight I lost, the easier it was to lose more.  I felt that my thinking was different once I became "thin".  My desire for more food diminished, and moreover, I started spending differently as well.

And the oddest thing was, once I lost weight, I looked at disdain at the "fatties" gorging on bad food.  "I'll never live like that again!" I thought, but of course, in the intervening 25 years, the weight crept back up on me (I lost 35 pounds this year, I am pleased to report, however).

Perhaps being overweight and overeating sends chemical signals to the brain - "There is plenty, enjoy, engorge, eat" and thus you tend to believe (rightly or wrongly) that you are "wealthy" and thus are more likely to spend money.

When you are thin, however, the brain might be getting chemical signals that "this is a time of want - conserve!" and your brain thinks, subconsciously, that you should conserve - spend less, save more, be more fiscally responsible.

And if you think about it, our popular culture - going back centuries - has always depicted the "miser" as a thin, bony man, who is mean-spirited and pinches a penny.  On the other hand, the fat, jolly man is depicted as happy and a free-spender.   Perhaps these ancient cultural cues reflect our brain chemistry.

As I alluded to earlier, this January, we started on a program of portion control and exercise, in an attempt to lose weight.  I found I had ballooned to 265 pounds over the years and was becoming alarmed at my rapidly declining health and well-being.  We have managed to lose 35 pounds and need to lose more, of course.  But it is a start.

At the same time we have been losing weight, though, our program of fiscal weight loss has accelerated dramatically.  For some reason, this year, I view things differently than last year.  I am cutting out some big expense items from my fiscal "diet" that a year ago seemed to be necessities.  Not only am I not missing these things, I wonder why I kept them around.

And in a way, it is like how my brain now views food.  While a year ago, I would think nothing of wolfing down a plate of cheesy nachos, today I look at such foods with revulsion - or at least with the realization that they represent very poor diet choice.

Of course, with weight loss, like fiscal management, it is possible to go too far - to become Ebenezer Scrooge or Kate Moss.  But frankly, given the way most Americans live in the USA - 50-100 pounds overweight and thousands of dollars in perpetual debt, the risk of "going overboard" is the least of our worries.
Newer Post Older Post Home