The Myth of the Family Homestead 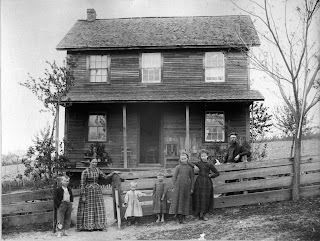 The "family homestead" today is largely a myth based on our collective past.

One interesting aspect of the politics surrounding the foreclosure "crisis" is the rhetoric bandied about by politicians and activist groups.  As I have noted before, in recent years, the "American Dream" is no longer about making it on your own in society, based on your merits, but on owning granite counter-tops and stainless steel appliances - at least according to the politicians.

Politicians and issue groups are using the foreclosure crisis to make political hay.  When you see people "protesting" all with identically and neatly printed signs, you know it is an astro-turf campaign, probably from the Unions.

The mythology of the family homestead is partly to blame for this.  The mythology is documented in our history, our movies, and books, such as the graphic novella, Fun with Dick and Jane.

Much of this mythology stems from the transition of our country from an agrarian society to an industrial one.  "Over the river and through the woods," we sang, "To Grandmother's house we go!"  And Grandma and Grandpa were likely to live on a farm, gathering the family together for a turkey-carving at Thanksgiving, just as Normal Rockwell showed us.  According to the myth, we all grew up in Smallville, on the farm, before moving to the big city and assuming our identity as Clark Kent.

While this myth of the "family homestead" may still be true for a small minority of Americans, and may have been true for a number of Americans in the past, today it is hardly the norm for any of us in a post-industrial age.

Today, the family homestead is most likely to be a suburban tract home, and chances are, the average family may live in it for 10 years or so, before moving to a bigger home, or relocating to another city, due to job and career changes.  Divorce, too, has dramatically altered this landscape, as more than half of all marriages end in divorce, and selling off the family home is often a step in this process.

For people today, there is little sentiment attached to a home that you have lived in for 5-10 years.  This is not the house you gave birth to your children in, and not the house your parents and grandparents owned.  It is just a place to live.

And yet, during our foreclosure crisis, we hear cries of "let people stay in their homes!" as if they were the Joads being forced off the farm in 1930.

Sentiment can really get in the way sometimes.  While it is well and fine to have sentimental feelings about old photos and keepsakes, these take up little space in your life and are portable.  Being sentimental about a car, a boat, a motorcycle, or worst - a house - can clog up your life and put you in a position of stasis, preventing you from succeeding more fully.

For example, on NPR the other day, there was an article about how bad things are in Michigan, and they interviewed a lady from Flint, Michigan, who wanted to "stay in her home" but lamented that job situation was dire.

Here's a hint:  The job situation in Flint, Michigan has been "dire" for two decades now, if not more.   Michael Moore did a documentary about it in 1989 (Roger and Me) and not much has changed.  If you live in Flint, Michigan and are unemployed, don't bother wasting your time looking for a job - just LEAVE and move somewhere where there are jobs.  As Moore illustrated in his documentary, the automakers are closing the plants for good - and the local government is squandering what little it has left in socialist fantasies.

And yet, in this industrial age, many folks refuse to relocate, based on sentimentality about a home that is hardly the family homestead.  It is short-sighted and foolish, as eventually, economic pressures will be such that they WILL have to relocate, only at a much more disadvantaged economic status.

In my personal life, I have followed this plan.  Right now, I see the economy staying flat for the next 5-10 years.  My personal business is doing well, but not growing.  Income is flat, if not down.  I have decided to sell my New York home to reduce my personal overhead.  Rather than let sentimentality get in the way - and ride my life's savings all the way down to zero - I am selling when I can, getting a reasonable (not great) price, and moving on.

Is this hard to do?  Yes.  We put a lot of effort into this house and it has a lot of good memories associated with it.  But it is just a material thing, and material things are far less important than spiritual ones.  Living in financial stress, just so you can own "things" makes no sense at all.

The cry of "let people stay in their homes!" makes no sense if they are over-mortgaged and will never pay off the debt - and the home will never be worth what they owe.  It makes even less sense if there are no jobs in the area and never will be.

When housing prices drop, which they have and will continue to do in places like Flint, Michigan, eventually, the cost of living will drop - which means workers can live for less money.  This, in turn, may attract jobs back to the area, provided the local government doesn't tax everyone to death in the interim with ill-advised programs, such as Flint's laughable attempt to attract the tourist trade.

Karl Marx one stated that when workers are tied to the land, they cannot become industrial workers and wage earners.  In his era, he was referring to serfs, or share-croppers, who were tied to land that was owned by the land-owning ruling class.  But today, we see a similar effect, as most of us are in debt to banks (the new ruling class) and are tied to onerous mortgage payments.

I am no big fan of Karl Marx (or George Bush, for that matter).  But even a stopped clock is right - twice a day.  Marx was right that being tied to the land is not advantageous for the worker, while being mobile is.  George Bush was right in that humane immigration reform was the answer to our immigration crisis (but was shouted down by his own party).  Both were pretty much wrong about everything else, however.

The difference between then and now is that the serfs had little choice in their plight.  There were no other opportunities.  And they were likely born into serfdom.  People today willingly sell themselves into serfdom for the sake of granite counter-tops, a flat-screen TeeVee and Lexus.

"Staying in your home" out of pride is utter nonsense, once economic conditions change and you no longer can afford it, or the job market has moved out of State.  Eventually economic conditions will get so bad you will be forced to move.  Why wait for that?  You are better off making a move at a time and place of your choosing, than to be forced to do so by circumstance.
Newer Post Older Post Home