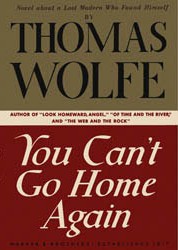 Living in the Past is never very constructive...


One aspect of Facebook and other social networking sites is that they provide you with the opportunity to "catch up" with old friends from the past, your high school buddies, and perhaps even your high school sweetheart.

This appears to be such a common need for so many people, that a small industry has sprung up around it.  Websites such as Classmates hype the idea that you can finally catch up with that cheerleader you were too nervous to ask to the Prom and finally score with her.  But the reality is, she's 50 now, fat as a cow, and has four kids - and even grandkids, and you wouldn't sleep with her on a dare.

But that is the fantasy sold by many of these sites - that she is still young and nubile and oh-by-the-way, wants you desperately.  And some of them, like Classmates, make you pay a fee to find out that your fantasy is past its sell-by date.  Save your money.

But beyond that, is living in the past really healthy?  I think not.  There is a certain poignancy about reading about old friends online or hearing about what happened to an old pal, or who died, who got married, who got divorced - whatever.  And you may meet up with old friends online, have a few awkward e-mails with them, and then realize that either (a) you were totally different people all along, or (b) in 20-30 years, people change - a LOT.

Actually (a) is usually the case.  One reason you may tend to fall out of touch with people from your past is that you didn't have a lot in common with them.  You tend to stay in touch with those you do.  But friendships based on circumstance (you shared a dorm room, or a frat house) are not really strong friendships based on common interests, outlooks on life, or even love.  They may tend to be more of the superficial situational friendships that many people like to have, to drown out the noise in their lives.

And you see the latter a lot on social networking sites.  Some people, particularly younger people, have hundreds of "friends" on Facebook, which of course, is literally impossible to do in real life.  You cannot sustain a close friendship with 500 people, even if you can "friend" them on Facebook.

And the reason why kids do this - have hundreds of Facebook friends - is status.  After all, you don't want everyone in High School to think you're unpopular, right?  Because being popular is the most important thing in life!  (Note to teenagers, this is what sarcasm looks like).  When you get older, you care less and less what other people think, and being "popular" is something only high-school kids obsess about.

As we get older, I think we tend to get more picky about who we keep around as friends.  Not that we are snobby or anything.  As I noted in my That's What Friends Are For posting, we start to realize that some friends can be clingy, needy, and a real burden.  Other friends may end up being drug addicts, alcoholics, or criminals.  You are better off, in many cases, distancing yourself from such destructive and toxic relationships.

Other friendships drop away due to geographical considerations.  It is hard to maintain a friendship when you are a thousand miles away.  And as time passes, our life-experiences do change us.  The neural network that is our brain is constantly reprogramming its weighting factors in response to the stimuli that is our environment.

So yes, we do change, and reason (b) given above is also relevant.  Once you've experienced 20 years of living since you last saw someone, both you and they are different people.  Radically different.  And the longer the time period that elapses since you last saw them, the more different you will become.  Because your life experiences literally shape your mind, each stimulus input to your brain altering the weighting factors on your neural network nodes, until your brain adapts to the environment it is in.  20 years after high school, you are different, and that cheerleader is different as well.

So the idea that you can "hook up" with old friends from school and plug in just where you left off, is a fantasy.  You both have changed.  And people who try this - at class reunions and the like - all report that it generally is creepy and weird.  And after a night of dancing and drinking and partying with the old crew, with good-nights laced with "We all have to keep in touch!" - nothing happens.

Despite the best of intentions, most people don't keep in touch or make their old high school friends part of their new social circle.  I suppose it may happen occasionally.  It happens in the movies a lot.  But not in the real world.  Sure the few people who still live in your home town keep in touch with each other.  But that's only because they never got out of touch with each other.  Once you fly back to the coast, you'll realize that you really are NOT cut out to be "BFF" with Suzie from Home Ec class.

You have to let go of the past - and live in the present.  While it is fun sometimes to reminisce and think about the old days, overdoing it is a sure recipe for depression.  Looking through old photo albums may bring back happy memories, but also underscore missed opportunities.  And of course, living in the past like that reinforces one's own sense of mortality.  Look how much of your life has passed you by already!  Death is mere moments away at this point....

I have seen old friends online.  We chat a bit and say "let's get together sometime" and never do.  And that's probably a good thing, because it would just be awkward and uncomfortable - like having lunch with a stranger.  Nothing in common, nothing to talk about.  Just an awkward lunch.  So I don't force the issue.  Let memories sleep in peace.

What is interesting to see is how some people do live in the past.  Facebook provides an interesting window into people's lives, unless of course, they are spoilsports and restrict access to their pages to "friends only" (what on earth are they trying to hide?).  Some folks I knew from back home are still living... back home.  And they are still seeing the same circle of friends that I knew back when I was in high school.  Imagine that, over 30 years later and they haven't budged an inch.

Worse yet, many have tons of pictures on their Facebook pages from "back in the day" - reliving events and parties, and get-togethers circa 1978.  What they are doing in the present, apparently, is of less interest to them.

Perhaps I am not sentimental.  Perhaps my mind is wired differently - or my long-term memory is shot.  I look back to 1978 and don't remember a lot of happy times.  The economy was in the tank, we had hostages in Iran, my Dad was losing his job, my Mother was drinking herself to death.  On a national as well as personal level, it was not a happy time.  And while I recognize some of the names of people from my old school, for the life of me, I can't really remember one from the other, and other than a few close friends, can't remember much about any of them at all.  Perhaps that is the effect of all the marijuana we smoked back then.

At first, like most people, I was intrigued by this aspect of Facebook - the ability to spelunk through the database and read up on people's lives.  Once you find one friend online, it links you to another, and another, and so on.  In a way, it is pretty creepy, like looking in someone's kitchen window while they are eating breakfast.

And the really depressing thing is, nearly everyone's Facebook page looks the same.  We'd all like to think we are daring originals out there, but in reality, we all tend to gravitate toward the same thing and same trends.  Most folks' Facebook pages are a bland collection of favorite bands, inane quotes, photos of pets and children and vacations, and truncated comments from friends - my page included.  Why anyone would obsess about keeping this dreck private is beyond me.

Move on.  Live in the present!  There is no profit in the past - other than for the folks at Classmates, Facebook, reunion.com and the like.

Note: The book shown above is Thomas Wolf's You Can't Go Home Again, the sequel to his Look Homeward Angel.  In his first book, he did try to go home again, writing about the corrupt and silly lives of the people in his hometown of Asheville, North Carolina.  Needless to say, the natives weren't pleased with the unflattering picture he painted of them.   Hence the title of the second book.

I have a fourth blog, Small Town Stories, which I intended to write some of the more odder things that happened to me growing up.  I have not yet published any of those stories yet.  I am not sure I want to or need to.  What profit would there be in it?  It would just be maudlin and depressing.

UPDATE:  I have long since deleted my Facebook page.  There was no "there" there,and I got out!