Things to ask yourself when throwing things away (or selling them) 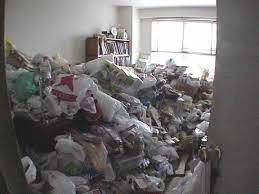 Getting rid of  "stuff" is hard to do.  Your own mind may try to deceive you into keeping junk!
Selling the vacation home,  there is a lot of stuff we don't need.  And a lot more we are finding that we are scratching our head over.  Why did we save this?  What on earth were we thinking?
It is a good idea to go through your house on occasion and clean out the junk.  Have a yard sale (or garage sale, tag sale, jumble, or whatever they call it where you live).  Sell stuff.  Donate stuff to charity.  Throw things away.  The main point is to get rid of clutter.
We all make the same lame-ass excuses to keep things. If you are going through things, be ruthless and if you find yourself saying the following things, it is a good tipoff the item should be sold or discarded.  All of the following are the excuses used by HOARDERS to clog up their homes with GARBAGE.  To avoid becoming a hoarder, you need to be pro-active and stop yourself from doing these sorts of things.  Stop buying junk!  Get rid of the junk you have!  And don't take things because they were free!
Anyway, here is the list:

If you find yourself using ANY of these justifications, then chances are, you need to get rid whatever it is that is in your hands at the time you are saying any of the above.
The long and the short of it is, if you are not using something, and have no bona fide intent to use something in the next 6-12 months, there is no point in hanging onto it  for any of the reasons given above.  Sell it, donate it, toss it!
Keepsakes and treasures that spend years in a darkened closet, viewed only briefly when you move, are never going to be used.
Junk that is too ugly to put out, but "too valuable" to throw away, should be sold.  If there are no buyers, then it is just junk.
And yea, Grandma owned that ugly vase.  It survived because she shoved it in a closet 70 years ago - thinking it was too ugly then.  Grandma owned a lot of crap, but that doesn't justify keeping all of it.
Putting things in moldy basements, overheated attics, or darkened closets is not "owning" things - just letting them go to waste.  Better to liquidate while they still have some value, than to let them rot in obscurity.
Keeping things because they are "collectible" when  you are not a collector is just foolish.  If you are not a collector of something, then you really have no idea what the items are worth in the first place. Amateurs should not collect coins or stamps - chances are, in both cases, they will end up with worthless collections.
And when something is "partially" broken, chances are, it is shot.  Saying a convertible top on a car is "mostly good" because there is only one hole in it, misses the point. Once holed, it needs to be replaced, period.  Similarly, clothes with holes in them, or appliances or other items with broken parts are likely to be SHOT, as the cost of repairing them (and the non-availability of parts) makes it a non-starter.  So your "slightly" broken blender is just trash, not "worth something".  Let it go!
Living with less is less stress.  Once you realize how you've cluttered up your life with garbage, you can start to thin things out.  And you needn't be a full-blown hoarder to have a life clogged with junk.  Garages, basements, closets, attics, and storage lockers  can "hide" the hoarding disorder malady from public view.
Like the closet alcoholic, the closet hoarder can hide his affliction - often literally in the closet.
Mental hygiene takes effort.  And oftentimes, a dumpster.
Newer Post Older Post Home