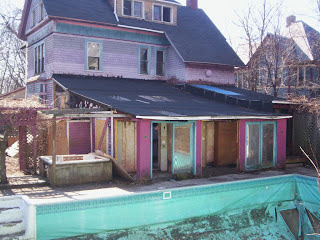 Poorly planned, poorly constructed illegal additions are the hallmark of what I call Serial Obsessive Construction Disorder.
An interesting but little-known disorder is what I call Serial Obsessive Construction Disorder - a malady that affects mostly men, causing them to build, tear down, and rebuild structures, over and over again, without ever finishing them. I don't think this is an officially recognized disorder, or if it is, what the official name for it is.  But it exists, let me tell you!
Serial Obsessive Construction Disorder (SOCD) is a name I have given to a behavioral pattern I have witnessed in a number of people, including friends and acquaintances.  In the worst cases, the victim spends all their free time "building" things, then tearing them down when they are 95% complete, and then rebuilding them.  It is tragic for the victim, their family, and their neighbors.
It is good business for Lowes and Home Depot, though.
There are a number of characteristics of this disorder, including:

1. Complete lack of blueprints or drawings, other than what is "up here in my head"
2.  No construction to code or using ordinary building techniques.
3.  No permitting, inspection, or other official authorization or inspection
4.  After years or even decades, the construction is never complete
5.  New projects are started before the old ones are finished.
6.  Building materials are often found objects, discarded items, or just junk, such as discarded windows and doors, pallet lumber, or other construction debris.
7.  The sufferer lacks the basic skills and tools to properly tackle such jobs.
8.  The sufferer often neglects basic maintenance in favor of wildly fantastic projects.

There are many ways this disorder manifests itself.  Here are three examples I know of, that illustrate the problem:

In one example, a middle-aged man spends years building a cabana down by the lake.  He constructs the first iteration from scrap lumber, found materials, and other items, including a broken-down travel trailer.  The neighbors, alarmed, call the zoning office, but realize there is little they can do to stop the SOCD sufferer.
Before the cabana is complete, he tears down most, but not all, of what he had built, leaving the debris in piles on his and his neighbor's properties.  More angry complaints to the zoning authorities ensue, with little effect.  A new cabana goes up in the place of  the old.  During the construction of this one, it morphs, like a child's Transformer toy, several times.  Walls become roofs, then fences, then floors.  Every week, it seems, a new wing is added and an old one demolished.
Five years later, the cabana is still unfinished and the last work is being sawed down in favor of a new plan.  At this stage, it is clear the "project" will never be completed.  The builder will eventually die and all this efforts will be bulldozed in a matter of minutes.

We saw this property while looking at vacation homes in West Virginia.  It was a sprawling house, on a lake, with porches, minarets, towers, balconies, staircases, and no fewer than 5 levels.  It started as a small camp, and then the owner decided to "add on" a bit.  He built a tower (very typical) and bedroom, which was almost to code, although awkwardly added.  But then a succession of poorly thought-out additions were added, including some using dirt as a foundation.  It was if it was built by a child, nailing together a tree-fort.
There were no fewer than six different types of siding, seven window styles, and a hodge-podge of architectural styles from Bauhaus to prairie, to colonial to faerie castle.  It was a nightmare!
By the time we saw the property, it was boarded up and the owner had died.  His widow was trying to sell it, but most of the decades of hard work was ready for the bulldozer and dumpster.  It was little more than a lot at that point.

The fixer upper likes to fix up his house.  But he never does the jobs properly or completes them.  His neighbors are throwing away a picture window, so chainsaw in hand, he decides to "install" it in his home.  And install it he does, although without any header above it and with 3-4" gaps at each side.   Cold air pours into the house, along with rain and insects.   The roof starts to sag where the structural supports were chainsawed off to fit the window.
But before he can finish this job, he has sawed another hole in the roof for a poorly-thought-out skylight.  The deck railing is disassembled so he can build a new one - but it is never built.  The list goes on and on.  Demolition for several projects is begun, parts bought at Lowes or Home Depot, but construction never commences, or if it does, it is never completed.  And the sufferer lacks both the proper tools and proper skills to complete the job.

These are just three examples of SOCD that I have seen - and I have seen a lot more.  Many SOCD sufferers are also hoarders, and there may be a connection.   Hoarding of discarded construction materials often leads to these types of projects.
What causes SOCD?  I think there are numerous causes.  Americans got on this "do it yourself and save!" binge back in the 1970's when prices skyrocketed and people were looking for ways to "save" on things, like home repairs.  But many self-done "improvement" projects add little to the value of a house, or in fact detract from it.
And in this regard, home-improvement shows continually sell the idea that you can fix up your house cheaply and quickly (in the time-frame of a 22-minute TV show).  People watch this and don't understand that something like tiling a floor is backbreaking work than can take days - and takes talent to do right, particularly the trim pieces near the edges.  The SOCD sufferer glues down a few tiles, then calls it quits and moves onto the next project.  In his mind, the tiling job is "99% done" when in fact is has hardly been started (finish work is more than half of any construction job).
Lowes and Home Depot and other "big box" home improvement stores sell the ideas of these projects to the everyman.  Years ago, such stores simply didn't exist - or if they did, they did not suggest the panoply of home improvements they push today.  Years ago, we were content with Formica counter tops, and if we wanted home improvements done, we hired a handyman to do them.
And the cost of labor being what it is today, people more and more are forced to "do it yourself" in many circumstances.  But the SOCD sufferer isn't doing basic repairs around his house, but rather very ill-conceived but elaborate projects that are totally unnecessary.  In fact, the typical SOCD sufferer will neglect simple maintenance (fixing a toilet) in favor of an overly elaborate and poorly planned project (adding a bathroom on top of the deck).
Whatever the cause, SOCD can be crippling to the victim and a tragedy for immediate family members.  It also annoys the snot out of the neighbors, as the SOCD sufferer's unfinished castle is an eyesore that brings down property values.  And eventually, the SOCD sufferer's house will fall down around them, as their projects have allowed water ingress and a whole host of other maladies to affect the structure of the home.
As with hoarding disorder, I think there are some things you can do to nip SOCD in the bud.  Avoid the temptation to start construction projects particularly when others are unfinished.  I find I have to squelch this tendency in my partner, who, upon seeing a display at Home Depot, is all set to load up the pickup truck with lumber to start a new project, while six others lie in various states of completion.  I finally put my foot down in that regard, and issued a "no projects" edict.
The various projects you can start and add to your home add no value and usually detract from it.  The best way to avoid this disorder is to not try to "improve" your home, but rather just maintain it as best you can.  If you desperately need a second bath or an updated kitchen, the best thing to do is sell your well-maintained home to someone else and then BUY the home you want with the features you want.  Trying to add-on, as I have noted before, is often not cost-effective. And even properly done "improvements" can over-improve a home, and their cost is not recoverable.
The secret, I think, is to get off the "home improvement" bandwagon, by spending less time watching home improvement shows, and limiting your visits to the "home improvement" store to buying repair materials for needed repairs.  Because, when all is said and done, you really can't "improve" a home very much if it is already in livable condition.  Home values are based more on location and condition than on the number of fru-fru additions and improvements you add.  And poorly done or unfinished projects detract from a home big time.
Just say NO to SOCD!
Newer Post Older Post Home