Why Foreclosures Continue To Rise 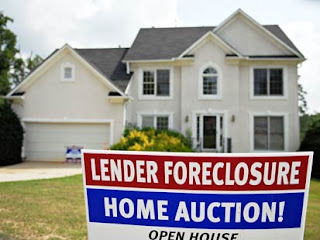 Even though the "worst" of the recession may be behind us, the foreclosure rate continues to rise.

A recent news story relates that the foreclosure rate is increasing as of late, which is alarming to many people, but is totally expected, if you think about it.

There are a number of reasons for this trend, and none of them are really alarming - or more alarming that what we are used to these days.

First, in many States, it can take a year or more for a bank to foreclose on a house.  Compounding this was efforts by legislators to appear to be the good guy (right around election time) by voting for measures to extend the foreclosure process, or to provide borrowers ways to "work out" loans.  So many of the homes now appearing on the foreclosure auction block are homes where the foreclosure process started nearly a year ago.

Second, as unemployment continues to maintain double-digit numbers, many folks losing their jobs are just now losing their homes.  When the recession hit, not everyone lost their job right away.  It may take a year or more for a company to be hit hard enough to have to lay off employees or close its doors.  As I noted in the Second Dip for the Recession posting, if history is any guide, we have a lot more bad news to swallow before we get good news.

So a lot of people are just now getting laid off, or were laid off a few months ago and are just now reaching the point where they can no longer afford over-mortgaged homes.

Another aspect of the problem is that a lot of homeowners are finally giving up, after trying to "hang on" to over-mortgaged homes for a year or more.  When the economy went bust, people weren't tossed out of their homes the next day.  Most had savings to pay the mortgage for a month or two - or a year or two.  Some still were employed, or found the money for the time being.  Some ill-advisedly tapped into their 401(k) plans to pay the mortgage.

The temptation to "dip into" 401(k) money when you are laid off is a deadly one.  Not only will you have to pay taxes PLUS the 10% penalty (causing you to dip in again) you are squandering what little retirement savings you have, in order to make interest payments on a mortgage.

Many folks attempted to do this to "hang on" to upside-down properties, convinced the market will "turn around" and they will make money on their mortgaged mini-mansion.

Hint:  It ain't gonna happen.  If history is any guide, appreciation in Real Estate will continue at 2-3% a year, if that, for the next 5-10 years, at the very least.

If you are 30% upside-down on your house, you've got a long wait - and a lot of interest payments to make.

And yet, I know a number of people who are "upside-down" on heavily over-mortgaged properties, with huge monthly mortgage payments, who say they will try to "hang on" for another month, year, or whatever, until "the market turns around".  They will end up slowly bleeding to death.

And about now, many people are realizing that the market won't "turn around" enough in the next decade to make up for the 30-50% losses in some areas of the country (Florida, Las Vegas).  In areas that were heavily overbuilt, there are not enough buyers for all the inventory on the market.  And every month, new foreclosures depress prices further.

So, nearly two years after the "big crash" of 2009, people are just now starting to throw in the towel and let their homes go to foreclosure.  These are people who probably should have thought about throwing in the towel much earlier.  Unfortunately for them, they've squandered a ton of dough, trying to "stay in the house" in an overpriced mini-mansion.

Is this all bad news?  Well, if you are the guy just foreclosed upon, yea.  Although many people, after they've been through foreclosure, report a sense of relief.  They no longer have to struggle to make mortgage payments they cannot afford.  And the "worst case scenario" turns out to be not as bad as they thought.  They are still alive and well, they find work, they unchain themselves from the bandwagon of materialism.  They learn that owning things, fancy things, is not freedom, but a particularly onerous form of slavery.

And if you have been foreclosed upon, don't panic.  Yes, everyone in the USA is brainwashed from birth to think that "home ownership" is the "American Dream".  But in reality, owning a house is just that - owning an object.  It is materialism, pure and simple, nothing more.  Your life is more than a place to hang your hat - and there will be other places to hang your hat in the world.  The idea that you have to kill yourself because you are losing your granite countertops and vinyl siding is idiotic.  Buck up and move on - and move to a State where there are jobs, not unemployment.  Use this as an opportunity, not an excuse for stasis.

Is this a bad thing for the banks?  You bet - and for the rest of us who own bank stock in our 401(k) plans (you probably do and don't know it) or mortgage-backed securities or other real estate related investments.  We all take a hit here - not just the poor sap with the mortgage.  In fact, the homeowner may end up being dinged the least of us, if he played his cards right and got out early.  The person who tried to keep the home and slowly bled to death - he got hurt badly.

But there is an upside.  Medicine tastes bad, to be sure.  But swallowing it all at once is better than to sip it for months, keeping the bad taste in your mouth.  The sooner these properties go back on the market and find new owners, the sooner the economy will turn around.  At lower prices, the new owners can buy them without being "financially stressed" with a huge mortgage.  So they will spend more and the economy will improve.

At lower prices, Real Estate is cheaper to rent out - meaning businesses can now rent store space for a lot less, and thus be less stressed as well.  One bad side-effect of the Real Estate boom was that many smaller businesses found themselves priced out of the market - with rents on store and restaurant space going so high as to make the business model unaffordable.  And many a business owner was chagrined to find himself tossed out of his retail space when the landlord sold the property for redevelopment (which may or may not have occurred).

Just as the crash of the tech market in the 1990's produced an over-supply of cheap IT capability - leading to the subsequent Internet boom of the 2000's, the real estate market crash of the 2000's will mean a slew of cheap real estate for the 2010's.  This will hurt all of us invested in Real Estate, to be sure, but will provide opportunities for people and businesses, when they realize that the staggering overhead of rent or mortgage has dropped significantly.

Pricing adjustments can be harsh, but are necessary, particularly when bubbles or balloons have artificially raised prices.  This may be little comfort to the homeowner who has "lost his home" due to foreclosure.  But the upside is, there are other homes out there - for sale or rent - for a lot less money now.  Paying less per month for a place to live is the "upside" we all will benefit from in the long run.

So expect to hear stories about foreclosure for the next 1-3 years, at which point, it will taper off.  I bought foreclosure properties in 1995, nearly six years after the "peak" of the 1989 bubble.  It takes that long for properties to work their way through the system, or for homeowners to realize they are behind the 8-ball and give up on the property.

If that bubble is any guide, we can expect a turnaround sometime in 2013 to 2014 in the Real Estate market.  By 2023, people will have forgotten everything they learned from this recession and will start bidding up properties to idiotic prices again.