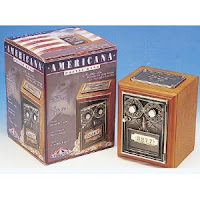 A coin bank like this is not a bad thing to have. But if it has been sitting a closet for the last five years, what does that say? By the way, this "rare collectible" can be had on Amazon.com all day long for forty bucks.


We had a garage sale today, and made $500 in sales. Not bad for the first day. But the hardest part was letting go of "things" and selling them. It is amazing how many things accumulate in your life.

And, ironically, you will find that your spouse will blithely let go of an 19th century heirloom clock without so much as a thought, and yet hang onto a giveaway souvenir item as a precious memento. Selling things can cause stress in your life and your relationship. The following conversation is not atypical:

ME: (after rummaging through a closet of stuff we haven't touched in five years) "What about this coin bank? Maybe we should sell that in the garage sale?"

HIM: "Not the coin bank! We have to keep that!"

ME: "Really? Why? It has been sitting on a back shelf in this closet for five years now, untouched. We never look at it, use it, put it out on the table. Why keep it?"

HIM: "Well, it is too ugly to put out in the living room. But it is worth something, we should keep it"

Note: Here is the first argument often used to keep things. "It is worth something." Well, I hope so, that way it will fetch a good price at the garage sale! Again, as I noted in my garage sale posting, trying to sell worthless items at a garage sale makes little sense. The argument that something is "worth something" and thus is worth hanging onto, despite its utter lack of use is nonsense. If something is worth something and not being used, then that is all the more reason to liquidate it and receive value for it - before it is worth nothing at all.

HIM: "Well, it did come from your Mother, think of the memories it brings back!"

ME: "You mean the recurring nightmares, waking up screaming, aren't enough? How many keepsakes do we need to remember an alcoholic, violent, Lesbian Mother?"

Keepsakes. The idea that you have to save souvenirs or mementos of occasions or events or people can often be a trap. Because as you age, the number of such items will accumulate linearly, if not exponentially, until you drown in a sea of them. Plus, you are likely to inherit boxes of such garbage from parents and even grandparents. I have a walking cane which is a souvenir of the 1939 Wold's Fair - the trylon and perisphere. Great. Cool. What the fuck good is it, other than something to trip over?

HIM: "Point well taken. But I use that coin bank to keep my Eisenhower dollars and 50 cent pieces in! They are worth something!"

Again, the "worth something" argument. Before you make it, better check out the market value. I log onto eBay and check out some auctions on 50 cent pieces and Eisenhower dollars (circulated).

ME: Honey, an Eisenhower dollar coin, circulated, is worth about..... a dollar. Why are we keeping these coins again?

HIM: Really? I was always told they were rare and collectible by my Dad.

People who don't understand money often confuse rarity or collect-ability or age with value. I had a 1941 Ford 9N tractor in immaculate condition. A 70-year-old antique and a talisman of a bygone era. Worth millions? Hundreds of thousands? Tens of thousands? Hardly. Three grand is all she would fetch on eBay. Like any other commodity, the law of supply and demand applies, and with old tractors, the demand is people wanting to collect them, and the supply is, well, pretty high, as these never wear out. Similarly, with circulated coins, the demand is very low for scratched-up coins that have been in circulation, unless they are very, very rare. Silver Eisenhower dollars in un-circulated condition might fetch $25. Normal clad dollars in circulated condition are worth close to their face value. "Collecting" them makes no sense. In fact, there is little point to collecting coins unless you are a coin collector and know the value of these things. Otherwise you are just wasting your time.

ME: Well, your Dad was a nice guy, but he was wrong about a lot of things, wasn't he? Why should we keep these old coins and a box to keep them in, if we never look at them and just keep them in a corner of a closet somewhere? It is just clutter, not to mention money that is just sitting around.

HIM: Well, I don't know. We should just keep that old bank is all. I like it. I want it. I want to keep it!

ME: OK, well I'll put in on the table in the living room.

ME: Well, alright then. You tell me explicitly where you want to put this, not in a closet or box somewhere, where it will be used on regular basis and not just collecting dust.

ME: It goes in the garage sale.

You get the idea. The conversation went in circles like this for many minutes, until I put my foot down. Keeping an ugly item because it is a keepsake or "worth something" is silly nonsense, particularly if all you do is keep it in a dark corner of your closet. Surround yourself with beautiful things - get rid of the rest.

We end up paralyzed by possessions this way. Wedding china, glassware, and silver, are prime examples. "Too good to use", they sit in closet shelves and gather dust. Used, they chip and break, or are too ungainly or ugly to use. So what is the point in having this stuff? Use it up, throw it out, and move on, or sell it to someone who really wants it.

And we have cupboards full of this stuff - grandma's ugly wedding china or glassware that no one else would take (that should have been a tip-off right there). Either use it, or sell it. Letting it clutter up your life makes no sense at all. Saving such items for "special occasions" means only a lot of hand-washing as such items gather dust on the shelves.

The sad thing is, oftentimes we do not rid ourselves of clutter until forced to do so by a move or a life-changing event (retirement, loss of a spouse, moving to a nursing home) and thus hang on to crapola, not realizing it is dragging us down.

In the last week, we have cleaned out closets, attics, and other storage areas, taking out books, car parts, clothes, shoes, dishes, pots and pans, appliances, and other "junk" that we had bought over the years and now were not using and had not used for years. Why keep it? Why let your life get cluttered?

Here's the deal: If you really think you need a Presto Fry-Baby in the future, chances are, you can buy one for cheap at the big-box store, or failing that, find one for a dollar at a garage sale. But chances are, you won't really "need" the Fry-Baby for the very same reason you are getting rid of the one you have - you simply don't use it. It was yet another small appliance purchase that you rang up on a credit card and are still paying off. Cut to the chase, admit defeat, dump it and move on - and stop buying crap like that. You want to fry something?  Use your frying pan. It's free.

So, after the first day of the garage sale, we have $500 more in the bank, and some less clutter. We still have easily $1000 of stuff to get rid of, as well as countless items in closets, storage areas, basements, and attics, to unload. It is good to purge periodically like this. I only wish I could avoid the urge to "save" things in the first place.

The next house I buy will have NO ATTIC or storage space. If it don't fit in the house, it goes to the curb!