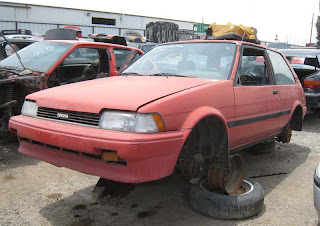 Is yanking old car parts off a junked car worthwhile?  Usually not.


You've seen the ads in the Pennysaver.  The local "Pick and Pull" has some new cars in!  Come on down boys, and pick them apart for some good used parts!

Like the drones on the Borg Cube, many folks fall into the trap of buying used parts - picking workable parts off of wrecked or junked cars and installing them on their personal vehicles.  Are used parts a good bargain?  In many cases, no.  And here's why.

Like used tires, used car parts may be partially worn out.  As a result, all you are doing by installing used parts on your car is replacing a worn-out part with one that is just nearly worn-out.  Thus, you will end up revisiting the job later on, when the nearly worn-out part you installed fails again shortly.

Now, if the parts were super-cheap or free, this might not be a bad scenario, if your time and labor is essentially worthless.  But my experience with "junkyards" is that they tend to charge a lot of money for parts of questionable value.

For example, the starter motor in my truck fails.  A new starter might cost on the order of $100.  A rebuilt one can be had for maybe $50.  The junkyard wants $25 for one out of a wrecked truck.  A real bargain, right?

Both the new and rebuilt starters have new commutator brushes and will provide many years of good service.  And the cost is not that great.  The "used" one, however, has an unknown service life.  If it was pulled from a late-model wreck, it may be in good shape.  If it was taken from a junked car, it may be only days away from failing.

And if you factor in your time and effort, in pulling the used part off the wreck (as is the norm these days at junkyards like pick-n-pull) you are spending more time than necessary.  And since the used part is not likely to last as long, if you keep the vehicle, chances are, you'll do the job again - doubling your labor.

Even the rebuilt starter will have some sort of warranty, while a used part rarely does.  For most cars, the stater motor might be replaced maybe once or twice in its lifetime of 150,000 miles.  If you keep throwing used starters at it, well, you might be doing this job over and over again.

And as my article about the Weibull curve notes, as a car gets older, you will have your hands full with repairs as it is, so when you do fix something, you want to make sure you are doing it right and for good.  If you are doing it yourself, and saving $75 an hour on labor, why go cheap on parts?

And unfortunately, poor people fall into this trap again and again, which is why they stay poor.  Joe Paycheck buys a clapped-out car near the end of its design life, and spends countless hours with it jacked up on tree-stumps in his front yard, "fixing" it.  He buys used parts to "save money", but ends up wasting tons of his time.  And the car is never fixed for long, as the used parts rarely last long and as the car is so worn out, something else breaks almost immediately.

So how do these used car parts places stay in business?  Well, the same way casinos do.  People make idiotic economic choices - look around you.  People convince themselves they are getting a "bargain" at bad bargain places, and such places stay in business.  Most people make horrible economic choices in life.  To succeed, you need only make slightly more rational ones.

Are there times when used car parts make sense?  Yes, in limited circumstances.  For example, you have a car that needs a new fender, because you've smashed yours into something and you don't have collision insurance.  If priced properly, a used fender could be a good bargain.   If it is in a matching paint color, particularly so.  Similarly, trim and interior pieces, nearly impossible to get at a dealer (for a reasonable price) might be found at a junkyard.  These are parts that don't "wear out" per se.

But again, check the Weibull curve before "investing" money like that.  Usually, when things like engines and transmissions go south, the car is reaching the end of its design life.  Even a used transmission, with labor, could end up costing more than a car is worth.  You might be better off scrapping the car (sending it to the pick and pull) than throwing another $1000 at it in repairs.

Used car parts are rarely a bargain.  Fishing this far downstream rarely yields any substantial bargains.  It is a lot less hassle and a lot less money and work to simply buy something newer and spend less time with dirt under your fingernails.


UPDATE:  Before going to the pick 'n pull or other junkyard, price out the parts you are looking for both online and at local stores.  Some junkyards charge more for used parts than retailers charge for new or rebuilt parts.  Some new parts can be remarkably cheap!

Second, don't let them pull the old "bait and switch" on you.   I've read countless horror stories about yards that will quote you one price for a part, and when you go pull the part, they then say a different price.   Some people, after spending an hour pulling a part from a car, give up and pay, instead of walking away - and end up paying more for a used part than a new one.

Also, beware of the multiple parts game - they quote you a price for a part, and then claim it actually comprises several parts, and their price was only for one portion.  So you get an alternator, and they claim the pulley and mounting bracket are separate parts for an extra charge.

Don't be afraid to leave the parts on the counter and walk away.   Odds are they will cave in, and if not, well, you are better off buying new or rebuilt parts and letting them go out of business.

Used parts aren't worth much.  The real value in a junked car is the scrap metal and any money they make selling parts off a car is just found money to them.
Newer Post Older Post Home