Science versus Religion - a false choice 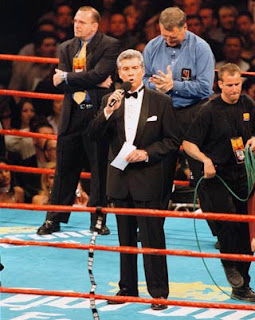 Many folks think that Science is some alternative to religion - an alternative that disproves the existence of God.  And folks who think this are not Scientists.  And ironically, they are either atheists or religious fundamentalists.  Why is this?

"LAY-DEES AND GENTLEMEN!  I have before you, in the right corner, the representative of Science and Ev-o-lution, Mr. Charles Darwin!  (Boo!  Hiss!) and in the left corner, Mr. God Almighty himself, creator of the universe, all-powerful and all-knowing! (cheers!).

Now Gentlemen, you know the rules!  No below-the-belt, no miracles, no evolving!  Return to your corners and.... GET READY TO RUMBLE!"

Such a scenario would never exist, of course.  And yet many people on both the far left and far right, like to pit Science against Religion, as if they were competing brands of gasoline.  And yet the comparison is inappropriate and incorrect.  One is not an alternative to the other.  Nor does one "disprove" the other.

People on the left, usually atheists, like to claim that Science knows all the answers and has disproved the existence of God.  This surely will come as a surprise to real Scientists, who never set out to do any such thing, nor claim to know "all the answers".

Many on the Right, usually fundamentalist Christians, believe that Science is geared toward disproving the Bible and thus they denounce Science as a false religion.  But again, real Scientists never claimed to be starting a religion, nor trying to "prove" or "disprove" any facet of the Bible.

And on both the Left and Right, the people making these claims are not Scientists, but usually trouble-making Liberal Arts majors.

The goal of Science is to study the world, develop a model based on observation, devise an experiment to prove the model, and then revise the model in view of the experimental results.  In that regard, Science is never "done" figuring things out, as each new discovery leads to revision and correction of previous theories and ideas.  Science, by its very nature, will never figure everything out, as there is always another layer of the onion to peel.

For example, in particle physics, we keep chopping up the atom into smaller and smaller bits, with the latest gag being "string theory" where "strings" or "branes" define sub-atomic particles.  Perhaps in a decade or a century we will laugh at this model (as we did with the plum-pudding model of the atom of only a Century ago).  The point is, we will never know all in Science, and there is even a theory to that effect.

And Science cannot, and never will, answer questions like "what happens to you after you die?" or "Is there a God?" or "What is consciousness, exactly?" or "What is the meaning of life?"

Now, some atheists may argue that when you die, you decompose, and that's it.  But there is no Scientific evidence to suggest that is the correct answer.  If you believe that, you do as a matter of faith, not Science, so don't deceive yourself.

Many atheists or self-styled atheists reject conventional religion (but instead adopt an atheistic faith, as noted above) as  a reaction to the corruption and vileness of many mainstream Religions.  While Religion may have initially been intended to serve a higher purpose, in the material world, it is often hijacked by all-too-imperfect humans to worldly ends - usually to the accumulation of wealth, power, and control.

In that regard, you can't blame so-called atheists for rejecting Religion.  But embracing Science is an alternative to Religion is not right either - it imbues Science with something that Scientists never intended.

Now granted, anyone who has flown on an airplane realizes that Angels don't fly around in the clouds with wings and harps.  But disproving specific aspects of various religious texts does not mean that all religions are totally bunk - or that faith cannot be a comfort to people in answering the unanswerable questions in life.  Science may accidentally "disprove" aspects of Biblical stories, but that is not its intent.  And disproving one aspect of the Bible, Koran, or Torah does not mean the entire Religion should be tossed on the trash heap.

Many Scientists have profound religious beliefs, even if they are not latter-day snake-handlers or believe in the Book of Revelations.  But the study of Science, is, in a way, an examination of the fingerprints of God on the Universe, however you perceive God to be.

If you've ever taken a course in Electromagnetics, for example, you'll understand how little we understand how the universe works.  Ever wonder how an electric motor works - or a radio?  Well, when it gets right down to it, we can measure how electrical fields or electromagnetic radiation works, and design machinery to take advantage of these phenomenon.  We can even devise "models" describing how these natural phenomenon work.  But truly understanding?  Not quite yet, it seems.   Unified field theory is still years away.

And beyond the physical world is the world of pure thought.  I took a course in Number Theory in college once, needing an additional credit in Math to graduate, and assuming (wrongly) that this would be an easier course than yet more Calculus.  Most of my fellow students were future cryptologists for the NSA.  One was my former Math teacher from High School (she dropped out).  It was a mind-bender of a course, and one thing I took away from it was a profound religious belief.  The structure of numbers (and there is a structure, beyond 1..2...3....) is quite unique and irregular (take prime numbers for example).  But moreover, this structure underlies all physical manifestations of the Universe, and moreover is consistent from one end of the Universe to the other.  The arrangement of numbers is, to me, the clear fingerprints of God - or something greater and more powerful than we can comprehend.

Very few Scientists, at least the ones I know, are the stereotype smug professors who believe that Science disproves the existence of God.

And yet, that is a popular stereotype on both the Left and the Right.  Christian fundamentalists, in particular, seem to think that Scientists and college professors live to disprove the Bible.  One place you see this a lot in in so-called Chick Tracts, which are little comic books you may see scattered around bus stations and restrooms - designed to convert you to fundamentalist Christianity.

In Chick Tracts, the buffoon college professor, usually portly and balding, tries to ridicule and browbeat his students into denouncing God in favor of evolution.  It is a parody of what real Scientists believe.


In one Chick Tract, entitled Big Daddy, the portly, balding, and smarmy college professor tries to browbeat his students into denouncing God in favor of evolution.  Anyone who questions his teachings is ridiculed at length, until one beaming Christian boy stands up to his assaults and then flusters the know-it-all college professor with Bible verse.  Intrigued, the other students ask him about Jesus.

Just as the atheist view of Science is very simplistic and wrong, this fundamentalist view is equally wrong.  If there is a college professor who tries to "disprove" the existence of God, surely he would be in the philosophy department, not in Science or Engineering.

But ironically, the far Right ends up believing what the far Left contends - that Science is set out to pit itself against God.  And again, this is an argument being made by both extremes by people who are not Scientists.

Science sets out to answer quantifiable questions, such as "how many electrons are there in a carbon atom?"  It does not claim to, nor can it even try to, answer questions such as "is there a God?" or "What happens when you die?"  Anyone claiming to be trying to "solve" such problems is not a Scientist, but a fraud.  Anyone who claims to have answered such questions using Science is a fraud, period.

Faith doesn't set out to "prove" anything.  It merely is there as a comfort to people in trying to address these underlying and frightening questions in life.  Ridiculing or trying to "disprove" faith accomplishes nothing except to make the person making the attack look more foolish than the faithful.

On the other hand, neither should faith be taken as a literal interpretation of the world.  Many on the far-Right are trying to make a "Science" out of faith by positing "creationism" as a "science" and by trying to "prove" that certain aspects of the Bible are true (e.g., searching for Noah's Ark).  I think this misses the point, too, and is just as dangerous, if not more so, than trying to disprove Religion with Science.  You can't disprove Religion with Science, but you also can't prove it true, either.

And you can't create a "Science" out of faith, as by its very nature, faith is not scientific.  As I noted earlier, faith is not questionable and is taken on belief.  Science is always subject to review and interpretation and updating and correction (which some Religious people take as a sign of weakness or "proof" that Science is "wrong".  This is idiocy.  Science is always "wrong" in that every theory is updated, corrected, repudiated, and up for revision and correction all the time.)  So trying to disprove the existence of God or Moses using Science is about as silly as making  a Science textbook out of the Bible.  Both parties are missing the point.

So...what does this have to do with finances?  Probably nothing, except that both self-styled atheists and fundamentalist Christians sometimes annoy the piss out of me.

That, and obsessing about the imponderables in life is probably a sure way to squander what little time you have here on this planet and let a real life pass you buy.

Because regardless of whether you believe the afterlife to be decay in the grave or flying with the angels, the bottom line is that both views embrace the reality of a finite and limited life.  So rather than divert what finite energy you have trying to chase down "answers" to imponderables, you might better channel your energies into the living.

Because if you really want to know what happens when you die, you need only wait a few decades, and you will know soon enough.

And I guess that is my view on the question.  Live a good life.  Try to be nice to people.  Try not to be evil.  And as for whether there is a God or an Afterlife, the answers to those questions will be apparent to you soon enough.  And we all get to find out, in the end, for sure, what the answers are.