Do you want to live in the Northeast? Probably not. 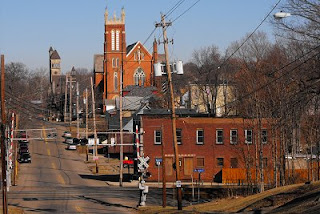 The Northeastern United States has largely been economically depressed for the last two decades - and will continue to be that way.  The high cost of living and high cost of doing business has made life harsh for its inhabitants.
I was at Lowe's the other day in Geneva, New York, and was trying to convince myself that $2800 wasn't too much money to pay for a snow blower.  Then it hit me - the cost of winter, among other things, makes living in the Northeast staggeringly expensive.

Consider this:  In Georgia, we have high utility bills in the summer to pay for our Air Conditioning.  But these bills are still lower than heating bills in New York - the rates are a lot less, for starters.  Plus, you don't have to shovel heat.  That alone is a big plus.

So from a utility bill perspective, living "down South" is about the same, in terms of cost, maybe cheaper.

But wait, there's more.  Add in the wear and tear on your car, due to salt, snow, and cold, and suddenly, you are rocketing ahead in the South - where a car can last twice as long as "up North" and still look brand new.

But it gets better - tax rates in the South are about half that in New York.  So your property taxes, instead of being $7,000 a year, are only $3,000.  Income taxes? In many Southern States, very small, if not non-existant.  Sales taxes?  Nearly HALF what they are in New York.

It dawned upon me, looking at the $2800 snow blower, that the cost of living in New York was not only higher than elsewhere in the USA, but staggeringly higher, due to all these concerns.

Oh, but I forgot about those annoying and ineffective deposit bottle laws - which make the price of beer and carbonated beverages about 10-15% higher than in other States - in addition to the deposit, and the hassle and inconvenience of returning the bottles.

Then I went to the gas station.  The gas pumps here all have the ratchets removed, so you have to pump gas by hand.  I put my key fob in the lever so the gas pumps itself while I check the oil.  The guy at the gas station came out and said "Hey, you can't do that in New York - its a STATE LAW!"

And that's when it dawned upon me why I needed to leave New York.  The State Legislature has nothing better to do than regulate things like whether you can have a ratchet thingy on the gas pump levers.  Albany sees all and knows all - and is in the pocket of organized crime.  And New Yorkers just love to be told what to do by big government.  No one questions the laws in New York - the government knows what is best for us, down to how we pump our gas.

So the problems of high taxes, high regulations, no jobs, high utility bills, rusty cars, stinky deposit bottles, and just a pain-in-the-ass high cost of living and high cost of doing business will NEVER EVER go away from Central New York.  It is that bad.

I met a young fellow the other day who was transferred to Central New York temporarily by his company, from Virginia.  They want him to stay here permanently.  But he is reluctant to do so, even though property values are half what they were in his home in Virginia.  All the other costs make life up here more difficult, not to mention more annoying.  Throw in snow, ice, rain and crappy weather for 8 months of the year, and well, it really seals the deal.  He's moving back to Virginia, even if it means taking a pay cut.

It's September.  The Summer is over here in Central New York.  The skies are turning gray and rain falls in a steady mist.  It is depressing as all get out.  I think the depression that the winter months create here induce a sense of passivity in the natives, which is why things don't change for the better.

The attitudes in the South and West are more refreshing.  People are more optimistic and less likely to look to Government as the solution to all their needs.  In fact, they tend to say "Screw the Government" and want less intrusion into their lives, not more.  In Georgia, no one tells me whether I can have a ratchet thingy on my gas lever nozzle, or where I have to put my beer bottles when they are empty.

If you get a job offer in the Northeastern United States, consider it carefully.   And by the Northeast, I mean anywhere East of Michigan and North of Virginia - all are basically depressed States and depressed economies.   It is an expensive, cold, depressing place to live, rife with corruption and organized crime (Organized crime even owns their own State here, Rhode Island).  The cost of living will trump any advantages you may see in terms of lower priced housing.  If your company does make you move here, be sure to ask for a pay raise to cover all these increased, but often hidden, costs.
Newer Post Older Post Home