Tax Protesters (Tax Deniers) and the Secret of Wealth. 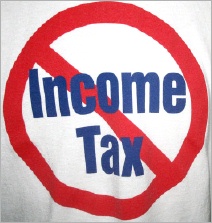