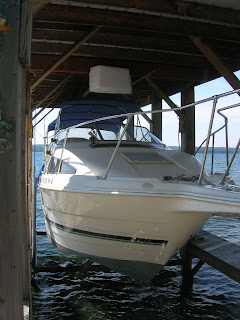 My boat for sale on eBay.   One problem in selling something on eBay is that a lot of people don't understand it is an auction, and think it is a classified ad.  They want to buy it now, when you have it listed as an auction.
As I noted in "Never end the auction early!" and "some eBay tips", people will contact you on eBay to buy something, and ask you to sell it to them for a fixed price and end the auction early.  They typically do this when you list something with a very low starting price.  The count on you being desperate to sell, as maybe you are new to eBay and you haven't had any bids yet, and there are only a few days left in the auction.

Relax.  Stick to your guns.

Most auctions don't get bids until the last day, last hours, even last minutes or seconds.  If you "sell it now" you may be walking away from a tidy profit from real bidders.  I bit on an item once, with ONE SECOND left in the auction.  If the seller had "ended the auction early" he would have walked away from double what the initial bid was.

The other gambit I see a lot is the endless e-mailer - he sends endless e-mails with questions about the item (often questions that are answered if you read the listing).  He also wants 100 pictures of the car/boat/motorcycle, e-mailed directly to him.  He bothers you, he nags you, he runs down your item.  He offers to "take it off your hands" for $500 less than the minimum bid.

But one thing he never does is actually bid on an item or buy it.  In fact, there is an inverse relationship between the number of pesky e-mails and the likelihood of bidding.  If someone sends you one e-mail asking a simple question, they might bid. 2-3 e-mails, probably not.  5 or more, requesting pix and more information - definitely not.

Many of these folks are sad people who are lonely and daydream about buying your car, boat, or motorcycle.  To them, the process of buying is as important as the actual purchase itself.  So they get involved in these serial buying efforts that never come to anything, but annoy lots of sellers.

Be brief with folks like this.  If the information is on the listing (and I put a lot on the listing) and there are lots of photos, then just say "see the listing".  You are not obligated to take 1000 pictures and e-mail them to Timbuktu.

Note also that some con artists "harvest" photos this way and use them to set up their own fraudulent listings on eBay, Craigslist, autotrader, or other locations.  Many a photo requester is actually harvesting photos for their own nefarious purposes.

Perhaps also, the nagging non-bidder is trying to make the process a "hassle" for you, so that you will cave in to his low-ball demands.

In most cases, however, sales on eBay follow a pattern.  The people who e-mail me a lot either bid low amounts, or never bid at all.  The winning bidder comes out of nowhere at the last minute and bids on the item.  He never e-mails you ahead of time, or calls, visits, or otherwise makes his presence known.

So all that effort you put into trying to "woo" a bidder is pointless and fruitless.  These people never bid, period!  But they do make selling things harder on eBay, perhaps by design.

Don't waste lots of time on laborious requests for data and photos!  Most of these people are just time-wasters - not bidders or buyers.

That has been my experience, anyway.  eBay can be great for selling things, but you have to be astute and filter out the con-artists, low-ballers, and time-wasters, otherwise you'll get frustrated and quit.
Newer Post Older Post Home