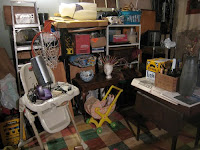 Many folks put "storage space" at the top of their list when buying a home, RV or boat. But storage for what?
One interesting thing about Frank Lloyd Wright is that in most of the homes he designed, there were not large closets or many of them. Wright designed the entire house, often including the furniture, whether built-in or not. In one celebrated instance, he even designed the clothes for the owners.

When asked about closet space, he responded that people should own less things, and in that respect, he was right. In a Wright home, you own few things - but they are very fine things you never tire of. There is no need to "store" your fine sculptures and Japanese wood cuts. And there is no need for gadgets and gimcrackery.

Today, large closets are the norm in new construction. In many homes, closets are larger than bedrooms of days gone by. I have friends who have built new homes, just to have more closet space and storage space for their "stuff".

But if you think about it, this is a ridiculous proposition. Oftentimes, the "stuff" being stored is worth little, if anything. Outdated electronics, clothes that no longer fit, cheap used furniture, and just plain junk, memorabilia, papers, and the like, are worth far less than the cost of the house itself - and the cost of the extra construction to build storage for these "things".

Many more Americans rent storage space to store "things" (see my posting, The Great American Storage Locker) convinced that since they "paid money" for something, it is obviously worth keeping, even though they have to "pay money" to store it. Buying or building a larger home with larger closets to store incidental junk is the same idea - you are paying more, in terms of housing cost, taxes, and utilities, for space to store things that have a trivial value.

And that, in a nutshell, is what is wrong with most "consumer" finances in America. Americans, trained to live on a weekly or b-weekly income, look at life in terms of monthly payments, installments, or small, crappy purchases of $500 or less that they can put on a credit card. Buying big ticket items and paying cash - and viewing money in terms of overall cost, not cash-flow - is alien to most Americans.

So most of us squander a large portion of our incomes by buying small, shitty things and putting them on our credit cards - and then shoving them in closets, drawers, desks, storage lockers, garages, attics, basements, or wherever else we can find a place.

Frank Lloyd Wright was right. We are better off making do with less "stuff" and owning a few, very nice things instead. Quality lasts a lifetime, while cheaply made garbage goes to the curb in a matter of years - or ends up stuffed in a closet somewhere.

The proliferation of cheaply made consumer goods from China has exacerbated the problem. We buy more junk, because it is cheaper than ever. We do not value what little we have, because we have so much. Back in the day, if you had one picnic cooler, chances are, you treated it carefully, as it represented a week's wages. Today, you might have several, and not even know where half of them are.

Stuff is cheap, so we buy more when we can't find what we do have, which in turn adds to the problem. I had six or seven heavy duty orange extension cords - why, I do not know. Do I really need more than one? Probably not. My parents and grandparents might have had one extension cord that they treated well. Since they only had one, they always knew where it was.

And these are just examples of "stuff" I have found wedged in closets, sitting on shelves, and basically being unused. Why keep it, if you are not using it? Why pay money to store "things".

One mistake we made, in retrospect, in buying a home in New York was that we felt we needed lots of "space" to store "things". We needed room for our furniture, files, stuff, cars, junk, clothes, etc. Rather than look at this as an opportunity to downsize and live on less, we ended up expanding to a larger home - and filling it to the rafters with possessions.

The stereo system we bought in 1980 was dear to us and took months to pay off on our credit card. It was hard-fought and hard-won. Selling it or giving it away seems like a form of surrender. After all, at the time we bought it, we felt that once we had a "good stereo" we'd be set for life!

But such is not the case - and it is an illustrative example of why relying on the material is false thinking. As Mary Baker Eddy once put it, the Spiritual is all that matters, material is mortal error.

Of course, not wanting huge closets and not filling them with crap is going against the great American Way of Thinking - and you are likely to be labeled an oddball if you don't confess to wanting giant closets in your mini-mansion or slide-outs in your motorhome.

But the advantage of thinking differently than everyone else is that you can snap up the unseen bargains out there. While your friends and neighbors are mortgaging themselves to the hilt for five bathrooms and tons of closet space, you can pay far less per square foot for that smaller house with the small closets that the Realtor said was "hard to sell".
Newer Post Older Post Home