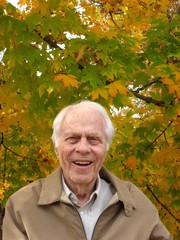 
When I was at Syracuse University, I remember meeting with Dr. Sol Gordon.  He was one of the leaders in the field of sex education at the time, sort of a less famous "Dr. Ruth" - and most of us looked up to him.

I was talking with him one day, and I asked him what I should do to advance political causes in my life.  I was young and felt that being a "causista" was something noble or desirable to do - after all I came from a family of such idiots.

His answer was concise and sound.

"What is it you are here at Syracuse University to study?" he asked.

"Then be the best Electrical Engineer you can be" he said.

You see, taking care of yourself is the first and foremost thing you should do, before you go running off to save the world to take on other people's "causes."

And you can do more to change the world if you are successful.

For example, I did something to change the world the other day.  I donated money to the Obama campaign.

"But wait!" you say, "I marched in protests, rallied for Obama!  I held up a hand-made sign!"

While all of those things are important, there are two things that get candidates elected to office in the USA - money and votes.  And the first gets out the second.

I wouldn't have been able to do the first if I was some dirt-poor "community organizer" trying to "raise awareness."

Dr. Gordon was right - trying to be an activist is fine an all, but doing my best in my chosen field of endeavor was probably a better idea.  And by succeeding in what I set out to do, I end up as a role model for others.  Living in the margins as an activist accomplishes little or nothing and insures that my political views are marginalized.

Many young people never get that advice - or if they do, fail to take it.  They feel that by sacrificing their lives for someone else's cause they are "doing good" when in fact they are doing little, except perhaps being a pawn in someone else's game.

Be yourself.  Take care of your self.  It is not "selfish" - it is your obligation in any society.

We have enough crackpot causistas in the world, and most of the time they just cause trouble and accomplish little, if anything.

UPDATE:  This memorial site has some conflicting data on Dr. Gordon.   I have to admit, he did try the "hypnosis" trick on me, but I guess I was too dumb to figure out what he was getting at.  I still think he gave me good advice.  As for the other?  Probably my loss.
Newer Post Older Post Home