Are Americans Jumping Back Into The Fire? 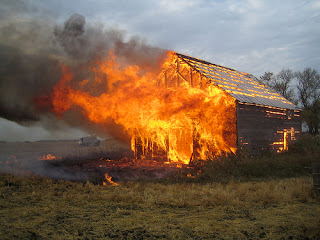 The problem with horses is, if the barn catches fire and you rescue them, they will turn right around and run back into the burning barn.  Horses are pretty dumb.  People aren't much smarter.

"Recession's over folks!  Go back to spending like drunken sailors!"  - that seems to be the message I am getting from a lot of people these days.

I've met folks who have lost tens, if not hundreds of thousands of dollars in Real Estate in the last few years (myself included) or have walked away from houses and mortgages.  And they grouse about what a raw deal they are getting.  And some, I know, have gone back to work to make money to pay the mortgage on underwater mini-mansions that they aren't even living in.

They are stressed and have been beaten down.  So whaddya think they are all doing?

More of the same.  Buying brand-new cars.  Refinancing their homes to take cash-out.  Going further into debt, even though they are only a few short years from retirement.  I scratch my head and think, "Don't people ever learn?"

Economic memory for the average consumer is 18 months, I estimate, and that seems to be a number that is accurate.  Because not many people remember February 2009, or the bad final days of the Bush Administration, when gas went to $5 a gallon and the stock market started to tank, and Bush bailed out the banks.   (yes, Obama-haters, that happened on Bush's watch, as did the economic meltdown).

So, that's all done.  Let's go back to doing the same old shit that got us in trouble in the first place.  People who are not secure in their jobs, borrowing more, rather than paying off, and only 10-15 years or less, to retirement.

And the reasoning used is still the same.  "Well, that old car was like, 8 years old and had 100,000 miles, I'd better dump it for a brand-new car, before something expensive breaks!"  Yea, that makes a lot of sense.

Living the cash lifestyle isn't as glamorous.  But then again, it ain't as stressful, either.  I have no worries about losing the house to the bank, as there is no bank.  I have no worries about losing my job, as I don't really need much money to live, anymore.  While I can't park that in my front yard and point to it, it is worth far more to me than a fancy new car.

Freedom.  It is a very expensive thing to own.  And yet so many people sell theirs, all for consumer goods and transitory things.

Funny thing, too - the people heavily in debt with multiple mortgages, car payments, and credit card debt, laugh at me and my old car.  "Bob can't afford a new car!" they giggle, like High-Schoolers.  I just smile and nod.  Car payments.  After age 50.  What a concept.....
Newer Post Older Post Home