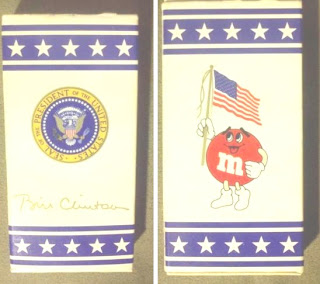 It is not hard to sell things on eBay, but jeez, you gotta at least put some effort into it.
I recently came across something in a drawer that I had knocking around for many years.  It was a souvenir box of M&Ms that they give away on Air Force One.

I know that some people collect Air Force One memorabilia, so why not sell it on eBay?  Might get a dollar or two from it.  The listing fees are zero these days, so it can't hurt to try.

A lot of people try to sell things on eBay and are unsuccessful at it.  And it is not hard to see why.  Their listings suck, and their prices are screwy.  It is like that episode of the Simpsons, where they have a community garage sale and Agnes prices her candy dish at $90.  "It's a candy dish, Ned, ninety dollars!"

Anyway, I go on eBay to see if anyone is selling these, and there are two for sale - for $20 each plus postage!  Another fellow is selling the empty box and yet another is selling a box that look like it went through the wash.  None mention that hey, these were handed out on Air Force one.

Instead, you see these generic descriptions, in 10-point type, with key-word SPAM in them:


This box is unopened and the candy is still inside, but the box is damaged.  Please see pictures.

So I search online, and sure enough, these are an Air Force One item.

Before returning to Andrews Air Force Base the stewards pass out the most prized of all White House travel souvenirs…The Presidential M&M’s. They are exclusive to Air Force One and are limited edition. Each box has the Presidential Seal on its front and the autograph of the current president embossed below it.

So I put this stuff in the listing, write up a reasonable description, price it at $10 plus shipping, and we'll see what happens.  Takes 5 minutes of my time, and hey, it might clear out a desk drawer.

And you never know.  I sold a souvenir shoe once, on eBay, and got $267 for it.  It had been handed down through the family as some great heirloom, but no one really wanted it, and it spent most of its time in a box on a shelf.  It wasn't even really related to our family, but the Sands family of Long Island.  And since I have no kids to pass down an ugly shoe to, why should I keep it?  Better to sell it to a collector who will treasure it - or a Sands family member - where it will be preserved and cherished, instead of just getting tossed out by my executor when I die.  So I sold it, and the person who got it is ecstatic.  I posted a message on the Sands family genealogy site about it, and that generated some interest.  You have to be a bit creative.  Ya gotta put some effort into it!

And it worked better than "For sale, old shoe, best offer".

But beyond questionable Presidential collectables and old shoes, I see the same thing done all the time with bigger ticket items, even cars.  "For sale, car, best offer" and they put one badly lit picture on there and wonder why they get no bids.

Or even in classified ads, Craigslist, or whatever.  People list a motorhome for sale - no make, model, year, mileage, or sometimes, even price.  And they wonder why no one calls.  Oh yea, they forgot to put in a phone number.

Some folks even take this further - going to the E.S.P. method of selling:

"I've been trying to sell my car for six months, now, but no takers!"

"Did you advertise it in the paper?  Craigslist?  Autotrader?  eBay?  Pennysaver?"

"Did you put a sign in the window?  Park it out by the road?"

"No, I don't want the hassle of people knocking on my door all the time."

"So how would anyone know it is for sale?"

"Well, I figure someone might ask me if I want to sell it, and I would sell it to them."

I am not kidding, this is an actual conversation I have had.  Perhaps you start to realize why my sympathy for people and their stupid-ass problems has evaporated over the years.  And as you might have guessed, he eventually goes to a car dealer one weekend to "trade it in", and the salesman bends him over the desk and they all take turns with him, until he comes home, eight hours later, tired and sore and driving a new SUV with only 72 more payments to make on it.

And this illustrates why, even after the great tax deductions are long gone, people still donate cars to charity.  They just can't be bothered to sell them.  For some reason, our bargaining genes have been bred out of us, in this country.  We are no longer a nation of merchants, but of passive consumers.  We have no haggling skills, no selling skills, not even any buying skills.  We are a nation of chumpsters.

The first person to come along selling a bag of horseshit has us by the balls.  All we can say is "how much?" and "Do you take plastic?"

And I see this all the time.  People want to sell their old car, but they "don't know how to do that."

Excuse me, you don't know how to sell a car?  Put a price on it, advertise it, wait for someone to show up with money, then sell it.  How hard is that?

Ah, but the FEAR.  They are afraid of "just giving away" a car worth a few grand, so they price it unrealistically, and it never sells.  Here's a clue:  You are better off pricing it $500 below market and making it go away than trying to get every last penny out of it and waiting a year.

Granted, eBay has made their interface a hassle to use - for anyone who is not well versed in computers.  It is busy and has lots of fine print and too many screens.  It is not like an empty box to upload text and a place to upload pictures.  But it it isn't impossible, either.

So you see old cars languish in garages or under a sheet in the back yard, because people are afraid to sell them, because the claim not to know how.

And why?  FEAR.  There is this palpable FEAR that they will sell the car and not get enough money for it, and then will be mocked by their friends.

And there is this FEAR that somehow a Nigerian scammer will rob them of all their money (Hint: Don't mess around with people mailing you cashier's checks and asking you to wire money for them).

And yea, you can make mistakes.  But you learn from mistakes.  And you are better off taking calculated risks and making mistakes - and learning - than taking no risks, no actions, and being a passive consumer your whole life.

And this is why a lot of old people end up just giving their cars away to "Jimmy, the nice man who washes and waxes it for me..."

Why is this important?  Well, the basic ability to acquire and dispose of your consumer goods is a basic part and parcel of your freedom.  We talk a lot in the abstract about freedom of speech and such, while not realizing that "Life, Liberty, and the Pursuit of Happiness" includes economic freedom as well.

Give someone the "freedom of speech" and a soapbox to stand on, and what is the first thing they will want to talk about?  Yup, taxes.  Freedom is not some abstract concept removed from economics - rather they are part and parcel of the same thing.   Freedom includes economic freedom and they cannot be separated from one another (the Chinese are trying this, but it will be their ultimate downfall).

Thus, it galls me that I see Americans turning more and more into passive consumers instead of players in the marketplace.  We are buyers, but never sellers.  We are consumers but never producers.  And this makes us vulnerable and subject to victimization.

And that is why, today, you see people talk about economics in terms of consumerism - how to best consume is what they believe is the best way to go.  Get a coupon, a rebate, a discount, or cash-back - after all, that is how you save money, right?

Not really.  Saving money means not spending it, and a discount is not income, but just a ruse played with prices of things.

It's pretty sad to me to see folks turned into cattle.  When all it takes is a small modicum of effort!
Newer Post Older Post Home