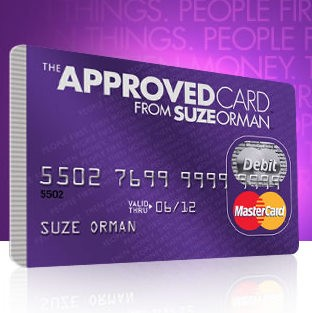 Having one of these in your wallet surely marks you as a total loser.  What's not to like?


I wrote before about prepaid credit/debit cards.  These are cards that charge pretty high fees to let you have what basically is a debit card without a bank account attached to it.  The fees sound pretty small, but cumulatively, they can add up to a lot, particularly to a person who is already short on money.

How do they work?   You put money on the card and then you can charge until the money runs out.  But there is usually a $3 fee to get the card, another fee to add money, another fee to check your balance, another fee if you go over your limit, and so on and so on.

What makes these a crappy deal is that the fees are higher than zero, and zero is what you would pay for a debit card from your credit union, or even big, bad, mean old Bank of America (why are they bad again?  For some reason, they never charge me any fees whatsoever, for a debit card, ATM card, checking account, whatever.  Zero.  Bubkis.  Nothing).   Even an intelligently obtained credit card with a low interest rate and low credit limit (like from Simmons First) is a better deal than a pre-paid debit card.

And yet, people go for bad economic deals, convinced they are worthy of little else.  And yet, the number of people living off the grid these days - people who do not use traditional banks - continues to rise.  For millions of Americans (and our legal and illegal immigrants) things like prepaid debit cards, Western Union moneygrams, and convenience store money orders continue to be used in lieu of regular banks.  And the reason for this is often psychological, not legal.  Many people - even people who are U.S. Citizens or are here legally, are convinced that banks are "not for them" but for someone else.  So they spend 2-3 times as much on these half-assed poverty financing deals.

The internationally acclaimed financial guru Suze "Sooze" Orman is at it again, offering a debit card to her loyal but misguided fans.  Sooze started out pretty straightforward, telling people to save more and spend less, but that sort of advice doesn't go over well with the people who run the media.   There is nothing to sell with such advice, is there?

So, before long, Sooze decided that advice like "buy a late model secondhand car and then keep it for a decade" was wrong and "lease a new Buick!" was right, particularly after the checks from Buick started clearing her bank account.

And of course, advice like "buying a boat can be a financial nightmare for the middle class" gave way to "Gee, those new SeaRay Sundancers are keen!" after SeaRay gave her a $300,000 boat.

Funny how that works, eh?

Well, the answer is, of course, is that it makes money for Ms. Orman.  And right there is the problem.  There is something odious and wrong about giving financial advice to people, ostentatiously to help them with their problems, when in fact you profit from the advice.  Ms. Orman no longer has clean motives here - but is motivated by her own greed to sell a debit card.

This is no better than the odious Glenn Beck telling people the world is going to end and then hawking gold to them - from a company that pays him.  Hey, Glenn, how's the end times working out?   How's your TeeVee show on Fox doing?  I thought so.

So, after a couple of days in the news with no blowback, a few financial page folks and a lot of bloggers are saying, "wait a minute, this is a crappy deal!  And this from the lady who claims to have your back?"

And prepaid debit cards are no real bargain for the poor - not when free alternatives are available.  What's next?  A chain of Suze Orman payday loan companies?  Their 300% interest loans are no worse than most payday loan places, so it can't be a ripoff, right?  And as Sooze says, sometimes its handy to have access to instant cash!

Just wait for it, it will happen.

Now, just to anticipate the naysayers, yes, it is possible to avoid most of the fees with this card, provided you set it up for automatic deposit.  And yea, there are a lot of people who are afraid of banks, and for some reason would rather dick around with this sort of poverty financing than go to a credit union or traditional bank.  But I am not sure either are good excuses for going to prepaid debit cards.

Like with airline miles cards, yes, it is possible to avoid paying interest by paying off the balance every month.  But people slip up and fail, and end up paying a lot.  And the same is true with these prepaid debit cards - you don't follow the rules to the letter, these fees kick in, and for the very poor, who might have a balance of $100 or so, three dollars a month is a lot of money.  A dollar just to see your balance is a lot of money.

And how is this better than paying cash?  I don't get it.

So, it comes as no surprise that she jumps on the bandwagon of celebrity pre-paid debit cards, on the heels of the Kardashian Sister's card (who exactly are they again?) only this time without the outrageous fees the Sisters tried.  Sooze is just content with the fees charged by, say, Wal-Mart, which are not outrageous, just rageous.

It is sad that so many people are desperately searching for financial advice, and that a whole industry of Suze Orman's and Dave Ramsey's have sprung up to cater to this demand.  But often the advice is poor if not just outright bad.

There are no financial secrets or tricks.  Just spend less than you make, and seek out the best, simplest, and least complicated deals.

Financial gurus are all pushing their own agendas - to their own benefit, not yours.  As soon as they ask for money, or tell you to give 10% to a church (that pays them to put on a seminar for parishioners) you have to quickly come to the conclusion that the only real advice they have is, "give me your money."