Why Everyone Is Smiling In Farmville (Anti-Social Networking) 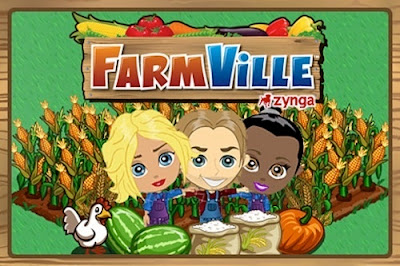 Big heads, big eyes.  Insipid.  What's not to like?
Don't you find this image a little creepy?

I would love to play Farmville, if it was like a real Farm.  I would make loans to my neighbors there, to improve their farms, and then foreclose on them, when their crops failed and they didn't pay up.  Before long, I'd own the damn place.  That would be a fun game!

That is, by the way, the reality of farming.  You see a few winners, and a lot of losers.  When times are good, farmers who are not very bright go out and buy expensive monster tractors.  They then laugh at their neighbors who are still using their "old equipment."  But a few years later, the weather is sour, the price of corn tanks, and the over-extended farmer goes bankrupt, and his thriftier, smarter neighbor buys that monster tractor from him at auction, for pennies on the dollar - and also takes all his land.   Who's laughing now?

But that is not the way things work in Farmville, where stray cows "wander" on to your farm, or people "find" fuel and things.  If only real farming was like this!  And everyone works together for the greater good.  Even the Amish are not this squeaky-clean.

Farmville is a faked-up version of life, where everyone is a pal, and no one has disagreements, no one wins, and no one loses.  It is like playing Monopoly forever, where everyone just keeps passing go, no one goes to jail, no one lands on Boardwalk, and everyone wins first prize in a beauty contest.

Social networking in general is like this.  You can "like" something, but you can't really "dislike" anything.  The "dislike" and "despise" buttons are sorely lacking, as is the "loathe" button.  As a result, the only thing you can do, is really agree with the group-think.

If someone posts something odious, what happens?  For example, a friends writes on your wall, "That O-BUM-A is a no-good!  He wasn't even born in the USA!"  Maybe you find that offensive.  What can you do?  Do you erase the posting?  Do you try to start a discourse with him on the subject?  What happens when your other friends start posting responses - and a fight breaks out?

Ahh.... un-friending, the only "dislike" button on Facebook, and like a lot of things on Facebook that are not positive, it is hidden, like an Easter Egg feature, making it hard to find.  Facebook allows you to un-friend people.   It allows you to BLOCK People from seeing your page.  But these features are not very prominently displayed on the user interface.  You have to hunt for them - because Facebook wants to keep everything facile and superficial.

Thus, what ends up happening on Facebook (and other social networking sites) is one of two things:

1. You and your friends keep the "conversations" at very, very superficial levels, like tweets, and never discuss anything of consequence, other than to "like" each others comments, "like" a brand of food or a restaurant or car, or ooh and aah over each others photos.  It is a superficial relationship - an arm's length friendship.  A long-distance friendship - if there ever was one.

2.  You end up gravitating toward people with similar views to your own, and no contrary views are ever presented.  The guy who hates Obama ends up with "friends" who all hate him, too.  He "likes" web sites and groups that also hate Obama, and never talks, discusses, or otherwise interacts with anyone of dissimilar viewpoints.  On the Left, you see the same thing - the Patchouli-stink hippies (and yea, they still exist) all talk to each other, finishing each others sentences and whining about how unfair life is.

And of course, for most people, Facebook ends up being a combination of 1 and 2 - they say very little of meaning, to people who already agree with everything they have to say.

And a result, the "conversation" that ensues is disturbing.  Everyone in your circle ends up agreeing with everyone else - or else not saying much other than general positive reinforcement of short messages.

The reality of relationships - in real life, that is - is that there is a down side as well as an up side.  Friends disagree.  There are misunderstandings.  Life ain't like Farmville.  People get angry, mad, upset or even go off the deep end.  That is part of humanity - it is part and parcel of being human.

Oh yea, people will be "outraged" as a group against an external target.  If you and all your friends "like" OWS then chances are, you all post things on each others walls about how awful the "1%" is.  It is a form of group-hate - the two-minutes hate - of an unseen and unknown external party or force.  And that makes it all the more creepier.  Hooray for our side!  Too bad for the other guy!

And it is very Orwellian.  We all park ourselves into little camps of followers, who then mega-ditto each other.  There is nothing to see in Facebook or other social networking sites, other than a huge mirror - often a fun-house mirror.  It is narcissism at its worst.  No wonder it is so popular, particularly with insecure people.

If you go on Facebook, you are instantly reinforced in everything you do.  You post a photo of you baking a cake, and immediately, five of your friends say, "Way to go!"  and "Great Cake!" and you have 10 "likes" on the photo.  You are a freaking genius!  And of course, you return the favor, "liking" and commenting on other people's photos and wall postings.  Everyone is clever and smart and good-looking.  Their pets are awesome and their children are above-average.

Suddenly, your Facebook friends might seem more warm, cuddly, and reinforcing than your real friends - or your real spouse.  Your spouse will tell you what-for, half the time, which is the chore of being a spouse.  No, you can't buy that Trans-Am.  Yes, you have to take out the garbage.  Welcome to real life!

But on Facebook, no one every says "No" to you, and not surprisingly, some are citing Facebook as a real detriment to real relationships - if not the cause of actual divorces.  People go online and hook up with someone.  That person never nags them, never corrects them, never clips their toenails in bed.  Suddenly, the virtual relationship looks a lot better than the actual one.

Of course, this is only until the person actually divorces their spouse and moves in with the online friend.  Suddenly, all that messy relationship stuff comes right back into focus.  But of course, the new couple can just go right back to Facebook again, and escape reality for a little while longer.  They become lotus-eaters.

Eventually, however, people start to get disoriented by Social Networking sites.  A cognitive dissonance sets in, as the person is actually leading two separate lives.  Online, they have this one life, where everything is sunshine and lollipops.  It never rains in Farmville, except perhaps at night.   No one argues on Facebook, at least not for long.  Everyone "Likes" and no one "Dislikes".  All is harmony and union.  Meanwhile, in messy real life, things are not so sweet.  The kid got in trouble in school again (his teacher "disliked" him) and the boss is a jerk at work.  And the wife is whining about the broken washing machine, again.  Your Farmville farm is beckoning - a perpetual sunshine place where everyone is happy, and you can just "find" stray cows and fuel on your farm.

The lure is very strong.

But eventually, something has to snap.  And for me, it didn't take long, perhaps mostly because I don't like fake saccharine kind of things, where people pretend to be your friend, when, the moment you leave the room, they say the nastiest things about you (alas, this seems too, to be part of the human condition).  It just felt like, well, High School all over again, where everyone desperately wants to be "liked" (interesting term) and accepted into a group.

And you know what?  I hated high school.  I graduated and never looked back.  And I didn't want to perpetuate it, through Facebook.

But, I am in the minority on this - clearly.  There are a lot of folks out there who want to relive High School, either by recreating it in their adult lives (at college, at work, with family, through social networking) or through media that glorifies the high school years - which, let's face it, is so much of the media these days.

But eventually, we all have to live in the real world.  And I think that is one reason why all these social networking sites - from Second Life, to Friendster, to MySpace, end up dropping by the wayside, eventually.  Eventually, everyone starts to want to "dislike" something.
Newer Post Older Post Home