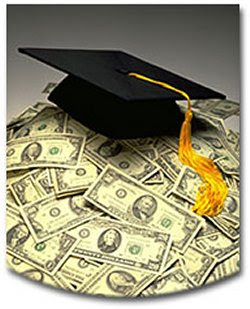 
One of the problems with the economy today - indeed worldwide - is youth unemployment.  Many parents are now facing financial struggle - facing their retirement years with a mortgage, debts, and little saved for retirement, as they helped pay the staggering costs of a college education for their kids.

And the kids?  Graduating with tens of thousands of dollars in debt, and no job to pay it off.  It seemed like a swell scheme, too.  Mom and Dad insisted that Junior go to college - after all, they were not "white trash" people, but middle-class sophisticates, and in their status-group, children go to college.

And the college education was a guarantee of a high-paying job in their minds, because, according to statistics, college graduates earn more!  Or, at least they did, for the people who graduated from college in the 1970's, 1980's, and perhaps 1990's.

I wonder, though, if you charted the delta on this, over time, if it would not in fact be declining.  And I think one reason is, that as more people go to college, college loses its cache and elite status.  It is like taking an airplane, putting in all coach seats and then saying it is "All First Class" seating.  You can't have first class without a coach to compare it to.

So we end up with a lot of unemployed kids looking for "clean" salary jobs where you work in a cubicle, and such jobs are evaporating quickly, as automation replaced a lot of these jobs - just as computers replaced the armies of accountants with adding machines and secretaries with IBM selectrics.  There is a reason that PanAm had its own office building in New York - as did GM, Chrysler, and every other major company.  These were human computers, basically, and nowadays, simple PCs handle most of these tasks.

Today, the trend is accelerating, and many cushy mid-level management jobs are going away, as they had no real function, and in fact, often decreased productivity, not increased it.

Meanwhile there are jobs going unfilled, often involving technical skills.  But college graduates are not trained with these skills, and their parents would be horrified if their kids took such jobs.  Getting your hands dirty is still viewed as a lower-class activity.

I went through this myself.  I was accepted at General Motors Institute in 1978.  It was a five-year Engineering program that required you complete a thesis to graduate.  In the Engineering community, it was well-respected.  And since you spent half your time working in a GM factory, it was an accelerated education that you cannot get anywhere else.

While most of my friends were doing bong-hits in the dorm and studying for their American Lit test, I was in a forge plant, learning firsthand what it is like to wrestle a white-hot telephone pole of steel into a machine, along with five other sweaty men.  Or I was programming a computer - not to play a game, but to do real work.  Or I was inspecting steel in the metallurgical lab,  and learning metallurgy firsthand.  Or learning how to run any number of machine tools - lathes, mills, etc. or to program the then-new "NC" equipment.  Or learning how to weld.  Or even, in one assignment, drawing up contracts for construction projects around the plant.  I learned more there in a few years than most do in the first ten years of work.

And yet, my Mother was horrified.  "You are going to a Trade School"  she would say in one of her drunken tirades.  No doubt she was embarrassed when she was at the club, and the other parents started talking about how Buffy was accepted at Vassar.    But she's dead now, and I have a job.

And many of the Liberal Arts majors struggled to find jobs after graduation - and often end up in other fields.  Indeed, my Mother never made much use of her education, either.

Education for education's sake is a fine thing.  But when it costs tens of thousands of dollars and leads nowhere, well, you can study the "great authors" on your own time at the local library for a lot less money.

A lot of my friends from that era are now working in various fields.  Some ended up starting their own businesses - often because they ended up taking low-wage jobs and working their way up in the field.  After college, Fred cannot get a job in his field, so he gets a job as a waiter.  Today, he runs a restaurant.  Sam did odd carpentry jobs after college, as he could not find a job based on his communications degree.  Today he does fine carpentry and cabinet work - and enjoys working with his hands.  Perhaps his parents are horrified by this.  But Sam has to live his own life - not theirs.

Status makes us do weird things.  Expensive things.  Wasteful things.  And one thing we are seeing today is this insistence by many folks, that their kids go to college at all costs, regardless of whether it will bankrupt the parents in retirement, or start out the kid in life with a mountain of debt.

And for the most part, this is due to status, more than anything else.  Because people feel their their children are "cut out" for a certain standard of living, and that college is the path to that standard of living.

Perhaps.  Perhaps not.  Perhaps that was true in the past.  But I am not so sure it is true today.  When everyone goes to college, then not everyone will make more money - or make it worthwhile.  It is like good old Huey Long, and his promise to make "Every Man a King!"  That never works out.
Newer Post Older Post Home