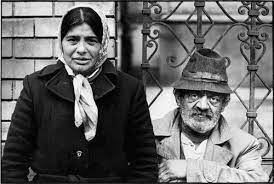 Why do we allow our society to exploit the poor?  Why do we stand for this?

Shouldn't we protect the interests of people who are not smart enough or powerful enough to protect their own?  Isn't that sort of the definition of civilization?

Decades ago, when I lived in a poor neighborhood and worked at various odd jobs, such as Pizza Delivery Driver and Teamster, there was a couple a few doors down from me who befriended me.  They were nice people and all, but, let's face it, they were dumb as posts.

I don't mean that in a mean way - it is just a statement of fact.   They were gentle and decent people, who worked hard and did what they were told to do, but were just not very bright.

The husband was semi-retired.  He had served in the Navy, working on a supply ship.  Even the Navy recognized that he would probably best work out in a position where there was not a lot of stress and simple, defined duties.  Think Forest Gump.

After the Navy, he worked as a custodian at the local church and received a modest pension and Social Security.   His wife never worked outside the home, but was a fastidious housekeeper, and kept herself busy with many crafts projects.

They never hurt anyone.  They never were belligerent, or stole things or were loud or obnoxious.   They were a cute couple, clearly in love with one another, but more than a little baffled and confused by the complex world at large.

And interestingly enough, they had developed a bit of a support network through their church.  When his car broke down, a car salesman at the local car dealer found him a reliable Chevy Nova to drive, at a reasonable price.

I often think of them.  And I am sure both are long dead, now.  They lived very simple, dignified lives, and although they were not rocket scientists, they never harmed anyone, never asked for more out of life than they earned, never asked for handouts, welfare, or special treatment.   All they wanted to do was work for a living, and live and enjoy life.

Doesn't sound like a lot to ask for, does it?

I rail on a lot here about how the poor today often victimize themselves with raw deals - payday loans, buy-here-pay-here used cars, lottery tickets, gambling, pawn shops, title loans, high-interest credit cards - the list goes on and on.

The poor are often victims of their own poor choices - in both senses of the word.  Without proper financial acumen, many folks - including middle-class and even upper-middle-class people, end up making very, very bad choices.

My friends from down the block at least had a support network through their church (apparently not one of those hatey-kind of religions) and thus had someone to look out for them, and steer them away from bad bargains.

But also, back then, in 1982, we didn't have payday loans, title pawn places, rent-to-own furniture, buy-here-pay-here used cars, lottery tickets - and all the other bad bargains for the poor we have today.

What changed?  Well, back then, a lot of that shit was illegal.  You could not charge 30% interest on a loan - you would go to jail for usury.  During the high inflation times of the late 1970's, such laws were modified or overturned.  In recent years, they have been tossed out, entirely.

The logic, we are told, is that government has no business regulating private transactions.  That business is business, and everyone knows what is and is not a good deal - and no one should spoil the party by making high-interest loans and other rip-offs illegal.

So, you can basically do whatever you want to the poor nowadays, and get away with it.  It's all perfectly legal.  And moreover, morally, we seem to have no qualms about it, either.

And while the church protected my friends back then, today, new churches and new religions have jumped on the bandwagon of exploiting the poor - often asking for 10% of pre-tax income, plus other special tithing.  If they try to protect their parishioners from bad financial deals at all (by hiring Dave Ramsey to give a seminar, for example) it is only done so out of a need to cut out the competition - the Holy Roller End-Times Cathedral doesn't want you giving money to VISA, but to them.

Maybe this is the new era we live in.  Maybe this is the way things should be or are going to be.  Maybe it can't be changed.  After all, a simple consumer protection bureau was shot down by the GOP on the grounds that it "stifled business".

Or maybe it can be changed - before we end up like Mexico, with all the wealth in the hands of a few and go fuck yourself, buddy.  The wealthy and even moderately wealthy, living in walled compounds, and in perpetual fear of their own fellow citizens, as well as armed criminal gangs, who have nothing, and thus nothing to lose.

We need to think carefully about our future and where we want this country to go.  If we let people - like my two friends - go down, we don't deserve to occupy space on this planet.
Newer Post Older Post Home