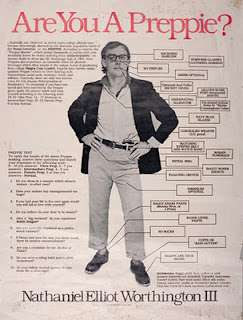 Tom Shadyac's greatest contribution to American culture was probably this Preppy poster.  He also directed some Jim Carey movies, which arguably is his greatest sin against American culture.
A reader recently told me about the movie  I Am which was made by the fellow who directed all those Jim Carey movies, Tom Shadyac.  He had an epiphany when he wiped out on his mountain bike (sans helmet) and had a severe head injury.  He gave away all the money he made and set out on a spiritual journey to figure out the meaning of life and what we are doing on this planet.

Perhaps he felt he should atone for directing all those Jim Cary movies.

The movie is interesting for the first half-hour or so, in that it discusses the innate parts of our human nature - to Compete and to Cooperate, and how perhaps in Western society, competition has started to edge out cooperation.

The second half of the movie, however, is buzz-kill, as he starts to go off the deep end with fake science theories, such as "noetic science" and the "heartmath institute" - the latter of which appears to be saying that the heart is a thinking organ (and not just muscle tissue) and moreover can predict the future!  If so, then my heart should be buying lottery tickets.

But overall, the first half of the movie was interesting, and one of the interesting parts was how Shadyac, when he became successful, found little comfort in owning lots of houses, fancy cars, and the like.

As one of the interviewees points out, once your basic needs in life are satisfied, you are generally happy.   You have a roof over your head, food in your belly, and clothes on your back.  Maybe a little companionship and sex thrown in.  Happy.  But having twice, three times, or 100 times as much food, or house, or clothes or sex doesn't make you twice, three times, or 100 times as happy.  And surveys have shown, again and again, that very wealthy people are often not very happy ones.

And my experiences growing up in wealthy communities verifies this - the very rich are often very unhappy, and their children are often in fact, miserable.

The other interesting aspect of the movie is his theories about Competition versus Cooperation.  He makes some good points here, but again, like "noetic science" I am not sure I go along with drinking the Kool-Aid, at least entirely.

Shadyac engages in the popular sport of America-bashing, or at least Western Culture-bashing here, arguing that somehow, we Westerners have gone off the deep end by embracing Competition over Cooperation, to the point where it is tearing down our society.

While I think he has a point, I am not sure this sin is limited to the West, but in fact is embraced by people of all nations.  Folks in America - particularly Hollywood - love to embrace far-off religions as being more holistic, cooperative, or pure, without really understanding how they work, how they are organized, or how very much like Western religions they are.

For example, I have written before about the Dali Lama - who many folks think is this peace-nik hippie dude who is all love and daisies - after all, he wears a robe, right?  But in reality, he and his brother are both CIA agents who are on the U.S. Government payroll and have been training Monks in terrorist tactics at CIA-run training camps.  Betcha didn't see that one coming, eh?  And don't get me started on Mother Theresa.

Are we really evil people who triumph competition over cooperation?  Perhaps, but I think this is a trend - and an ongoing one - that has plagued the world since we first fell out of trees.  Competition and Cooperation are the Ying and Yang of our psyches, it seems.  And I am not sure that mankind can have one without the other.

Cooperation is what makes people work together toward common goals - to achieve great things, like building pyramids or landing on the moon.  Competition is what often encourages people to achieve such communal goals.  And the pyramids are a great example of both.  For many years, people assumed these were built with slave labor.  But in fact, groups of workers would take turns building parts of the pyramids, in teams, as a communal effort and to show respect for their Pharaoh.  And these teams would compete against each other to see who could move the most stone or whatever.

In a way, it is like the sports teams of today.  They cooperate, within the team, to achieve a common goal.  But they compete - against the other teams - to win the championship.  And even when competing against each other, they cooperate - agreeing on a common set of rules, referees, rules enforcement, and the like.  Even the Superbowl is not unbridled competition, but rather a delicate ballet of cooperation withing a strict set of agreed-upon guidelines.

If it weren't, there would be no game, no championship.  If there was no cooperation or agreed-upon rules of the game, it would devolve into anarchy.  And ironically, some of the young people today think that anarchy is the solution - and not the problem.

And the same is true - or used to be true - within our capitalistic marketplace.  We competed within the marketplace fiercely, but had also a set of established rules for competition.  You didn't sell stocks for companies that didn't exist - that would be fraud.  You didn't cook the books and deceive investors.  You didn't cheat, in essence, because when people cheated, it took down the entire structure of the game, hurting all the players.  There had to be an agreed-upon set of rules.

Various reforms in our economic system have occurred through the ages when events occurred that hurt the competitive market.  Competitors came together to agree on Marquis of Queensberry rules of competition.   The Federal Reserve was established, right here on Jekyll Island, after J.P. Morgan got tired of (yet again) bailing out the markets after each speculative bubble and crash.  In the 1930's, many banking reforms were enacted (which my Grandfather, Platt Kissam Wiggins, had a hand in) to prevent the abuses of the roaring 20's from happening again.

Today, we are seeing calls for new regulations - in the credit card industry, in the home mortgage industry, in the student loan industry - to curtail abuses.  And while some in these industries decry these regulations as onerous or unnecessary, it really is in their best interests to see some sort of rational regulation applied.  After all, the alternative is that people stop borrowing money, simply because the instruments are too toxic and the industries are not trusted.

Establishing trust again, and eliminating Fear are useful goals, even for competitive industries.

But one thing I think that is disturbing, is the long-term trend to co-opt cooperation with competition - disguising raw competition with the trappings of cooperation.  We see this all the time on the Internet - where sites are faked up with phoney "user reviews" on goods and services, to pitch the idea that some odious financial transaction is, in fact, a good deal.

The credit card companies, we are told, are our friends, with our best interests at heart - offering us cash back and free bonus miles!  The car leasing companies are offering to help us - by cutting the cost of owning a car!  We are deceived and tricked into thinking that brutal competition is in fact, gentle cooperation.

And if you have any misconceptions about this, try being a day late with your credit card payment, or bring back a leased car with 5 miles over the agreed-upon limits or a tiny scratch in the door.   You will realize very quickly that these people are not your friends.  They morph from Hello Kitty to a Cujo in a heartbeat.

However, the idea that somehow we can morph from Competition to Cooperation is, I think, a bit naive.  Both are part of our nature.  And in societies based on Cooperation, Competition always rears its ugly head, whether it is a hippie commune, an Amish farm community, or a Socialist Republic.  Somehow, the same-old, same-old starts up, once one fellow decides that things ain't right and he should be in charge.

One other aspect of the film that was interesting was Shadyac's observation about how our society promotes the individual over the group - how we live alone, in modern society, rather than in cooperative groups.  While this is a valid point, again, I think both types of living - as an individual and as part of a larger group - are part of our human nature and are, in fact, essential to survival of the species.

And as our society has become industrialized, the concept of living in tightly-knit family-based communities has largely fallen by the wayside.  Economic opportunity is located all over the globe today - you can't wait for it to come to Squirrel Hollow where you were born.  Of course, perhaps the Internet is changing this.  And perhaps that is why Social Networking sites like Facebook are so popular - they allow people to form communities online, to work in cooperation.  But I guess, too, they allow people to cyber-bully each other as well.

Regardless, the individual often achieves, on his own, in an area where the group shies away.   The fabled silicon-valley garage start-up is an example of individual achievement, while corporate organizations such as IBM, an example of group-think.  And over time, the garage start-up ends up supplanting the old organization and becomes the new group-think.  Apple is the new IBM, basically.

There is validity and safety in herd-thinking, but herd-thinking usually results only in ameliorating losses, not in making real gains.  By grouping into a herd, the herd insures that only the old and lame stragglers are picked off by predators, while the majority of the herd stays safe.  A good plan, but cold comfort for the old and lame.

And as I have noted before, herds can be stampeded into doing really dumb things - like running off a cliff - which is how the Indians slaughtered buffaloes by the hundreds, before they were shown more efficient ways by the white man.  Herds can also be lead to the slaughterhouse.

And that is why I say it is a good idea to shy away from conspiracy theories.  Nothing there but trampled-down grass and poop.

I am not so sure I could recommend this movie, because to of the flaky quasi-science that surrounds the second half.  A guy with a self-anointed degree in noetic science, standing in front of a rack of broken irrelevant electronics doesn't really impress me that much.  But then again, it is that pesky actually knowing something that always gets in the way of fun.  You can't pull that Hoo-Doo shit on an Electrical Engineer.  Sorry.

But I think it is a good thing that Shadyac is at least trying to atone for Bruce Almighty.  It's about time....
Newer Post Older Post Home