What the Heck Happened to Wal-Mart? 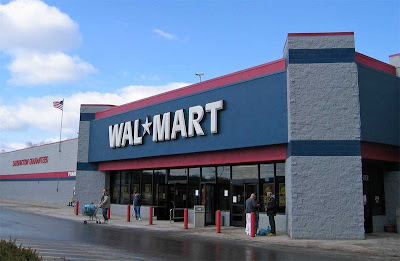 Wal-Mart has lost its way since Sam Walton died.  During the recession of 2009, they moved from "always the low price, always" to "Live Better" and started selling more upscale products at very good prices.  They were going after the Target shoppers, and it was working.

Then something happened.  The bottom-feeders who shopped there all fled for the Dollar Store, Dollar Tree, Family Dollar, and Dollar General.  These are the people who buy utter crap, so long as it is cheap.   It doesn't matter if the stuff is broken before you can get it out to the car - they don't care, price is king.

These are the people who buy shoes with cardboard soles, convinced they are "bargain" at half the price of real shoes, not realizing that they won't last even one quarter as long.

So, Wal-Mart dumped the "Live Better" promotion and put the cheapest Chinese-made crapola back on the shelves.  And the prices?  Not really all that great.  As I illustrated in two recent tire shopping experiences, their prices on tires are mediocre at best.  You can get a name-brand tire from The Tire Rack online for less than what they would charge for a set of Wang Ding Radials.

What's the point of going?  The store is dirty, there is merchandise scattered all over.  It looks more like a hoarder's house than a real retail store.  And the selection of goods is, well, very limited.

It is very sad, as they really were on to something.  But it seems they want to cater to the lowest common denominator crowd, rather than compete with real retailers.

And the prices?  Well for some reason, they have decided to sell crap and than jack the prices.  I went looking for a cheap poster frame the other day, to frame a glaze chart for the pottery studio.  $16.99 was the cheapest they had.  I was a bit surprised, frankly.

I'm afraid there are no bargains to be had at Wal-Mart.  If you want a big-screen TV, there are better prices at the wholesale club (not Sam's club, a real one).   And if you want tires or other auto parts, you likewise can do better elsewhere.

It just isn't worth going, which is why we stopped going, about a year ago.

Maybe time to unload the stock?  It still pays a dividend, but the Walton children haven't done much for the stock price.

UPDATE:  Walmart is struggling to compete in an ever-changing world, but is hardly ready to go out of business.   Their online presence is getting better, but the focus on brand names is something I am less than happy about.  Trying to get their "woven wheat" crackers is like going on a treasure hunt.   Store brands are harder and harder to come by, national brands are pushing them out.  See my posting about this.

As for our local Walmart, it has gotten better, although the local "Ghetto Gourmet" (neighborhood market) is a more pleasant place to shop.
Newer Post Older Post Home