The Town Clerk Who Wasn't 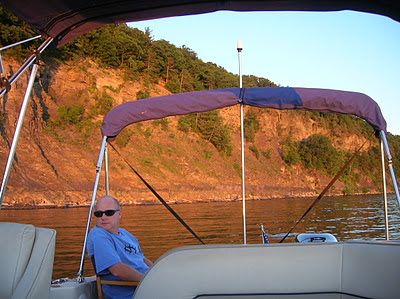 Central New York can be beautiful in the summer months.
But the place is so political that it kind of is a buzz-kill.


We recently sold our home in Central New York, on Cayuga Lake.  It was located in the Town of Ledyard, in Cayuga County, a very economically depressed area.  The town recently made the news when the town clerk refused to sign the marriage license of two Lesbians, supposedly for religious reasons.  And she ran for office again, and was re-elected.   You'd think if she objected to the duties involved, she would step down.

To me, this makes no sense.  It would be like a Hindu applying for a job with the USDA as a Meat Inspector, and then insisting that they not be required to inspect meat  - as it violated their religious beliefs!  But that is the nonsense we deal with today - everyone has rights, and no one has responsibilities.

When you read a news story that you know the details about, it is interesting.  I knew this lady - she was our town clerk, and we met her on numerous occasions, and joked with her.  She even asked me about trademark issues for her cheese business.  I felt like this was a nice person.  Who knew she was seething with resentment the whole time?

Or was she?  I have no way of knowing.  Funny thing is, though, in retrospect, when we went to get our building permit, there was always some reason why the assistant town clerk had to help us, not her.  And when we sold the house, and needed a copy of the Certificate of Occupancy for the bank, she claimed it was not on file and had never been issued.  Then she claimed she could not find the file.

A day before closing, we called, and she said she was "too busy" to look for it.  We drove there, pulled open the file cabinet, and right there in front was our file.  It took two seconds to locate this "lost file" that she was "too busy" to find - and which would have delayed our closing by a week or more!

Were her religious beliefs behind this as well?  At least subliminally?  Or was she just a crappy town clerk?  I am beginning to think both.  And the problem with scenarios like this, is that you can get paranoid about them, as you start second-guessing other people's motives.  You start to understand how minorities feel.

It is like that bit from Annie Hall, where Woody Allen gets paranoid that his friends are making subliminal anti-Semitic statements:

Oddly enough, while the farming communities there are fairly conservative, New York is clearly a "Blue State" and moreover, the local village of Aurora is something a little short of a Socialist Paradise.  It is full of left-wing crackpots, who also hated us for being "too conservative".  Between the "Rush is Right!" Republicans and the Looney-Leftists, we did not feel we fit in very well.  People in Ledyard would glare at you for being too Liberal, and folks in Aurora would burn you in effigy (I am not exaggerating) for being too Conservative.

Some lady came to town and spent a ton of her own money donating to the local failing college and fixing up the historic buildings.  Out of her own pocket!   She lost millions!  And yet the looney leftists hated her, claiming she was somehow "making a profit" on donating money to the college.  They hung her in effigy and to this day, maintain a website with all sorts of nasty stuff about her and how rotten she was.

She finally left town, but they still hated her - and then they focused their hatred on each other - starting fights over the smallest thing.  One poor lady who ran a wine and cheese shop was threatened because she was carrying the town clerk's cheese for a while.  It was not a big seller and she stopped carrying it months before - but that was not enough to stop the "boycott"!

The freaking place was a madhouse.  And a bummer as well.  We sold the house and got the heck out.  It was not a fun, inviting place to live.  I would not recommend living in the Festering Hell-Hole that is Central New York.

Just down the road was Ithaca, New York, home of the ultra-looney left.   Here, you see people driving $40,000 Volvos with 4-foot-wide bumper stickers (where do you buy these?) saying, "Fight For A Living Wage!"  Irony is lost on these folks.

But the problems in Central New York mirror those across the country.  People today wear their political opinions - and their religions, which are often indistinguishable - on their sleeves.  Everything - and I mean EVERYTHING - is viewed through the polarizing filter of politics.

You say, "Good Day" to a Liberal, and they reply, "How can it be a good day, with global warming ruining the environment - you destroyer of nature!" And then they spit on you and set fire to your SUV.

Or you say "Good Day" to a Conservative, and they reply, "How can it be a good day with a SOCIALIST  in the White House, creating a welfare state and bankrupting our country!"

And usually, these wild opinions are not based on fact, but fantasies.  As I have tried to point out again and again, most of this stuff, you can look up online and debunk.  50,000,000 people on welfare?  I don't think so.  Big Macs deforesting the Amazon?  Guess again.

And even political leaders buy into this stuff - and spread it further.  The Republican response to the State of the Union address (why do we have to have "responses" to these again?  We didn't when I was a kid!) put out the specious statistic that Steve Jobs created more Jobs than the Stimulus Package.  Turns out, that is not even close - 64,000 jobs versus 1.4 Million, it is no contest!

We used to call that "Lying" but today, no one dare say that.  And the idiot who said that, doesn't even say "I'm sorry I lied."

And moreover, he fails to understand that anyone with half a brain figures out he lied and then it discredits the rest of his message - which may have had some salient points.

But what am I saying?  People today argue with me that Payday Loans are a good deal, and hey, leasing a car makes sense!  So they believe whatever the TeeVee says, and if a politician says the Negro President is no good, well, they believe it, particularly if they hate Negros, which many do.

So what is the reality of all this political bullshit?

Well, first of all,  there is no big difference in policy decisions between Democrats and Republicans.  If you think Obama's policies on Iraq, Afghanistan, and Gitmo are any different than Bush's, you'd better guess again - as he has done mostly the same things that Bush did - and on Bush's announced timetable.

Fiscally, they are little different, other than Bush cut the very wealthiest people's taxes by 2%.  And yet, in this world of "believe whatever you want, that makes it true!" people making $30,000 a year tell me that "Bush cut my taxes!"

The only difference between the two, it seems, is which side they choose on these divisive, manufactured, wedge-like "social issues".

So what's the answer here?  We need to calm down, people!

Someone isn't "evil" because they drive a Hummer - just perhaps making poor choices.  But that is no reason to set fire to it.

And if you are elected Town Clerk, you have to do the duties of Town Clerk - even if that means signing some Lesbian Marriage License.  How does that on earth hurt you?  No one is asking you to officiate at the wedding - all you have to do is sign a piece of paper.  Sheesh!  You ain't going to Hell over that.

We have become a nation of extremists - extremists over NOTHING of consequence.

The reality is, of course, that a large number of us are not extremists - the majority, in fact.  And we are starting to get pissed off that the media gives such attention to such loud minorities of extreme political views, as they are "newsworthy" and get people to watch - and get them all riled up, as well.

But eventually, one tires of being in a state of perpetual outrage.  And one tires of the forwarded e-mails from the "true believers" replete with truths, half-truths, and outright lies (usually the latter, followed by, "The MSM never reports THIS!!").