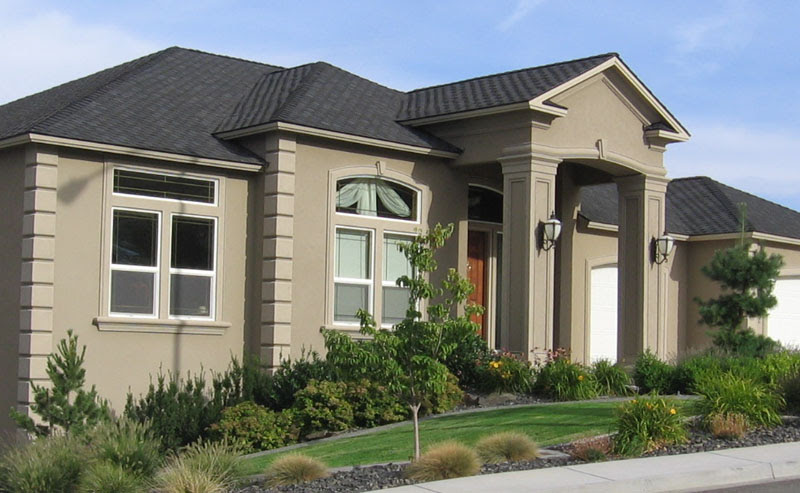 A house like this might look expensive from a distance, but that is just the miracle of Dry-Vit, the developer's friend.  On closer examination, if you know what to look for, you might realize that while this is a large home, it was built on a fairly modest budget.


I first noticed Dry-Vit when I was walking by a storefront in Old Town Alexandria, Virginia.  A contractor was working on the place, and he turned it from a drab old rundown 1950's exterior into a modern storefront, complete with stone-looking columns and fascia.  He had three Mexicans and several buckets of Dry-Vit brand synthetic stucco.

As an Engineer, I was fascinated.  In about a day, he had turned the store from a dump to a palace - and it looked like it was made of stone from George Washington's time.  OK, well, maybe not on close examination.  But it was cool, nevertheless.

What is Dry-Vit?  It is a stucco-like material that can make the exterior of a building look like anything from stucco to sandstone.  It looks expensive and upscale, but it usually isn't.   In fact, it is a fairly cheap way to cover a building, and if done properly, can be very long lasting.

If not done properly?  Well, it peels off in sheets, as happened to a friend of mine who bought a condo in Crystal City, Virginia.  If the surface prep isn't done right, it all comes off in short order, and you end up with a very expensive repair, and possibly water ingress and mold issues.  The foam underlayment may also be susceptible to termites.

Usually, the material is installed over foam - either exterior insulation Styrofoam sheets applied to the outside of the house, or so-called "Architectural Foam" used in many commercial buildings.  The latter is often the fancy "stone" cornices, columns, and decorative trim you see on office buildings and condo high-rises these days.  It looks expensive - like stone - when it is first built, but since it is basically foam, it sometimes doesn't last long.  Birds can peck at it and make nests in the holes - as has happened to a friend of mine who bought a condo in Florida.  Storms literally blow off the trim and land it in the street (at least in South Florida, after a good Hurricane).   And the foam insulation can wick up water into the house, causing rot, if not properly caulked or landscaped.

Is this a bad material?  Not really - if installed properly.  But the problem with it is than when first complete, it does look like a million dollars - or at least a million dollar home.  And many people over-pay for cracker-box houses that are styled like Jed Clampett's house, but are not real mansions - based on this external appearance.  In fact, you might say Dry-Vit (and its competing products) were one of the causes of the housing meltdown - as people overpaid for houses that looked expensive but actually weren't.

These are houses that are large in size, but often poorly insulated.  The windows are large and fancy, but are really just cheap vinyl windows - not that there is anything wrong with vinyl windows, just that I would not pay much for them.

In fact, a developer can take an old "dog" of a house, slather it with Dry-Vit, throw in some granite counter-tops and stainless steel appliances, some Travertine marble, and a garden tub, slather the inside with "knock-down" and have it come out looking like a mansion.  These before and after photos are a clear example of the idea.  You can update a house and improve its "curb appeal" for not a lot of money.

Again, this is not a bad product, but don't be confused by an exterior treatment into paying too much for a house.  While the house may look more expensive, in reality, it is just the same old house underneath, with just a few thousand dollars of Dry-Vit and some Mexican labor added.

If you are looking to "buy and flip" a house, then Dry-Vit is your friend.   Put Dry-Vit on an older home, and it will update and modernize the look, and make the house sell a lot faster.

If you are looking at a house that is covered with Dry-Vit, I would highly suggest getting a home inspector familiar with the material to go through it and look for examples of improper installation, caulking failure, water ingress, termite problems, and the like.  These are not problems unique to Dry-Vit, of course.  But these problems can hide themselves behind all that stucco, and not be noticed until years later, when costly repairs will be needed.

And if you are looking at such a house, don't be blown away by the luxurious appearance of the house.  Use a jaundiced eye and see if the stucco and stainless appliances are not in fact distracting you from the more plebeian "bones" of the place.  A tract home is a tract home, no matter how fancy it looks.  The fact that there are 100 more homes just like it in the development should tip you off that you are not buying something precious, unique, or expensive.

Developers love this stuff as it is easy to apply, and Mexicans, being familiar with stucco and concrete work from their home country, can put it up in short order.  You can build a home and make it look rich with materials like this.

That, and what I call the "Rich People's Roof" - the steep hip roofs used today on many of these mini-mansion developments.  They may look expensive, until you realize they are covered with 15-year shingles.  They will be expensive to re-roof, about 10 years down the road.

An example of a 'Rich People's Roof' this time on an actual rich person's house (note the use of real brick, not Dry-Vit) as well as more expensive windows.  Developers like to copy this type of roofline on less expensive homes, to make them appear to be more upscale.


We all like to claim we are not affected by status or the desire to appear more important than we are.  But the folks that sell houses and cars know better - they know that we want to have impressive goods that have the appearance of wealth, even if they are not all that expensive.  So they can put baubles and gimcracks onto consumer items, and we will pay extra for them.

Don't be fooled by the fascia.  Don't buy the sizzle.  Because a few years down the road, you may realize you overpaid for what appeared to be a fancy house, but what is in fact, a rather typical home, styled to look expensive.
Newer Post Older Post Home