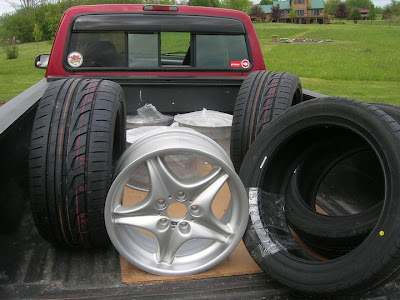 Tires are so freaking expensive these days that you can't afford to be blase about buying them.


A friend is looking for tires for his Mercedes.  It is a decade old with over 100,000 miles on the clock.  And since it is shod with P225/55 R16 prescription tires, the rubber ain't cheap.   Actually, tires aren't cheap period, anymore, as I noted in an earlier post.  The days of the $25 tire are long behind us.

The Tire rack has a plethora of tires for the car, from $82 to $200.  Which one to get?  Ironically, the most expensive tire, a Pirelli, has the shortest tread life rating - a lousy 180 - as it is a high-performance "sticky" tire designed for lateral grip (cornering) not service life.

By the way, it is tempting, if you are a boy-racer, to put sticky tires on your car and then drive it like a maniac.  The problem with this model is that the 4,000 lbs of car, being pushed against the suspension components, laterally at 1.0 G will break things - expensive things - in the suspension.  Ball joints and wheel bearings come to mind.  Horsing around with a street car can be fun and all, but it wears on the car fast, and since it was not designed for racing, it can also be dangerous.  Want a race car?  Build one and take it to the track.  But don't kid yourself that a street car is a "racing machine" and you are Speed Racer.  But I digress.....

We are fortunate in that in addition to price, we now have these tread-wear ratings to use in selecting tires.  Until these came along, you really were buying a pig-in-a-poke when it came to tires.  You could go by brand and price, but that was about it.  Some tires lasted longer that others, but you'd have no way of knowing ahead of time.

There is a trade-off between traction and tread-wear, usually.  The higher the traction, the lower the tread-wear.  Soft compound tires don't last long, and some racing slicks are so soft as to be actually sticky.  Oddly enough, though, this trade-off is not reflected in the tread-wear guides, as the traction portion of the rating is based on wet road performance.

The rating is referred to as the Uniform Tire Quality Grading Standards or UTQG rating.  This rating comprises a three digit number, usually in the range of 100 to 800, following by two letter designations, usually A's or B's.

The first part is the tread life rating.  The number is based on how long the tire lasts on a government mandated test course.  It is not an exact science, but a tire with a tread-wear rating of 200 should last twice as long as one rate for 100 - depending on a number of conditions, of course, including load, tire pressure, driving habits, temperature, road condition, etc.

From what I can see, most reasonable, non-performance tires rate at least 300, and many are well over 400.  A few top 600 or more.  Obviously, if tread-wear is your only criteria, you are looking for the higher number.

The first letter represents the traction grade, and ranges from highest to lowest, in four ranges: AA, A, B and C.  This letter represents the tire's ability to stop on wet pavement as measured under controlled conditions on specified government test surfaces of asphalt and concrete. The testing does not take into account cornering, hydroplaning or acceleration.

From what I can see, most tires are rated in the A category, a few AA, but very few are B and I have never seen a C listed.   This is most likely due to legal reasons - a C-rated tire would be worthless in the rain and kill people.   I think I would shy away from anything less than A.  Most tires are A and a few are AA.

The second letter is the temperature grade, which, from highest to lowest, includes A, B and C. These represent the tire's resistance to the generation of heat.  Again, very few I have seen are below A - maybe a few Bs, but that's it.   I have yet to see a "C" tire, but again, such a poorly made tire would likely create legal problems for its maker.

Most tires I've seen are rate A A or higher (AA A for example).  I see a few A B listings but not many.  Thus, this designation is less helpful, as most tires are A A or higher.  I would not buy a tire below A A if I could help it.

In terms of treadwear, I would look for 400 and higher, at least, if all you are looking for is a passenger car tire with long tread life.

And let's face it, with the price of tires these days, who can afford low-mileage sticky performance tires?  Spending over $1000 on a set of Pirellis that won't last 20,000 miles makes no sense unless you are racing.

So what does this mean?  Well the best tire value might not necessarily be the most expensive tire.   Consider these two tires from thetirerack.com:

The first tire is a good all-around touring tire with a staggering 740 AA treadwear rating and a modest price of $128 each.  For a passenger car used for going to and from work, this could be a tire that would provide many years of good service, and not surprisingly, it is warranted for 70,000 miles.

The Pirelli, on the other hand, is clearly a high-performance tire, and is rated with a very low 180 AA tread-wear rating.  Not surprisingly, it comes with a zero tread-life warranty.  This is a tire for serious performance - for people who don't mind swapping tires every 20,000 miles because they want sticky, dry pavement performance and extreme cornering.

Note that the wet-traction rating of both tires is the same - A.  High performance racing tires are often no better than passenger car tires when the rain comes - and are often worse.

But beyond comparing ultra-high-performance tires to street tires, the tread-wear ratings are illuminating when comparing to other passenger car tires.  For example, the various Michelins I found in this size, ranged from "no rating" to a maximum of 500.   Needless to say, they were far more expensive than the Bridgestones.

Are these tread-wear guides exact?  No.  As they say, "your mileage may vary".  You can ruin a new set of tires in an afternoon, if you put your mind to it.   Do a few burnouts and such, and you can burn the rubber right off them.  Hard cornering is going to wear on them as well.  The more gently you drive, the longer the tires are going to wear (and the car) and of course, the less likely you are to get into an accident or get a ticket.  (I pay $15 a month for car insurance.  I'd like to keep it that way!).

The Tire Rack site has a reviews section.  Like all on-line reviews, you have to take them with a grain of salt.  When someone posts that a new set of Michelins last only 10,000 miles, you know that either they are lying, they do burnouts, or their car has horrible alignment.  Even the crappiest tires will go 10,000 miles, unless they are bicycle tires.  So I would toss out reviews like that.

But I would take the time to research your tire purchase.  Just going to the local tire store and buying "whatever they have in stock" is not only going to be very expensive, but chances are, you may end up with a tire you don't like and doesn't last very long.  Price is only one aspect of a tire - tread-life and quality are the other side of the coin.

I am fortunate that now the X5 is re-shod, I am set for tires, at least for a few more years.  By the time I need another set, no doubt I will be in for an even greater "sticker shock" on tire prices!
Newer Post Older Post Home