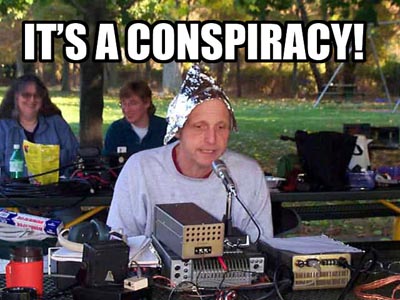 
First, a disclaimer.  I am part of the conspiracy.  I am a registered defense contractor.  I've done work for the "three letter agencies".  I just turned away work from an international arms dealer.  No, I'm not making any of that up.  But if you are stoned as you read this,  Bhuwawawawawa!  I love messing with people's minds.

And yea, I was at GM, where we killed the electric car and suppressed the 100 mpg carburetor.  Bhuwawawawawa!

And yea, I live in Jekyll Island - where the Federal Reserve was created!   Bhuwawawawawa!

God, I love that!   Did you see the expression on his face?  I think he peed his pants.

But do conspiracies exist?  Yes and No.  No is easier, so let's explore that first.

No, there are not conspiracies like in the Hollywood movies.  Everything in Hollywood movies is fake - and I should not have to even mention that, but some folks really think there is a computer vault at the CIA like in Mission Impossible or that GS-7 clerks live in swank row-houses in Georgetown.  Fake, Fake, Fake, Fake.  You'd be surprised at the crappy equipment the government has - all bought on lowest bid.

And disorganization!  The government couldn't conspire to send out for pizza.  Things are often so badly organized, and there are so many people involved in things, that nothing gets done.  And in most cases, this is a good thing.  Less government is often better government.

For example, many illegal aliens pay taxes.  How hard would it be to cross-check the records of the IRS and INS and deport people?  Not hard to do at all.  But there is no link between the two agencies.  Government is not as efficient as the movies make it out to be.  No, you can't just type someone's name into a computer in a government office and pull up a "dossier" on them.  That is fantasy, not reality.

Plus, the government is horrible at keeping secrets.  The most often uttered phrase in Washington is, "I'm not supposed to tell you this, but...."  I mean, plueeeze!  If there was a conspiracy to do anything, it would be found out in short order.  There are just too many people, too many leaks.  And we see it all the time.  Wiki-leaks is not some weird anomaly.  You can't have grand conspiracies with 50 or 100 people before someone squawks.  Shit, we couldn't even keep the Atomic Bomb a secret for more than a few months.

The people who believe in conspiracy theories rarely live in the DC area, and rarely have worked for government agencies.  They live in the sticks and get most of their data from the TeeVee and the Movies.  They think secret agents are like Tom Cruise, not Robert Hanssen.  Trust me, DC really is "Hollywood for Ugly People" - and not very bright people at that.  No, it is not your imagination, most Congressmen are not very bright.

I mean, the whole government is so Keystone Cops, it is amazing that anything gets done at all.  And trust me, this is a good thing.

Oh, by the way.  All that computer and science crap you see on shows like "CSI"?  Your local cop shop doesn't have any of that.  In fact, no one does.  It's television, people.  Stop watching that shit,  OK?  It is just made-up shit.  Really.  If you get offed by some mugger, they aren't going to go all science on your corpse and track down the bad guy.  In 3 out of 4 cases, the crime will be logged as "unsolved" and that's that.  Unless a family member whacks you, chances are, the cops aren't gonna catch your killer.  End of story.

Now for the Yes part.  Yes, things happen that are orchestrated, but informally.  Yes, a system has evolved over the years that is designed to take American Citizens and turn them into mild-mannered sheep, who will follow any trend that is out there.  To turn people into "consumers" who will run after any red flag you wave, just like a bull at a bullfight.

And we know this, because numerous books have been written about it.  The entire advertising business makes no secret of it.  Like professional wrestling, they will show you the secrets behind the stagecraft, and make no bones that what they are doing is rehearsed and fake.  All you have to do is ask and they will tell you.  Just read any back issue of Advertising Age.

But alas, not many bother to ask.  They prefer to watch the commercials and believe the cover story.

So no, the science behind modern marketing was not developed at a secret meeting of the Masons, but was sold to various companies by marketing types and consultants, and then implemented, over time.  Companies that did not manipulate their customers were forced to jump on the bandwagon, lest they be left behind. Companies that tried to play it straight with consumers often failed in the marketplace.

Of course, the end result of these types of informal conspiracies and the formal type that people believe occur (but rarely do, in real life) is often the same.  It matters little to the consumer whether the machinations of the Real Estate market in the last 10 years was the result of a grand orchestrated conspiracy, or just a conflagration of events and actions by a number of disparate parties (which is really what happened - the conspiracy of 330 million people).  The end result is the same - if you chose to buy an overpriced house at the height of the market and finance it with a funny loan, chances are, you got screwed.

It feels good to find a scapegoat - to blame someone else, an identifiable character or minority group.  And it don't get more minority than 1%.   So you blame them, not yourself, because it makes you feel good about yourself to go after a minority group.  Ask the Germans.

People who believe in conspiracy theories waste countless hours of their time whining about them.  How the aliens are being kept under wraps, or how 9/11 never happened (I was in DC at the time, trust me, it happened) or how Kennedy got shot.  All of that effort adds nothing to your personal life.  It makes you depressed.  It will drive away your spouse.  It will drive away your friends.  It will keep you from getting or keeping a job.  And it certainly isn't going to help you get ahead in life.

A better approach is to look at the world - unfairness and all - and rather than whine about how unfair it is (and it really isn't, at least in this very wealthy country) figure out instead how your actions will affect your own life.  The biggest conspiracy of all might be right between your ears.  Because it is your own brain that is racking up credit card debt, leasing new cars, and making other stupid financial decisions.

And guess what?  Hard-core conspiracy theorists are usually not very financially astute.  They are using their conspiracy theories to drown out thinking - so they don't have to examine closely their own actions and call them into account.  Just order another pizza and put it on the credit card.   When it all goes wrong, blame Ben Bernanke.

You have choices.  And how you make those choices will have a far greater impact on your life than the Trilateral Commission or the Federal Reserve, or whatever.

After all, how can some big government conspiracy steal money from you, if you are unemployed and smoking dope in your Mother's basement?  You mean to tell me that "but for" the grand conspiracy, you'd be a billionaire with a Ferrari?