Has the Daily Show Jumped the Shark? 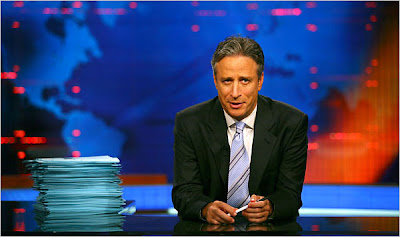 Success can be a curse.

The Daily Show used to be funny.  You can watch it, on the Internet, even if you don't have a television.  But funny thing, they no longer show it commercial-free.  And in fact, it is now just one long commercial and pretty much Daily-Show-Free.

The format is becoming pretty tired and rote.  First, there are at least 2-3 advertisements, and what the ads are for are telling.  Last night it was for a smart phone, a sexual lubricant, and an Irish Whiskey.  What does this say about the demographic of the audience?

But again, I am not in the market for smart phones, sexual lubricants, and trendy drinks.  That is the 18-35 demographic, and who the marketers are hoping to snare.  So the show isn't aimed at me, anyway.

The irony was, of course, that Stewart in that episode, went on a rant about ads above urinals, saying,  "I hate whoever the f*&% put this here!" - apparently oblivious to the saturation advertising on his own show, including product placements.

And yes, on his show, the ads are twice as loud as the commercials - apparently watching online gets around those pesky FCC regulations.

After his intro bit - which is the best part - in which he discusses the news of the day, he cuts to more commercials - the whiskey and sex lube again, and more smart phones, and then comes back with the comedy "sketches".  It starts to drag here, as some of the sketches are like the ones relegated to the latter half of Saturday Night Live.  You just think, "O.K., I get the premise, but please God, let this end!  It stopped being funny several minutes ago!"  The audience laughs nervously - they are tired of it as well.

If I made it that far, I usually turn it off before the next commercial.  Why?  Because the last half of the program is usually a huge product placement.  A "guest" comes on and talks about their new book, new movie, new video, or whatever.   And I presume they pay for these guest slots.   Last night was the worst - Charles Barkley, the basketball player, comes on to promote his new status as the spokesperson for a weight-loss plan.  Oddly enough, it didn't look like he had lost so much weight, so much as he wore a very large and loose suit.  I didn't bother watching this - what's the point of a 10 minute advertisement?

The humor, too, is starting to drag.  Stewart's staple, like so many talk-show hosts before him (Thank you very much, Johnny Carson!) is Gay Jokes.  Yes, Gays are still the Stepin-Fetchit of the humor business, and nothing garners laughs more than homosexual innuendo.  Of course, Stewart dresses it up in self-depreciating humor, implying, in the jokes, that he has same-sex attractions.  But that is just to make the humor more politically palatable.  So long as the joke is nominally about yourself it is deemed acceptable, even though the same joke, if told about others would be deemed offensive.

But I still think it is offensive, as Stewart is just putting on black-face here, pretending to be Gay, to get a laugh.  And in that regard, it is twice as offensive, not less so.

His other form of ethnic humor is Jewish jokes, which would be very offensive, if told by a gentile.  But the rule in the humor business these days seems to be that if you are Jewish (or even partially Jewish, like Louis C.K.) it is OK to tell these sorts of jokes.  It's like the rule about black people being allowed to use the "N-word."  It's funny if they do it, but offensive if a white person does.

I am not sure that ethnic humor was ever very funny - nor that stereotypes are less harmful when propagated by a person nominally of that ethnic group.  Both Amos 'n Andy and Stepin' Fetchit perpetuate negative stereotypes - it is not really helpful that the latter was actually black.

And of course, he resorts to swearing, which is the last refuge of the unfunny comedian.  Using the F-bomb (bleeped to protect your precious ears) is featured in nearly every bit he does - and usually gratuitously.  It is one way to make an unfunny joke appear funny.

Is he still funny?  Well, yea, he is a funny guy.   But increasingly, I am finding the payoff to be less and less for the hassle involved.  The numerous commercials are very annoying.  And a funny thing - if you try to mute them using the mute feature on your media player, when you try to turn the volume up once the ads are over, you can't hear a thing.   Is this by accident or by design?  I presume the latter, and it is an insult to the intelligence of the viewer.

All of this reminds me of why I gave up watching television in the first place.  Watching it on the Internet isn't any better, it seems, and perhaps worse.  The best solution is to not watch at all.
Newer Post Older Post Home