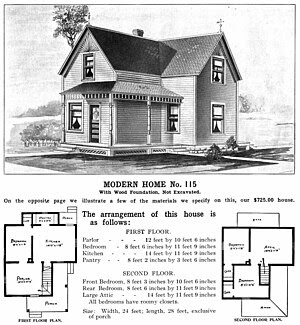 At one time in this country, you could buy a complete home as a kit from Sears, and then have shipped to you by railcar.  Today, we have gone back to "stick building" homes from raw lumber.  Mobile Homes (Manufactured Homes) and Modular Homes are becoming more popular, but face barriers to acceptance.  Why is this?
Note:  this posting is in response to a comment made by a reader.

A friend of mine in Central New York met with a company in Canada that sells "panelized" homes - homes that are build as prefabricated panels that are then assembled on-site in a short period of time and can be built inexpensively.  They were enthusiastic about the idea, and contacted a local contractor to assemble the home for them.

The bad news came:  The contractor wanted MORE to assemble the panelized home that he would have charged to built it from sticks of lumber.  Why is this?

Well, the simple answer is that the building trades are a bit of a guild, and the guild protects it own.  Houses are expensive to build, because the tradesmen have an unwritten agreement to make them expensive to build - and staggeringly expensive to remodel.  And once they start building your home, they  "have you" in terms of cost overrruns.  Only bulk home builders can rein in these sorts of costs by building 100 houses at a time.   For the solo homeowner, building your own home (paying someone to build it) is often a money-losing proposition.

My friend was disappointed.  In Central New York, it costs more to build a house than the resale value of the home.  If you have a house built, it will be worth less than you paid for it, for many years.  If you remodel a home there, you lose money as well.   We lost $100,000 when we sold our home in Central New York.  Owning a home is not all it is cracked up to be!

But what about mass production - the assembly line, the factory - the promise of cheap consumer goods for less?  Why haven't they been applied to housing?

The Sears houses of the turn-of-the-century are no longer available.  But the houses built from those kits were well made - and in fact often command a premium price today.  And they range from elegant Victorians with servants quarters to cozy craftsman-style bungalows.  How come we could do that in 1910 but not today?

The "manufactured home" market thrives today, but these types of homes are often limited in style and actually depreciate in value over time, unlike a conventional home.  Their heritage started in the trailer business - the types that were towed.  And indeed, many come equipped with a ball hitch at the front, three axles and taillights.  In some jurisdictions, their ability to be towed makes them exempt from certain zoning laws.  In some places, you have to keep a license plate on them, even if they never are moved.

But the trailer home has morphed into the double-wide and even triple-wide.   These are still looked down upon as lower-class housing, and while they are inexpensive to buy, they often wear out and again, depreciate like a car.

Modular housing is sort of the next step in manufactured homes, and many are built by trailer-home manufacturers, while others have more upscale origins.  Modular homes are made from a number of modules - as many as 6-10 - that are assembled onsite and often have characteristics that make them look "stick built" rather than manufactured.

However, since they comprise a number of long modules that can be trailered to the site, they tend to have odd features inside that give them away as modulars.   For example, one we looked at - a Victorian home, complete with turret and hydronic heating, had very thick walls where the modules joined together.  And in the basement, you could see the modular construction and how it worked.

Was it a bad house?  It did have cheap cabinets, cheap trim, and cheap carpet.   But those are optional items that can be upgraded.  The Real Estate Agent and the Bank both warned us that it was a modular home and made us sign a disclaimer, so we made it clear we knew it was modular.  I don't think it would have depreciated, like a trailer home, other than how the market has depreciated anyway.

We didn't buy the home, which turned out to be a blessing, as it was vastly overpriced.  But these sorts of modulars are popular in Central New York, where labor costs are high, and resale values on homes are low.

Even a well-built modular home has a stigma of trailerism about it - as evidenced by the disclaimer we were forced to sign before making an offer on that house.  There is a perception in the industry that a "stick built" home - even a tract home that is identical to 100 of its neighbors, and poorly built at that - is somehow "better" than a manufactured home.

And part of this was largely because most manufactured homes in years past used cheaper components.  Many used plastic (polybutylene) plumbing that would later break or explode under pressure.  Most used specific "mobile home" fittings - water heaters, furnaces, air conditioners, bath fixtrues - even doors and door knobs!  Some even had 2"x3" construction, and most used cheap paneling on the inside and cheap aluminum on the outside.  As a result, over time, a trailer home, like a RV, simply wears out, and people trade them in, like cars, for new ones.

Clearly, this sort of business model won't work, if manufactured housing is to go mainstream.

Some companies have attempted to "go upscale" with modular housing.  My parent's neighbor had a Nanticoke home build on a 5-acre parcel on the Chesapeake Bay.  It was at least seven modules and it was a spectacular house - or it would have been.

The contractor assembling the house decided to quit early to go fishing on a Friday, and left the roof off.  They put a plastic tarp over the house.   That weekend, it rained spectacularly, and the pre-finished hardwood floors, the oak trim, the pre-installed wallpaper - everything - was ruined.  They ended up gutting the shell and rebuilding it from scratch.

Say, you don't suppose that old Bubba sabotaged the deal from the get-go, so as to punish the Nanticoke people to "taking away jobs" from local carpenters, do you?

There are modular home builders who are still trying to work the concept.  But one further "barrier to entry" is zoning.

Zoning laws vary from State to State and even municipality to municipality.  As a result, a home that passes muster in one district may not get a Certificate of Occupancy in another.  And if you modify the design to pass muster in one place, that very modification may make it fail in some other.

And local zoning inspectors often are not well versed in modular design and may question some construction techniques which are sound, but that they are not familiar with.

And then there is plain old prejudice.  Local Town Boards may say, "We don't want a trailer park here!" and deny your permit to build a modular, on the grounds that it is a "trailer."

And indeed, even covenants on the property may limit you as well.   Our home in Central New York came with a covenant that a modular home could not be built on the property, even though most of the homes in the small lakeside development were indistinguishable from modular homes.   Indeed, a modular would have been a major upgrade for some of those lakeside camps.

But prejudices are hard to shake.

I think, moving forward, you will see more modular and pre-fabricated homes available on the market.  But one thing killing these products is the Real Estate Meltdown, which has driven demand down, as there are so many existing homes and foreclosures for sale - for cheap - right now.  Why build, when you can buy someone Else's nightmare for cheap?

So once again, the manufactured housing business faces a steep obstacle.

For many retirees, a form of manufactured home known as the Park Model - which is about the size of a one-bedroom apartment - makes a fine retirement or vacation home.  Park models are cheap, well-made, clean and neat, and often can be had with interesting design features.  Retirement communities which feature these units are low-cost, but safe, clean, and devoid of the "trailer trash" stigma that most "trailer parks" have.

I would gladly live in a Park Model, as I get older - it is less space to clean and maintain, and a lot less expense!

But in the meantime, modular or manufactured housing still seems to be facing an uphill battle to gain acceptance from the general population.
Newer Post Older Post Home