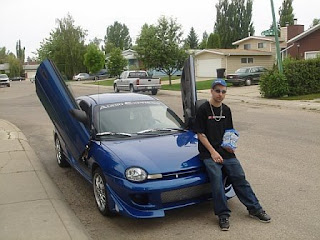 Throwing thousands of dollars at an econobox is really a bad idea.
Ladies, I hear he's available, and that 12-pack won't drink itself!  Hoo-Ha!


On the getoutofdebt site, there are lots of tearful testimonials sent in by readers about how they are in over their head in credit card debt and how they can't get out of it.  And oftentimes, these people want quick answers - can the government pay off my credit card?  (No). How about these debt relief companies? (No).

On thing they NEVER talk about is how they got thousands of dollars into debt in the first place.  After all, credit card debt doesn't "just happen" - you have to go out and use the card to get into debt.  So what is it that people spend all this money on?

As I noted in another posting, accumulating credit card debt is a sure sign you are living beyond your means, and that you need to cut back on expenses.  But people (including myself) are loathe to think about "cutting back" on anything at all, as they don't see their lifestyle as extravagant, at least as compared to their neighbors.  So they continue to spend, spend, spend, and end up bankrupt.

For young men, often the road to despair and debt is baited with automobiles.

Teenagers love to hop up cars, and have been doing so since time began.  It can be a lot of fun to work on a car, and of course, teens love the "hey, look at me!" aspect of car customizing.

But throwing a lot of money at a really poorly made car is a sure-fire recipe for a mountain of credit card debt and eventual financial stress.  And no, you can't turn a Neon, Corolla, Cobalt, Civic, or Focus (or any other "entry-level" car) into a "racing machine" by bolting on a few off-the-shelf parts from a catalog or the local hot rod shop.

What's that you say?  How can all those car magazines you read at the grocery store be wrong?  Ha-Ha, my friend, the latest issue of ricer-racer monthly is bought and paid for, in its entirety, by the people selling parts and accessories.  These are less periodicals than they are advertising supplements.  And only teens and 20-somethings are DUMB ENOUGH not to be able to tell the difference.

There are a number of pitfalls to "modding" a crap-mobile econo-box, in addition to the fact that it will never be a race car of any merit, no matter how much money you toss at it.

First of all, all those "mods" add no value to the car, and in fact, detract from it.  The nightmare Neon show above, belongs to a Canadian boy, who claims it is rear wheel drive (!!) but isn't sure of what the suspension is all about, according to the website he posted the picture on.  But he found the dollars for Lamborghini style door hinges and an air dam, though.  If you tried to sell this car, good luck, as the only one who would buy it would be some other kid, who thinks a Dodge Neon is a hot car and that putting scissors doors on it makes it "cool".

In other words, this car is worth less  than his Mom's faded Neon that is in good running condition and has had regular oil changes.  That car, at least, represents some transportation value.

Second, kids pile this crap on to cars like this, and then their friends come by at night and steal it all.  And the poor bloke in the photo finds out that his insurance doesn't cover the add-on parts.  And speaking of insurance, you know what his rates are like.  Owning a car, as a kid, is expensive enough without unnecessarily piling more money onto it.

Third, you spend thousands of dollars modding a car like this, and most young kids put it all on a credit card, helpfully offered to them at college at low, low rates, like 28%. And they never can pay it off or get beyond the minimum payment.  They have a "hot ride" (in the eyes of a 13-year-old neighbor) but are flat fucking broke.

And it is a typical scenario, I'm afraid.  20-something "dude" decides to build a "hot ride" by purchasing all the goodies from the catalog or online and then bolting them on the car, or by going to the local hop-up shop for a chameleon paint job and to the local stereo store for a boom-boom stereo.

For 20 minutes, it is an ego rush, as he is "the dude with the cool car."  But teens and 20-somethings fail to realize that hot cars become old used cars in very short order, and what was a "hot ride" a few years ago, is just another clapped-hot teenage hot-rod today.  Few, if any, of these cars survive long in the hands of young men.  And oftentimes the "mods" cause the car to seek an early grave.

You'd be better off saving your money and buying a secondhand Porsche, if you want to go-fast.  It would go faster, handle better, and hold its value more.  Of course, you can't afford the insurance for it right now, anyway, so why not start saving now, and when you turn 26 and the rates go down, you can pick up a well-loved 911 and REALLY have a performance car?  Just a suggestion.

You want to have a hobby car?  There are other ways to go about it than to just throw money at a clapped-out econobox.  There are some older sports cars out there - real sports cars - that you can buy for cheap, and take racing on the weekends, or autocrossing, or just touring.  And such cars can be had fairly cheaply and will hold their value.  You want a cheap sports car? One that will HANDLE?  Look for an older Miata - you can find one all day long, cared for by an adult driver, garaged, etc. for about five grand.  And you can track it.

But trying to take Mom's grocery-getter and make a race car out of it?

Seriously, only some teenaged kid would think that was even possible.

Going heavily into debt when you are in your 20's to "look cool" is about the dumbest thing you can do.  You will regret it for a decade, if not the rest of your life.

Massive credit card debt doesn't "just happen" to people.  You have to do something to make it happen.  And in many cases, for young men, the cause of a lot of misery begins and ends with four wheels.