Death of the Truck-Based SUV 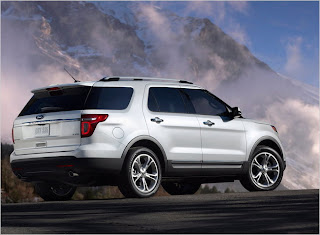 Ford's new Explorer is really just a wagon version of the Taurus.  The body-on-frame rear-wheel-drive based SUV is dying a slow death.
The Ford Explorer, once one of the most popular mid-sized SUVs, is gone.  In its place is something that, while it might be a nice car, is not really an Explorer.

GM already went this route when they dumped the Trailblazer - and like everything GM does, dumping it just as they got it right.  In its last years, the Trailblazer featured a BMW-like inline-six with variable valve timing, and an extended wheelbase that was roomy and comfortable.  Used Trailblazers can be had for cheap, and some owners report them going well over 200,000 miles.

But the Trailblazer is gone, replaced by something called a "Traverse" which also appears to be based on a front wheel drive unibody platform (Impala).   At least GM had the decency not to call it a Trailblazer.   And by the way, why is it that auto manufacturer's think that their websites should be chock-full of annoying videos and audio, long on hype and short on content?  Perhaps this reflects the nature of their vehicles - long on hype and short on content.

Chrysler has followed suit as well.  The Grand Cherokee was always a unibody platform, albeit a rear-wheel drive based one. The new version is based on Mercedes underpinnings, which bodes well for them.

But does this mean a Renaissance for the American mid-sized SUV?  Hardly.  To begin with, these vehicles are staggeringly expensive. Most sticker for a shade under $30,000 and easily option up to over $40,000 and beyond.  And since they no longer have their off-road street cred (a bit of an oxymoron there) one wonders why we need jacked-up station wagons like this anymore? (Answer:  Because people like them, just as they liked huge tail fins).

The unibody SUV handles better, rides better, and gets marginally better gas mileage than its truck-based cousins - 22-25 mpg versus 17-19.  And undoubtedly, it is also cheaper to build and less likely to generate those pesky roll-over class-action lawsuits.

The downside is, of course, it no longer is a truck, so towing capacity is limited a bit.  No more 7,000 lb. trailering, but a more modest 5,000.  But frankly, putting 7 grand behind an Explorer would have been the tail wagging the dog.

While the Americans have all switched over to the unibody SUV, of course the competition is way ahead.  BMW arguably created this segment in 2001 with the BMW X5, although that vehicle (I hate to say "truck") does have subframe assemblies and is rear-wheel drive based.

But the Asians are pulling ahead in this regard, making SUV-like vehicles from mini-van chassis.  Kia Motors new Sorento, assembled here in Georgia (Go Dawgs!) is quite popular, and a lot cheaper than its American Cousins.  The base Sorento, however, has a four-banger, which provides a little better gas mileage than the Explorer - in four-cylinder trim it is rated for 29 mpg highway. And yes, the old Sorento was a truck-based SUV, the new one based on old Hyundai Santa Fe bits.  But then again, it sells for about ten grand less than the Explorer ($19,000 to $29,000 depending on options).

It remains to be seen if Americans will pony up 30 grand for an Explorer.  From a personal perspective, that is a lot of dough to risk on an American car.  And quite frankly, the next car I buy will have to get better gas mileage than 20 mpg.

But then again, what I have parked in my garage already (with 100,000 miles on the clock) is arguably a better car that what is on Ford's showroom floor.
Newer Post Older Post Home