What is Lowermybills? What are data aggregation sites? 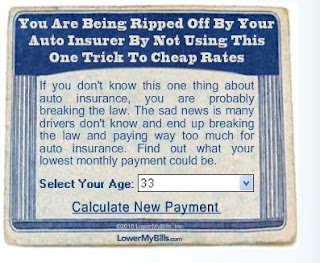 You've probably seen these annoying ads on the Internet.  The first thing that should tip you off is the use of Pavlovian response eye-catching marketing (here, using a worn Social Security card as eye-bait).  The second thing is the incomprehensible gibberish in the ads themselves.


Before I even researched this, I could see all the hallmarks of a scam.  And if you use your gut instincts, you don't even have to research something to figure out it is a scam.  The use of a Pavlovian response ad, for example, is a sure tip-off that no bargain is here.

It is a scam?  Well, they don't steal money from you.  Do they save you tons of money on car insurance or refinance your mortgage?  Well, no.  All they are is an information harvester and lead aggregator.

What they do is ask you for a lot of information online, then package that information and then sell it to companies looking for leads for new customers.  This site, for example, explains the model in a fairly reasonable manner.  Many folks feel that the site is a "rip-off" as they collect a lot of information, but all you get is a lot of spam, phone calls, and junk mail.

Could you get a good deal through one of these data aggregation sites?  After all, lowermybills is just one of a number of such sites.   There are a number of such sites for everything from home loans (lendingtree) to auto insurance, car rentals, cruises, airfare, and hotel rooms.  In fact, most Internet e-business models are based on some sort of aggregation.

For example, I used carrentals.com once to rent a car.  You type in the information for when and where you want to rent the car, and the site goes out and tries to find a cheap rental.

What was interesting about the site, however, is that one time, I rented a car through them, and when I got to the airport, the agency claimed they had no record of my reservation.  I showed them the paperwork, and the agent said, "Well, I can upgrade you to a better car for a lower rate, if you'd like".  In other words, they have to pay the aggregation site a fee for the "lead" and once I got to the counter, they played the game of pretending not to have my reservation, and then enticing me by offering me a better deal, so they would not have to pay the aggregator their fee.  Good news for me, bad news for carrentals.com

It is the same potential problem for Groupon - how do you police these deals and collect your fees?  The retailer has all the incentive in the world to offer a better deal to the person without the "Groupon" as they have to pay a whopping 50% to that site.  It does not bode well for Groupon in the long run.

(UPDATE:  This may be one reason why some small businesses will honor "expired" Groupons, as if they are expired, they don't have to pay the 50% fee to Groupon, but instead keep all the money.  It is one reason retailers may be willing to cheat Groupon as well, by offering better deals in the store if the customer forgoes the Groupon deal.   Why was Groupon important, again?).

I have tried some other aggregators in the past, and my experience has been the same as the complaints listed above about lowermybills.  Unlike Oribitz, Travelocity, and Carrentals, which provide you with immediate price quotes, other aggregator sites merely collect your data and then sell this information as "leads" to salesmen, who then contact you with some pretty mediocre deals.  So you type in all this data and get - spam, phone calls, and e-mails.

And by definition, the deals are pretty mediocre, as since they have to pay a "finders fee" to the aggregator, they cannot offer you the best deal possible, as their cost basis has increased.

But many mainline companies are getting in on the lead-selling business.  For example, when I log off from Bank of America, sometimes and ad pops up for GEICO, complete with a helpful link and an offer of a "discount" if I go to GEICO through the BOA site.  That sort of affiliation selling has been going on since time began.   Hertz rental car, for example, has agreements with every group known on the planet, to offer you 15% off on a car rental.  Of course, their rental rates are still no bargains.

And the car companies do the same deal.  You click on any of the automaker websites and they promise to provide you with an "online price quote" for a vehicle.  You enter in far too much personal data, and then are told "a salesman will contact you shortly!".  A few days later (often as much as a week) you get a half-hearted e-mail from a bored salesman with a mediocre price on a new vehicle which isn't anything like the model you specified.  He invites you to "come down to the dealership" to talk some more!

All it is, is a sales lead, nothing more - a chance to ensnare you into a trap.  They don't offer better prices on the Internet, because a majority of people are still stupid enough to walk into a dealer without researching a car first, and then get bent over the table on trade-in, pricing, financing, undercoating, floor mats, etc. - and are so stupid, they will walk away telling you how they "put one over" on the salesman.  They don't have to offer good deals on new cars, as the supply of idiots is nearly endless.

So the "get a quote now!" link on the automaker website is just another example of a data aggregation technique - they get leads and then send them out to the dealers nearest your house.  There is no real quote, so in a way it is a small lie.

Any business deal that you get into that is predicated on a lie - even a small lie - is probably a bad bet.

Aggregation sites are not really a "rip off" in most cases, but usually just an annoying waste of time.  Most just harvest data and then sell it off to salesmen.  The ones that provide actual price quotes and then booking links are often mediocre deals.

Most of the airlines, rental car agencies, and hotels have figured out that they are losing money by selling discount tickets to aggregation sites.  It took the major airlines a year or two, but they now have user-friendly sites where you can book flights at rates that are often cheaper than the aggregators.

So, in other words, if you want cheap car insurance, just go to www.geico.com or to the websites of the other major car insurers (GEICO will inevitably be cheaper, despite what the others claim).  If you have a lot of speeding tickets, an accident, or a DUI, you aren't going to get good insurance rates, period, so don't bother with an aggregator - they won't be able to save you much.