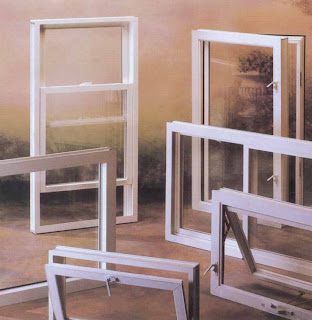 Vinyl Replacement Windows save energy, are maintenance-free, and will make your home quieter.  And they are relatively inexpensive, too!

A friend of mine bought an historic home and was dismayed to see that the previous owner had installed vinyl replacement windows.  The house was over 150 years old, and it sort of detracted from the value.  Worse yet, my friend did not have the money to replace them with reproduction wood windows, which would have cost a fortune.

While I sympathized with his plight, I told him, "Well, at least you won't have to paint them!".

Owning an historic structure might seem keen and all, but from a livability standpoint, a more modern home is easier and cheaper to live in - and you don't have to worry about ruining the "architectural integrity" of the place by making it energy-efficient and easier to live in.

Wood windows might be historic and all, but they are a pain in the ass to live with.  They have horrible insulation qualities, require constant painting and scraping, they rot out, they stick, they are hard to open, difficult to clean, and expensive to buy.

Vinyl replacement windows, on the other hand, can work for decades and never need painting.  They provide much better R-value in terms of insulation, and are easy to use - they never jam and even a child can open them with one finger.  They are easy to clean and even insulate against noise better than wood windows.  Oh, and they are very cheap, too.

When we decided to replace the rusty, leaky steel-framed casement windows on our 1948 tract home in Virginia (and please, don't call it "mid-Century modern" - it was just a cheaply built piece of postwar housing) we initially thought we needed to go "upscale" with wooden framed Anderson Windows.  We installed one, and it was a nightmare.  To begin with, one window was like $300.  And getting it to fit was problematic, as the openings had to be modified to fit the window, not vice-versa.  And as a wood window, even with cladding on the outside, it required staining or painting, maintenance, and it tended to be hard to open.

We threw in the towel and bought $99 double-insulated vinyl replacement windows at the local home improvement store instead.  They came in a size that was nearly equal to our window openings (and most can be ordered in custom sizes to fit) and were a snap to install.  We did the whole house for less than $2000 and our energy bill dropped by at least 20% after that.  Not only that, the house was quieter as well - you couldn't hear street noise as much.  And they sealed out drafts and dirt effectively.

They never jammed, stuck, or otherwise gave trouble or were hard to open.  And they swing in for easy cleaning.  They lived up to their reputation and worked as advertised.  And you know, not many things these days can be said to do that!

Are they tacky, cheesy, cheap, and low-rent?  Perhaps - if you live in a million-dollar mansion or an historic home, you can look down your noses at us "little people" and our crappy vinyl replacement windows.  But on the other hand, you can afford to hire someone to scrape and paint your windows every year or every other year.  And I guess when you want to open one of those swollen wooden windows, you can call the butler to do it and watch him huff and struggle.

Me, I will be happy with my vinyl replacement windows.  Sometimes, is it better to be middle-class than to go "upscale".  Going upscale often means just spending a lot more money for diminishing returns, and often means just more hassles.  I own four BMWs, so I know this!

We will be replacing our old wooden-framed single-pane windows in Georgia with vinyl replacement windows soon.  They look good and are appropriate for a 1970's-era tract home.  And I suspect we will recoup the cost in terms of energy savings, within a few years as well.

There is a tax credit for installing replacement windows that is set to expire this year.  They may renew it for next year, we'll see.  Like most tax credits, all it serves to do is increase the cost, as dealers pad their bills by the amount of the tax credit.

But even without the tax credit, it is still a cost-effective proposition.

A NOTE TO CONSUMERS:  Vinyl replacement windows are very cheap.  Avoid high-pressure salesmen who try to sell you these windows for staggeringly inflated prices.  Most home improvement stores sell the basic windows for $99 to $199, depending on size and configuration.  If you have to hire an installer, figure on about $99 to $199 per window for installation (perhaps less) depending on the window type and installation issues.  These can be a very cost-effective home improvement!

However, a lot of the loud advertisement places on TeeVee try to convince you that these windows are magic or are expensive - and get you to sign a contract (usually financed) to install windows for up to $700 to $1000 a window.  This is a LOT of money for vinyl replacement windows, and an utter rip-off.  So shop around and don't jump at the first offer you get.  And don't fall for the "limited time only" gags  used to get people to sign onerous contracts.

In the old days, there were a LOT of con artists in this field, as these windows were first developed.  Many were sold through informericals at inflated prices (avoid the informerical people entirely!).  As these windows morphed into the mainstream (they are pretty much standard in consumer-grade new construction) the prices have plummeted.  It is a lot harder to convince a consumer that a vinyl replacement window will cost them $1000 apiece, when the consumer sees them for sale at Lowe's for $99 each.

But there are still a lot of con-jobs out there, so caveat emptor!
Newer Post Older Post Home