Making Money from Other People's Weaknesses 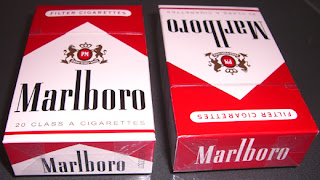 Invest in Death!  It does pay well..

You know how I feel about smoking.  Only idiots smoke - it costs a ton of dough, gives you no benefit whatsoever, and makes you smell like an outhouse.  Oh yea, it kills you in a horribly slow, painful and expensive manner.  What fun.  What's not to like?

But idiots smoke, usually poor people.  So why not get in on the fun and buy stock in Phillp Morris, now owned by Altria Group (Stock Symbol: MO)?

For starters, the stock pays dividends regularly.  Recent dividends are down from the glory days of 75 cents a share.  But the Board just declared a dividend of 38 cents a share:

So yes, that means you can still buy the stock today (December 21, 2010) and get the dividend.   The stock is trading at about $25.25 a share.   If you take that quarterly dividend, multiply it by four, divide by the stock price and multiply by 100, you get an annual rate of return, just on dividends of 6%.  And the company consistently pays dividends, too.

Now, of course, the company could go broke, or lose money, or stop paying dividends.  It might.  On the other hand, even at $10 a pack, people show no signs of giving up smoking, particularly the poor and ignorant (being redundant here!) who use these products.

And with the smoking lawsuit settlements, it doesn't appear that they will be subject to crippling liability suits in the near future.  Yes, the future of smoking is probably dim.  But that doesn't mean it won't be profitable.

And as some analysts have noted, there is no major R&D, advertising, or growth needed for these companies to hoard cash.  So they pay out good dividends - 5 to 7% or more, every year, year after year.  Not just Altria, but all the cigarette brands.

And hey, what about all those overseas sales - our biggest export, cancer!  (Actually, Phillip Morris International was spun off from Altria a few years back and handles the overseas sales and production of many PM brands).

Of course, it raises the question, will there be a shakeout or merger in the tobacco business as market share declines?  Perhaps.  Then again, perhaps not.  Despite the dramatic decrease in smoking over the last 20 years, the number of brands available, if anything, seems to be proliferating.

Now of course, some of you might have some of those pesky moral objections to owning stock in a cigarette company.  But hey, they also own 27% of  SAB Miller (the High Life people) and Chateau St. Michelle (which came as a bonus as part of a snuff package).  So it's not just cigarettes, its booze, too! (Kraft was spun off a few years back).  If you drink Stag's Leap wine, you're consuming an Altria product.

(Frankly, this is an area where they could increase market share substantially, but in this era of cheap wines, 2-buck-Chuck and Bronco Winery, it would require some aggressive management and marketing to make a go of it.  I suspect they may spin off the wine division as they did Kraft foods.  Either way, they could make money, though).

Some analysts look back on the good old days of Phillip Morris and think the company is headed for oblivion.  This may be true, but there is an alternative end game here.  While cigarettes will never reclaim their market share of the 1950's, they won't disappear entirely either.  There will be a consistent and profitable market for sin products, well into the future.  While market share might shrink, it will probably level out, eventually.

And if marijuana is legalized, well, they are in a good position to market that as well.  ;)
Newer Post Older Post Home