How Big A House? 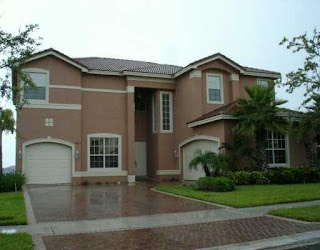 Real Estate Agents tell you to buy as much house as you can afford, as it is an " investment"  and moreover, your interest deduction will be larger if you borrow more.  Both are flawed arguments and buying a huge house is a bad idea for most folks.


How much house should you buy?  During the last decade, house size in America increased dramatically, as did the amenities of such a home.  Americans could afford more, or so they thought, and moreover, once they were done with the home, someone else would pay them even more for it!

Or so they thought.

Many people ended up crying in their soup or even killing themselves (I kid you not) when the re-po man came and took it all away.  No more vaulted ceilings, no more granite counter-tops, no more stainless steel appliances.  Some homeowners, in a fit of pique, smashed it all, before being evicted (dumb move, guess what?  You have to pay for that in the long run).

But of course, the joke was (and is) that they never "owned" these houses, anyway.  Most of these folks borrowed the entire purchase price, or pretty much close to it, and financed the whole she-bang with a funny-money, liar's loan, toxic mortgage.  And they thought they could sell it all before the music stopped.  But they didn't.

And we are supposed to feel sorry for them.  When it was our 401(k) that took the hit, our housing prices that tanked.  They walked away losing nothing, except a house they lived in for a few years without paying much for it.

But beyond all that - now that the dust has settled - do you want to buy one of these monster homes?  There are many on the market, for cheap, right now.  I don't think they are a good buy, for many reasons:

1.  Most were cheaply built:  Travertine marble and crown moldings aside, many of the "mini-mansions" of the 1990's and 2000's were atrociously built, with some of the cheapest materials around.  These are not investment homes built for the ages, but just jumbo tract homes with fancy fascias and trim pieces.  Underneath all the "Gee whiz" is just a Levittown cracker box, with vinyl siding, vinyl windows, and a 15-year shingle roof.  10 years into owning one of these nightmares, the contractor grade appliances and HVAC will all start to fall apart, and the real "bones" of the place will become readily apparent.  And replacing all of these sorts of things (like roofs) will be very costly, indeed.

2.  Utilities:  Living in a Jumbo home is fun and all, until you get the utility bill.  While most are fairly well insulated, they are still large homes, and most have huge glass areas, with the end result being a hefty air conditioning and heating bill.  So you will pay a LOT extra - like double - in utilities compared to a more modest, appropriately sized home.

3.  Taxes:  One reason a lot of people ended up not being able to afford these monsters were the five-digit property tax bills that the counties slapped on them.  Paying $12,000 to $15,000 a year - or more, in property taxes, is a staggering amount for anyone making "only" $100,000 a year or so.  Even if you are making a quarter-million a year, this is a lot of money.  Even if you own the house free and clear, you need to pony up $1000 a month just in taxes.

4.  Resale Value:  If the last housing bust is any guide (and I think it is) our housing prices will remain flat and appreciate slowly - like a normal housing market should - for the next decade or so.  Unless you get a bargain basement foreclosure price on a home (and chances are, you won't, banks aren't stupid and they aren't giving away properties, and when they do, investors usually pounce with cash).  So the chance of you "making a bundle" on one of these homes is slim.

Taking these factors all together, it is possible you may end up losing money on a home, or at least financially stressing yourself.

Assuming your average property taxes were $10,000 a year, you've paid $100,000 in property taxes over that time, plus another $60,000 in utility bills.  And your mortgage payment was likely a staggering $4000 a month, if not more.  Yes, you might "make" money in capital gains, but it is offset by the cost of owning the house.  It is a net wash.

On the other hand, if you bought a $250,000 house, that has taxes of about $5000 a year, and $250 a month in utilities, your tax and utility costs are half.  Granted the taxes and utilities offset any capital gain here as well.  But that illustrates the fallacy of buying "more house" in the premise that you will make "more money".  You come out even, either way.

But with the larger house, you've been paying double each month in terms of mortgage payments - money that could have gone into a real money-making investment.  Not only that, with the larger house, you are more financially stressed, and moreover cannot afford to lose your job or have any sort of financial setback along the way.  In the name of chasing "bigger and better" you have chained yourself to Real Estate - and left yourself no "cushion" in case things go wrong (hint: they often do!).

If instead of the "look at me" mansion, you lived in a smaller, more modest home, you could have paid off the house, pretty much, in the 10 year period, if you made the larger payment you would have, on a mini-mansion.  After 10 years, you'd have real equity and own your home free and clear, and not have to worry so much about losing jobs or other setbacks.

But unfortunately, for many Americans today, making more money means only "moving up" to a bigger and better house.  It was a game of musical chairs, frankly, and a lot of people were caught standing up when the music stopped.  Many folks were in the unfortunate position of owning two homes (having bought their next "dream home" before selling the older one) and had two mortgages.  Many of them went bankrupt.

Decades ago, the idea of "trading up" houses like they were used cars was pretty alien to most people. You sold your home only when you had to move, not for status reasons.  Or maybe you'd sell if you had another kid or needed the space.  But the idea of jumping from home to home, increasing debt load and monthly cash-flow requirements, was pretty alien, back then.

And the problem with these huge homes, is that while a lot of people thought they could afford them, few people actually can.  So who will buy these monsters?  Who will be willing to bankrupt themselves every month just heating and air conditioning these things?  The unit above is listed in Miramar, Florida, on a "Rent to Own" site for "only" $3,900 a month (plus utilities?).  Ouch.  That is a lot of dough to cough up every month, just so you can sneer at your neighbors.  Oh, right, you neighbors likely live in an identical house.

Better off to own less and really own it.  They guy in debt up to his eyeballs isn't "rich".  The guy renting the house shown above isn't "wealthy" - he has no wealth, only rent payments to make.  Real wealth comes from owning things, not paying for things over time.

And yes, I sort of got on to the big house bandwagon myself - in a different way.  I kept my original home in Virginia for many years, despite pressure from friends and co-workers to "move up" to something fancier in a plastic mini-mansion neighborhood.  Instead, we invested in income-producing rental properties and prospered.

For the last five years, however, we owned two homes, paid for with the money we made cashing in our rental properties before the bust.  It was fun, but it was like owning a mini-mansion, with high taxes (combined), high utilities, and other expenses, plus a pretty hefty mortgage payment.  We decided to sell one and live in the other, which allowed us to be debt-free.  It was a good choice.

Today, we have no financial stress, less worries, and are enjoying life a helluva lot more.  It was fun to be snowbirds, but a lot of work.  And moving forward, I can see where I want even less - one car, one bedroom, less stuff, less junk.  Sell it all and LIVE, not own things.