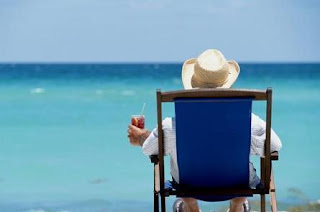 And that right there is the crux of the problem.  People use self-justification and poor normative cues to justify spending most of their income and saving little.  They spend hours a day being trained by the television that eating out at Chi-Chis is an inexpensive fun time, and good food, and hey, charge it all on your VISA card to get free airline miles?  Card over the limit?  Refinance your home, so those "Texas Nachos" are amortized over 30 years!
It sounds insane because it is.  But that is how a lot of Americans live these days - and I'm ashamed to say, I got sucked into it for a few years as well, at great cost to my personal finances and health.
So, retire at 40?  Yes it can be done, and moreover, it is probably a goal you should think about - or at least retiring at 50.  Why?  Because you may be booted out the door by then, anyway, and you will need to be in a situation where you don't have to work.
Of course, once you are in a situation where you don't have to work, work is not nearly as onerous.  For example, I could afford to retire now, but I still practice, part time to pay the bills, so I don't have to dip into my savings for daily living.  Since I have structured my life to be fairly inexpensive, on a day-to-day basis, I don't need to "hump" anymore to earn the big paycheck to pay off all my loan debts.
And I can tell you, it is a nice place to be.
Newer Post Older Post Home