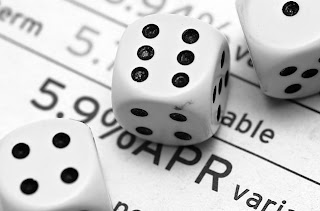 Payment Optional, Interest Only, and Adjustable Rate Mortgages are very dangerous financial instruments.  Pick-A-Pay was the worst of them and may finally have a stake driven through its heart by the financial meltdown.
Pick-A-Pay isn't a used car parts junkyard.  It was a bad idea that has since been junked. And like so many bad financial instruments, it was something sold to very dumb people, who thought that they could repeal the law of gravity or that that value of π could be rounded off to three.

And now that their world is colliding with reality, and reality is winning, they blame all their woes on Obama, of course.

The basic idea was this:  You could buy a million-dollar mini-mansion and not pay for it.  Seems like a simple enough concept, right?  To an idiot, to be sure.  But to us folks living in harsh reality-world, the first question is "Well, then who pays for it?"

The problem with Pick-A-Pay was that each month, the homeowner could "choose" from one of a number of payment "options".  But as explained in the link above, some of these options were not realistic.  Offering someone who cannot afford the home in the first place the "option" of making a payment based on a 15- or 30- year amortization is  specious.  If they could have afforded to do that, they would have qualified for such loans.

The other options were just horrible.  The homeowner could pay interest only at the actual rate, and thus the balance would never decrease over time.   Most homeowners in this category chose the worst option - which was to pay interest-only based on a fictitious interest rate.  The difference between the fake interest rate and the real rate was piled onto the balance of the loan, such that the loan balance actually increased over time.

The problem with that scenario, is that as the mortgage balance increases (and not by a small amount, but rather by over a thousand dollars for every payment, particularly for the mini-mansion type home) the remaining number of payments decreases.  So each successive payment, even at the artificially low "Pick-A-Pay" rate, goes higher and higher as the balance gets larger and the remaining payment period decreases.

What this means is that it is a mathematical certainty that the mortgage payment will continue to increase every month, until eventually,the homeowner cannot afford the property.

And many of these fictitious rates were only come-ons to get the buyer "into the home".  After a few years, the rate goes up to a fairly normal competitive rate - the one the buyer could not afford in the first place.  They were mortgages with foreclosure written into them!

And of course, this also means that the homeowner had no chance of refinancing to get out of this mess, as there was no equity in the home, even in a booming market where housing prices are increasing.  The balance on the loan increased faster than appreciation.

And refinancing is moot anyway, as if the homeowner didn't qualify for a 30-year fixed in the first place, they certainly wouldn't a few years later when the balance on the loan is even higher.

It is a bit like playing Russian Roulette, with six bullets in the gun. The result is preordained.

Most financial experts - responsible ones, anyway, spotted the trend years in advance - as our friend in the link above did.   But no one listened - and in fact shouted them down.  Today, these types of loans are pretty much dead, now.

But if you call them out on it in your blog, expect to get a grooming post from an industry shiller saying "Well, sometimes people need money for emergencies, and a payday loan can be handy!"

Buying a home is serious business, and in this day and age, it is foolish to assume that you can float your way above the negative equity of a "Pick-A-Pay" loan in the short term.  Housing prices are just not rising that high.  Even during the heyday of 20% annual equity gains in the housing markets, a "Pick-A-Pay" loan was little more than a break-even proposition.


These sorts of financial instruments are like juggling hand grenades with the pins out.  Yes, in theory, you can do it and not get hurt.  But all it takes is one slip-up and BAM! it takes you out.

And for what?  Granite Countertops?  A trendy vacation home?  STATUS?

Back in the early 2000's, the people who bought into the "Pick-A-Pay" way of life (debt) all looked down their noses at us "little people" who bought only what we could afford, and paid cash or did without.  Today, they are outraged that they have to give up possessions they never could afford in the first place - and demanding that the government bail them out, or that their loans be "modified" to accommodate them.  And, unfortunately, to some extent, the government is doing just that.

And this is sad, because it reinforces the notion (to some folks) that the debt society is the best way to go - run up your debts, declare bankruptcy, and then walk away or cram-down your lenders.  It is a nice theory, but for every person who gets away with it, there are 10 others who lose it all and have a sob story to tell.

It is smarter and safer in the long run to simply live within your means.
Newer Post Older Post Home