Is GM killing the Chevy Volt? 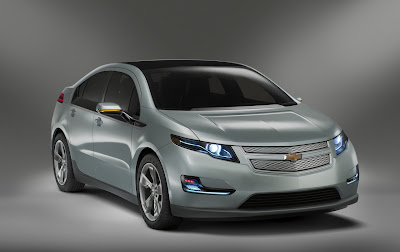 GM seems to be doing everything in its power to make sure the Chevy Volt is Stillborn.

GM has finally released the Volt.  Well, sort of.  Actually, it really isn't for sale, like a regular car.   In a few limited markets, you can "apply" to buy one, and if you are approved, they will build one to order.  Hmmmmm. And odd way to sell cars, no?  Actually, it mirrors the techniques they used to "sell" the EV-1.  In order to get an EV-1, you had to "apply" to get one, in a limited market, and then lease it.  And we all know how the EV-1 worked out.

Compare this to Toyota's marketing plan for the Prius.  You go to the dealer and buy one.  Done deal.

As with the ill-fated EV-1, GM is pushing leases for Volts, although this time around, they are allowing you to buy them, so it doesn't appear that all of them will end up in the crusher, as did the EV-1's.

Why is Chevy selling these vehicles in such a left-handed manner?  It is hard to say, but perhaps they fear that the technology is not mature yet, or that the cost of the vehicle is so prohibitive that mass-marketing them will be a cash hemorrhage.  And if technical problems develop with the car, it could be a financial nightmare for the struggling company.

Or perhaps they know that in a few years, a Republican government will scotch the $7500 tax rebates on the vehicle, making it even less affordable than before.

Whatever the reason, GM is making it so difficult to buy one of these vehicles that it would seem they are not serious about selling them.  Building each car to order is one way to insure that they will be costly to produce - and also a tacit admission that they don't want to make these cars, unless some enthusiast comes to them, cash in hand, with a specific intention to buy.  In other words, the assembly line won't run to build inventory, as Toyota does with its Prius line, but rather make cars on an as-needed basis.

In this manner, they can claim they fulfilled their promise to build the car, without actually building many of them.  And then later on, they can claim that "slow sales" necessitated killing off the line.  You can see this coming, a mile away.

The EPA rating isn't helping matters any.  The "all gas" EPA rating is a paltry 37 mpg, which is far lower than a standard Prius, which easily tops 40 and today gets a staggering 50 mpg city.  Granted, this 37 mpg value is based on gas-only operation, and in a composite electric mode, the "effective mileage" will be higher.

But it begs the question:  If the hybrid Prius gets 49/50 mpg, what mileage will the plug-in Prius get?  Surely higher than 37 mpg.  And perhaps this is an indication of the latent inefficiency of the series hybrid concept.

Whatever GMs reasoning is, they are doing a very slow, cautious rollout on the Volt, limiting sales to urban, upscale markets.  The Volt, apparently, like all-electric cars, is being marketed as a special-use, limited-use, second vehicle for the environmentally aware, and not as a general-purpose vehicle.  THey are marketing this like the Leaf, or like a GEM NEV, not like a Chevy Cruz.

GM's promotion and marketing seems to be stuck in an EV-1 mindset - that these are experimental, limited test-market vehicles, like Chrysler's ill-fated turbine car.  Just a technological showpiece that will hit the market in test numbers and then be yanked and crushed later on.

The mindset is clear in that GM is comparing the Volt to the Nissan Leaf in its press releases, which is like comparing apples and oranges.  Plug-in hybrid versus pure electric - it is no match - the plug-in hybrid wins.  But perhaps that is why GM is doing this, as comparing to the REAL competition, the plug-in Prius is not such a good deal.  And this may be, perhaps, because the plug-in Prius, being based on a standard hybrid that has been on the market for over a decade.

It is interesting to see that Toyota is being cautious with the introduction of its plug-in Prius, rolling out only a few test vehicles, and letting GM be first-to-market.  However, as I noted in an earlier posting, being first-to-market can be hazardous.  (The Honda Insight was first-to-market in the USA, and the Prius trounced it severely.  Toyota learned from Honda's mistakes).

Toyota will wait to see how GM fares before introducing their version.  And when Toyota introduces their version, it won't be in limited markets on an "application" basis, but rather through its entire marketing network - they already have a decade of experience selling hybrids, and thus no extensive dealer training will be needed.

I feel sorry for the Engineers at GM who worked on this project - but not too sorry.  You work at GM, you know the deal.  You build an amazing product that will make the company billions, and it will get sandbagged by some executive who thinks it is a threat to his pet project, or to his advancement in the company.  So no doubt, while there is a core group of dedicated Engineers and managers working on the Volt project, there is an equally dedicated group of managers on the 14th floor making sure that this experiment remains in the petri dish.  You just know there is some pinhead in marketing up there who thinks that American is just itching to get back behind the wheel of a 12-mpg Tahoe.


This is a shame, too, as if these plug-in hybrids could be marketed in a normal manner - as viable substitutes for general-purpose vehicles - they could be successful in the marketplace.  But by roping them off with police tape, GM is effectively sending a message that this car is not for everyone, and not intended to be.

And it is a double shame, as Toyota has had no trouble mass-marketing hybrids, and no doubt will end up the industry leader in plug-in hybrids.  In fact, if you think about it, who would you rather buy a plug-in hybrid from, the company that has been making hybrids for 10 years and defining the market, or the johnny-come-lately emerging from bankruptcy, doing half-hearted efforts?

GM will "pull the plug" on the Volt, claiming it was not cost-effective, leaving owners with limited parts availability and orphan cars.  In the meantime, Toyota will churn out plug-in Hybrids, negating GM's argument that there is no market for such cars.

If you are interested in buying a plug-in hybrid, I would suggest waiting a year or two and buying a Prius plug-in when it hits the market.  You will be able to buy one anywhere, without "applying" for the privilege to do so, or having to wait for it to be custom-built.  And you will be buying a car with a decade of hybrid experience behind it, and a reputation for Toyota quality.  And moreover, Toyota will put all its efforts into the vehicle, rather than half-hearted ones.  There will be no bitter executive at Toyota world headquarters trying to kill off the project in secret.  When the Japanese do something, they gather consensus and DO IT.  It is an entirely different mindset.

I wish this prediction were not true, but given GM's track record and their efforts with the Volt, it seems to be the way it is playing out.

And it reminds me, once again, why I stopped buying American-made cars.  When you are plunking down $40,000 for a car, which is a major investment, can you really afford to take a chance on a company that is so poorly managed and run?  Do you really want to invest that kind of capital on a car that even the maker views as a red-headed stepchild?  Americans have bought far too many Vegas and Fieros, Solstices, and the like.  The Chevy Volt will go the way of Saturn - another overblown fiasco that they spent way too much money on, gutted, and then trashed.  We know better than to trust GM to develop a new project and stick with it.