Donating to Charity While Heavily in Debt 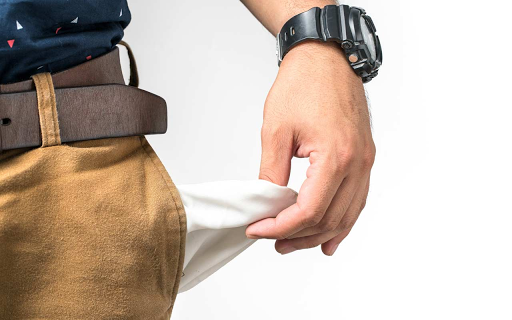 Should you donate to a church or charity when you are overwhelmed with debt?
Many people claim to be "altruistic" and donate huge sums to charity or tithe large sums to their church.  Or they meddle in their children's lives by doling out large sums of money to their adult children to "help them out in life" - while teaching them dependency.  This is all very well and fine, but if you are incurring debts - related or unrelated - while doling out charity money, you are not taking care of yourself as you should be.
Altruism can be evil, and oftentimes the reason people donate to charities or dole out money to family members is so that they can receive something in return.  Doling out money to family members allows people to exercise control or power over their adult children.  For charities, it is recognition from peers and community.  People get off on seeing their name on a list of donors - it is pure status to be able to say you have enough surplus income to donate to charity.  Look at me, I'm rich!  I'm in the celebrated donor's club!  But oftentimes, people are merely borrowing the money to do this by using their cash income for the donation, while using a credit card to buy their daily needs.
For example, one couple I know spend an enormous sum to have a stained glass window put in at a church, with a plaque on it with their name of course!  But at the same time, they were racking up credit card debt, living a lifestyle that was clearly beyond their means.  Years later, they ended up destitute, wishing they had that stained-glass money to retire on.  A church can make do with one less stained-glass window and one less indigent parishioner.
On one website, a person complains that while they are tithing $800 a month to their church, their $16,000 in credit card debt doesn't seem to be going away.  They need to make their credit card payments to VISA, not GOD, if the want the balance to go down.  And if they bankrupt themselves being "good Christians" they are not being pious, just idiots - and idiots that you and I will have to pay to support over time.
Yet another person claims a similar problem - $20,000 in credit card debt that is "intractable" and yet donating $1000 a month to charity.  They fail to see the connection.  In effect, they are CHARGING $1000 a month to charity and putting it on their credit card.
If you are in debt, you need to get out of it before you start giving away money.  And if you are giving away money while your debt load is increasing, you are living beyond your means - by definition.  You can't "afford" to give to charity as you are merely borrowing the money to do so.
Get your financial house in order first.  Cut your expenses, pay off your debts.  Once you do so, you will be able to donate surplus moneys to charity (all that interest you were paying, for example!).  But until then, you are just borrowing money to donate, and that is not a sound plan for either you or the charitable organization you are donating to.
Don't make yourself into yet another poor person who has to rely on charity to survive.  You are doing them no favor by creating a new customer for their services in yourself.
Take Care of Yourself.  It is a social obligation.  Once you have provided for your own needs, consider donating to charity.  But only after you have insured that you will not be a "charity case" yourself!
Newer Post Older Post Home