Cordless Power Tools - Are They Worthwhile? 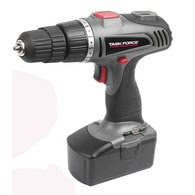 Cordless electric drills can be had for as little as $29 at Lowes.  Be sure to look for an 18V model and one that comes with more than one battery pack.  For occasional use, however, a cheap plug-in type drill might be a better deal in the long run.
Holiday season, and people are buying tools as presents.  Are cordless power tools a good deal?  It depends.  The way they are marketed, they can be a good deal or a total ripoff.  The big problem with these tools is that the battery packs cost more than the tool itself, which means once the battery dies, you have to throw away the tool.

My first cordless was a 9.5 Volt Ryobi drill. It worked well for many years, for homeowner tasks like occasional drilling, screwing, and the like.  However, the lower voltage drills do not work as well as the higher ones, and most contractors tend toward the 18V models which are predominant today.

The problem with the drill was that while it was cheap enough ($30 including carrying case, charger, battery, and drill bits) once the battery went south, there was little you could do to fix it.  Replacement batteries were at least $30 or more (sometimes as much as $50) so you are forced to throw out the drill and start over.

And the drill manufacturers change battery pack designs with regularity, so that even if you wanted to buy a new battery pack, chances are, they no longer make it.  So you are stuck with a drill that works perfectly well, but won't hold a charge, and you have to toss it.

My second drill was a 12V model (moving up in the world) which came with two battery packs, and a flashlight accessory.  Having two battery packs is essential, as if one dies, you can plug in another.  Otherwise, you have to wait 4-12 hours for the battery to charge, which is not practical in the middle of a project.  For that reason, I would recommend you NEVER buy one of these tools unless it comes with at LEAST two batteries, preferably more.

That drill went south when the charger died.  I tried to get a new charger for it, but for some reason, they were hard to come by.  Finally, I just had to toss it in the trash.  And the battery packs, after a number of years, didn't hold much of a charge, anyway.

I recently looked that this year's crop of rechargeable tools, all attractively packaged and priced for Holiday giving.  Many $99 "kits" include a number of tools (drill, circular saw, reciprocating saw, flashlight) but have only one battery.  This is not a good deal, as you will be switching batteries between tools if you use more than one.  Plus, while the drill is a useful tool, I am told that the circular saw stalls easily and doesn't have a lot of power, and is less useful as a result.  You would be better off giving someone a drill with two batteries than two or three tools with one battery, in my opinion.

Of course, the displays also sell extra batteries, and the Ryobi display at Home Depot was set up this way.  $99 for the set of tools and one battery.  Extra batteries were nearly $50 each.  Ouch.

And yet, many of the "gift packs" being touted this season feature lots of different tool heads and few batteries.  It is clever marketing on their part, as the recipient of the present will undoubtedly go back and buy extra batteries for the tools he received as a gift.


The fellows building my screened room used Ryobi tools, while others swear by Dewalt.  I was going to buy a 18V Ryobi set, with carrying case and two batteries for $80 when I saw the 18 V "Task Force" model shown above, sans carrying case (but with two batteries) for $29 at Lowes "while supplies last".  For a homeowner, this should be more than sufficient for the occasional drilling or screwing project.  It ain't no Ryobi, but then again, I'm no contractor, either.

Of course, if you are really on a budget and need to drill or screw-gun something only occasionally, then a rechargeable might not make any sense at all.  You can buy cheap "plug in" drills for around $20 - sometimes far less.  I bought one of these to drill some holes to install chairs in my boat, and it worked well.  A rechargeable, on the other hand, would have taken a few hours to charge initially, and would have gone dead during storage.  For the homeowner who doesn't do much home maintenance work, these are probably a more sensible solution, as you can toss this in a drawer and not worry about battery life or battery cost.  You can buy a cheap "plug in electric drill and it may last you the rest of your life.  Even the best battery-powered kind will be defunct in a matter of a few years.


I would walk away from rechargeable tools less than 18V, however, as it seems that most tools are gravitating towards higher voltages, and it would be easier to get replacement batteries for 18V tools than for say, the 9.2V or 12V kind.   Also less useful are the type of electric screwdrivers with cylindrical batteries.  These don't have a lot of torque, and while they might be a good screwdriver, they are no screw-gun (for driving screws into wood, without a pilot hole) or electric drill.  My experience with other types of tools using these cylindrical batteries has been poor.  One electric scrubber we bought pretty much lunched the batteries in less than a year.  It went into the trash in short order.

Contractors are increasingly finding rechargeable tools handy, however.  Once regarded as toys, they are more powerful and longer-lasting, and easier to use, as you don't have to snake extension cords all over the place (and have to constantly plug in the cord when it gets pulled out of the wall).  In terms of productivity, it is a time and money-saver.  And not surprisingly, most contractors have master charging stations that hold a half-dozen or more battery packs, so they are never "down" due to dead batteries.

Tools are remarkably cheap in this country, which is a handy thing, if you need tools.  I had to hammer drill through a foot thick concrete wall once, and it was cheaper to buy a Black and Decker "Firestorm" hammer drill than it was to rent a drill at the local tool rental place.  Once the holes were drilled, I sold the drill at a garage sale for not a lot less than what I paid for it.  If I ever need one again, I know where I can get one for cheap....
Newer Post Older Post Home