Who Killed the Electric Car This Time? (Cheap Gas) 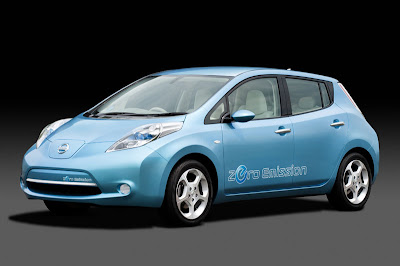 The first mainsteam electric car is on sale - again.  At nearly $33,000 before tax rebates, the Nissan Leaf is an expensive proposition.  Has the time come for the electric car - again?


The dream of the electric car.  It has gone on for ages, since I was a kid.  And conspiracy theories as to why electric cars died out (some of the first cars were electrics) have gone on as long as there have been automobiles.   As  I noted in my NEV posting, local-use electric cars really don't make much economic sense, and that, in short, is what has kept electric cars from being a mainstream success in the marketplace, until now.

Two decades ago, California mandated that major manufacturers build electric cars, and the automakers scrambled to modify existing designs or create new ones, to meet these requirements.  Some, such as the electric RAV-4, were merely electrified versions of existing cars.  Others, such as the GM EV-1 were radical technological showpieces.  But once the mandate for electric cars was squashed, most of these designs went away, and the province of electric cars returned to hobbyists and tinkerers, many of whom resented the intrusion of "mainstream" automakers into their niche hobby.

Who killed the electric car?  The movie of the same name explored this issue fairly evenhandedly, and I think came to the right conclusions - the technology just wasn't there at the time, with battery technology (lead-acid batteries) keeping range very low, and the lack of charging station infrastructure also a part of the problem.  But the real killer was cheap gas.   Gas dropped so far in price that electric vehicles, despite their touted efficiency, never really made sense financially - at least in limited production.

After the gas shocks of 2007, when gas shot up to $5 a gallon, and consumers wept at their foolishness in buying 10 mpg SUVs, automakers scrambled to offer alternatives.  Of course, Toyota already had its alternative - the hybrid - in production, and other automakers scrambled to copy the technology and put it into their product mix.  The problem was - and is - that hybrid technology adds thousands of dollars in cost to a car, and most consumers fail to appreciate things like fuel savings, when a car costs $10,000 more than its non-hybrid counterpart.

For example, Ford offers its popular Fusion in 6-cylinder, 4-cylinder, and hybrid models.  Guess which one sells best?  While the miserly four-bangers sold well initially, as the price of gas has dropped (and the memories of $5 gas fade) customers are opting for higher-end upscale models.  And the difference in mileage between the hybrid model and four-cylinder model is such that you'd have to own the car for many years to recoup the cost in terms of fuel savings.  Many consumers simply prefer to pay less for a car, and pay more at the pump, as they feel they have more control over the process.  It also allows them to finance "more car" even if it is more costly overall.  Leather seats, Navigation, and sunroofs trump gas mileage, unless there is a crises mentality going on at the pump.

And as I noted in an earlier posting, getting 40 or even 50 mpg from a car is not hard to do - we did it in the 1980's with a plethora of  vehicles, including the Diesel Rabbit, Diesel Chevette, and the 3-cylinder Geo Metro.   Small car, small engine, good gas mileage.  But when gas is cheap, consumers gravitate toward larger cars like moths to a flame.  An apt analogy, too, as the consumer ends up getting "burned" when gas prices go back up.

At the present time, worldwide demand for oil is dropping - which is the conundrum of the electric or hybrid car.  The less fuel we use, the lower the price of fuel becomes.  Lower fuel prices make electrics or hybrids less attractive.  So every time you buy an alternative fuel vehicle, you end up decreasing demand for such vehicles.  Sales of hybrids and electrics will be what kills hybrids and electrics, oddly enough.  As we move toward electric or hyper-miler cars, the price of fuel will drop accordingly, and we will end up chasing our own tail, at least to some extent.

But maybe this time around, things will be different?  Perhaps.  Two things are changing that might make electric, or at least plug-in hybrids, a technology that will stick.  First is battery type - the Lithium Ion battery has been demonstrated as being a much superior alternative to lead-acid, in terms of energy density.  The second is the effective unlimited range that plug-in hybrids provide.  For the latter reason, plug-in hybrids may be the ultimate "winner" in the electric car wars, while pure electrics like the Nissan Leaf may take a long time to catch on.

Israel recently announced that it was going to become independent of oil in the next decade.  It is an ambitious effort, spurred on by political issues, not technological ones.  As it turns out, the people who own most of the oil in the world are not very nice people (ask the folks in Southern Sudan, if you doubt this).  But as it turns out, most valuable commodities end up being in the hands of odious people of one sort or another.  And this time around, the "must have" commodity is Lithium.  And the new Ayatollah of Lithium is the Leftist President of Bolivia and the new Saudi Arabia of Lithium is Chile.  Um, talk about out of the frying pan.  It is only a matter of time before we are at war with Bolivia, right?

But the solving the battery problem alone might not put the electric car in everyone's garage.  Even if they could have a range of 200 miles or more (an unheard-of number today) these types of cars would be specialty vehicles or second cars.  After all, you could not drive one on vacation, without stopping often.  And even the fastest charging stations would take an hour or more to recharge such a battery pack.  I'm afraid for the near and even long-term future, the idea of the electric car "replacing" the IC engine car will remain a fantasy.  Perhaps in a smaller country like Israel, one could use electric vehicles in this way.  But in the USA, where trips can last hundreds and hundreds of miles (I drove 250 just today) an electric vehicle is not going to replace the IC engine just yet.

However, plug-in hybrids like the Chevy Volt (series hybrid) or the Plug-in-Prius (parallel hybrid) show a way that electric cars could make "sense" as a primary vehicle for a family.  For local use, they can be plugged in and the IC engine not run until range is exceeded.  For many people, this might mean months of driving without using the internal combustion engine (which will lead to all sorts of interesting engine storage issues - perhaps they will have to borrow Evinrude's self-storage technology?).

But for the family vacation or a longer trip, such a vehicle could be used, in hybrid mode, and still return excellent gas mileage.  Once the family arrives at their destination, the vehicle can be plugged in and then run in electric-only mode.  A plug-in hybrid could replace the traditional family sedan, whereas a pure electric could not.

So who is killing the electric car this time around?  Plug-in hybrids, would be my answer.  If the choice is between a $33,000 Nissan Leaf all-electric, with limited functionality, and a Plug-in Prius or Chevy Volt, with a price tag closer to $40,000 - but able to drive from coast-to-coast and back, the plug-in hybrids win, hands down, even if  they cost more to buy.  You are getting a car that is totally functional, not a special-use or limited-use vehicle, like an NEV.

But cheap gas may kill off the plug-in hybrids as well.  We are slated for another "shortage" here on the East Coast, as a Canadian refinery goes off-line (we are so dependent on refinery capacity in the USA that it is scary).  But even if that pushes gas to $4 a gallon, the disruption may be only temporary.  And as we have seen from the last gas spike to $5, consumer memory is very short, indeed.  Less than two years later, and consumers are flocking to showrooms and snapping up relative gas-hogs of cars.

So long as gas prices remain low, hybrids will be more of a fashion statement than an economically viable solution.  And the plug-in hybrid will likely, in the long run, be the "electric car" of the future, if the electric car is to have any future at all.

Pure electrics, like the Leaf, will be a tough sell.  And I'm afraid that the NEV is merely a short-lived fad, unless the cost and reliability of those vehicles could be significantly improved.  Lithium Ion batteries might make a NEV last longer between battery overhauls, but it would also significantly increase the cost of an NEV to close to that of a regular electric car.  A fully-loaded GEM electric, with exotic options, such as doors and a 3-year warranty, can run you close to $20,000, which is within shooting distance of the Nissan Leaf, after the tax rebate ($25,000).  And of course, that same twenty grand makes a nice down payment on a plug-in Prius or Chevy Volt.

But at the present time, you can buy a pretty well loaded IC car for less than the cost of a plug-in hybrid or even a Nissan Leaf.  A stripped Toyota Camry starts at under 20 grand, list, and even well optioned up, is hard to break 30 grand.  The difference in fuel mileage between such a car (30 mpg) and a hybrid (45 mpg) amounts to about 167 gallons of gas a year (at 15,000 miles annual driving).  Even at a staggering $4 a gallon, this amounts to a savings of only about $670 a year in fuel.  You'd have to wait 10 years to pay back a $6700 delta in vehicle cost.  And the delta in vehicle cost could be much, much higher than that!

And unfortunately, that is the sort of math the average consumer, including me, is looking at.  Should I spend 40 grand on a plug-in hybrid like the Chevy Volt or Toyota Prius plug-in?  Even with a $7500 tax credit, the vehicle cost is still well over $30,000.  For the same price, I could buy a fairly loaded Camry, or for about 10 grand less, I could buy a nicely appointed one (as nicely appointed as a plug-in hybrid).  And the local Toyota dealer is offering rebates and year-end deals on Camrys - but not on plug-in-hybrids.

In personal finance, you have to do the cost-benefit analysis on every aspect of your life.  And most people, other than those trying to make a style statement, do that type of analysis and realize that hybrids, while an interesting technology, are not that cost-effective so long as gas stays cheap.

And with newer emissions technology, they may not be an environmentally sound alternative as well.  So long as we burn coal to make electricity, plug-in hybrids are not "solving" the Carbon-Dioxide emissions problem - merely moving it to another point in the energy matrix.

So, while I am rooting for these new technologies and want to see them succeed in the marketplace, I won't be parking one in my driveway anytime soon.
Newer Post Older Post Home